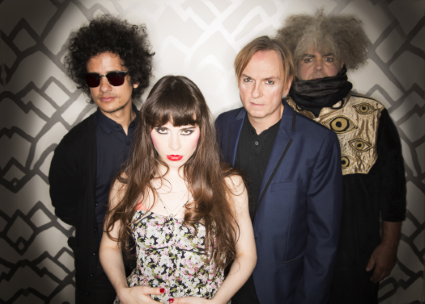 What do you get when you combine a Mexican Garage Punk singer, a Avant-Garde, signer/songwriter/producer from Puerto Rico via Texas and a couple Sludge Punkers from sleepy small town on the upper west coast? Crystal Fairy of course.

It might seem like an unlikely musical match up until you hear the primal pounding energy that’s psychedelic, psychotic, off kilter, unsafe and uncommon.
Look out Mary Poppins, here comes Puff the Magic Dragon!

The whole idea for Crystal Fairy began when The Melvins and Le Butcherettes toured together and The Melvins started doing the song “Rebel Girl” with Teri at the end of their set.
“The chemistry was on fire, not just on stage but off stage,” explains Teri. “During the Chaos As Usual Tour, Omar caught up with us on The Melvins tour because he is an admirer. Through the travels, The Melvins and Omar connected as well. Sometimes, Omar and I would fantasize loudly of hopefully being able to create something together.”
“Teri is a force of nature performer extraordinaire,” said Buzz. “It seemed like the obvious thing to do to ask both Teri AND Omar if they’d like to write some music with us. It’s the sort of thing you write down on a card and stick in your locker. It’s true blue and I couldn’t wait to get in the studio with them. Dale and I were thrilled they agreed to work with us.”

“Things moved quickly once we all got in a room together,” adds Dale of the band’s El Paso and Los Angeles recording sessions. “In the first few days we had six songs written and recorded. It was quite comfortable working together and things gelled between us instantly. The hardest part of starting a new band was coming up with the band name. We were working on a song and Teri was recording the vocals. It was the first time we heard the lyrics and when she came to the line ‘my name is Crystal Fairy,’ I nearly fell backwards out of my chair.

“Things moved quickly,” said Omar, “Most of the songs were written and recorded over Pho while watching cannibal movies. Nothing in moderation.”

Teri sings, plays guitar and keyboards, Omar plays bass, Buzzo plays guitar and Dale on drums. It’s simple, sturdy and perfect. Between the four members they have like 150 years of musical experience and something like 40,000 records. A shit load. And yet, Crystal Fairy is different, special and brings a new dimension to what these four players do… a stunning combination of punk, metal, psycho rock, blood rock and rabid rhythmic excitement.

Teri’s vocals are piercingly heartfelt and powerful in ways we’ve never heard from her. This is tribal rock music at it’s best without being pretentious.
It’s conjuring and fiendish with Teri exploring her demented obsessions lyrically while the band lays down a driving musical force field of whip smart powerful noise.

The band’s self-produced, self-titled debut arrives this February, with a limited edition 7” featuring songs “Drugs on the Bus” and “Necklace of Divorce” selling out the day it went on sale. Look for Crystal Fairy tour dates in 2017.

For tour dates, including the Chicago stop, click here