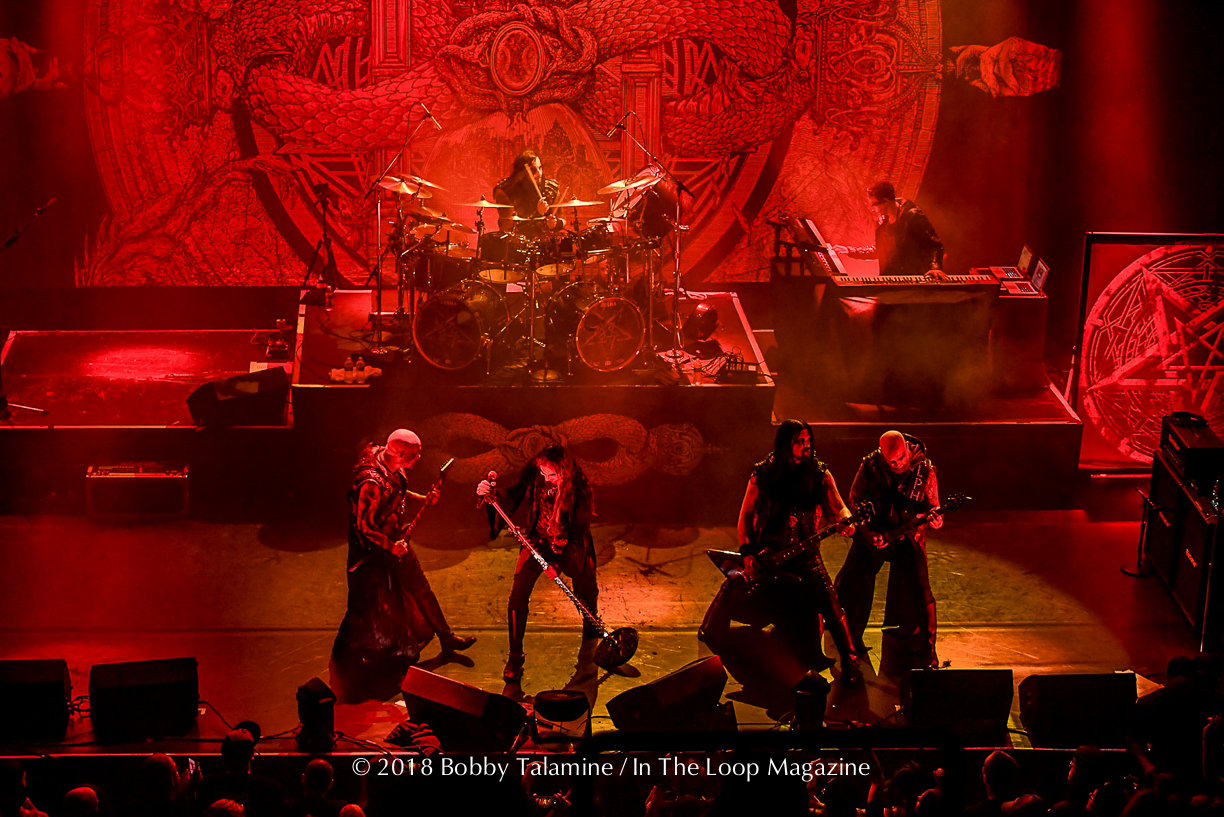 Norwegian Black Metal. True Norwegian Black Metal. Let that sink in for a minute. This genre of music – Black Metal- unites and divides like no other. If you have been together as a group for a couple of decades, like Dimmu Borgir have, and stay true to your roots, but yet explore other possibilities of where the music can go- then you have a say in musical extremes and ingenuity to enlighten and enthrall the masses. And hopefully as far as live performance, they will come- the musically devoted. And arrive they did, bright and early waiting in line to get into the Vic Theatre here in Chicago.

There’s a long and thin alley just to the south of the Vic, for loading in and out and such, with a couple devoted Dimmu fans a couple hours before the show with stacks of vinyl hoping to cross paths with Shagrath, lead singer of Dimmu to hopefully get some autographs. The line itself before the doors opened to the venue was pretty impressive, going south to the corner of Barry and Sheffield and then heading east.

I saw lots of fans in corpse makeup, like their idols in Dimmu, and heavy in black t shirts and black- everything. Dimmu Borgir are truly at the forefront of Black Metal, and their kind of music is as relevant today as when this genre first started and people took notice. Look at the list of the mighty that have come forth from the Nordic fjords: Darkthrone, Satyricon,Enslaved, and of course Mayhem, let alone the mighty Emperor.

Let’s try to not be nit picky with Dimmu’s song selection for this evening’s show. Suffice it to say they do have a new album out- “Eonian”, and if their backdrop is any indication, this album cover means diabolical business, down to the horizontal snakes embracing all from within. And so they open with the first song off their new album- “The Unveiling”.

Dimmu haven’t skipped a beat with this song. Still timeless, still maximum output of textbook Norwegian Black Metal. A mighty song this is.
And we’re on a merry roller coaster from there- with riff upon mighty riff, song after song, scary vocal on top of scary vocal. A lot of this ravenous energy and pure maximum enjoyment of all things Dimmu has to be held front and center with lead vocalist Shagrath, and his holding court and and keeping the faithful in line and in his spell song after song. This guy means business, and shows it quite a few times during the show, with references to “Chicago”, stated in such a way that he means the apocalypse may happen tomorrow, so live for tonight my friends, even though it’s only Tuesday. And so the faithful did, when looking at the crowd and the balcony. The devoted are present, and making their presence known after each and every song.

The next song is also off of “Eonian” – “Interdimensional Summit”- another mind blowing example of extremes, down to some heavy over the top keyboards fighting it’s way into the mix amongst the mighty guitars of Galder and Silenoz.

Deep in the setlist from tonight’s show is another new song: “Council of Wolves and Snakes” a song I found captivating witnessing first hand from the balcony of the Vic. This song is also true textbook Norwegian Black Metal, but it also is intertwined with a Nordic tribal / folk appeal: a song that bleeds ambiance and haunting atmospherics, with keyboard accompaniment which gives a silent nod and wink to the mighty Burzum, but done with class adding to the otherworldly experience. This song deserves repeated listens, no question.

Let’s not forget that this show by Dimmu is also devoted to their classics of yore- “The Chosen Legacy” from 2007, “The Serpentine Offering”, Puritania” from 2001, and of course “Mourning Palace” from way back in 1997, to name a few. A hard and heavy setlist without a doubt, and a show that still has my ears ringing a couple days after it’s conclusion.

Dimmu Borgir clearly will never compromise. And that’s all fine by me. There’s no easy way to describe them, especially when performing live.
They clearly have a stranglehold on all things dark and mysterious, with a dash of shock and awe.

Openers Macabre, an American extreme metal band from Chicago, had a short but interesting set from the get go: a band interested in all things Dahmer and John Wayne Gacy with a dash of Texas Chainsaw Massacre, multiplied with nursery rhyme-ish lyrics. Macabre’s sickening and yet funny sense of humor makes for a quizzical yet entertaining performance to say the least. It’s like hearing morbid campfire songs done at full volume with a dash of hardcore and grindecore.

Setlist: Dimmu Borgir live in Chicago at The Vic Theatre 08-21-18