Deadmau5 Brings His New And Massive “Cube 2.1” To The Aragon Ballroom 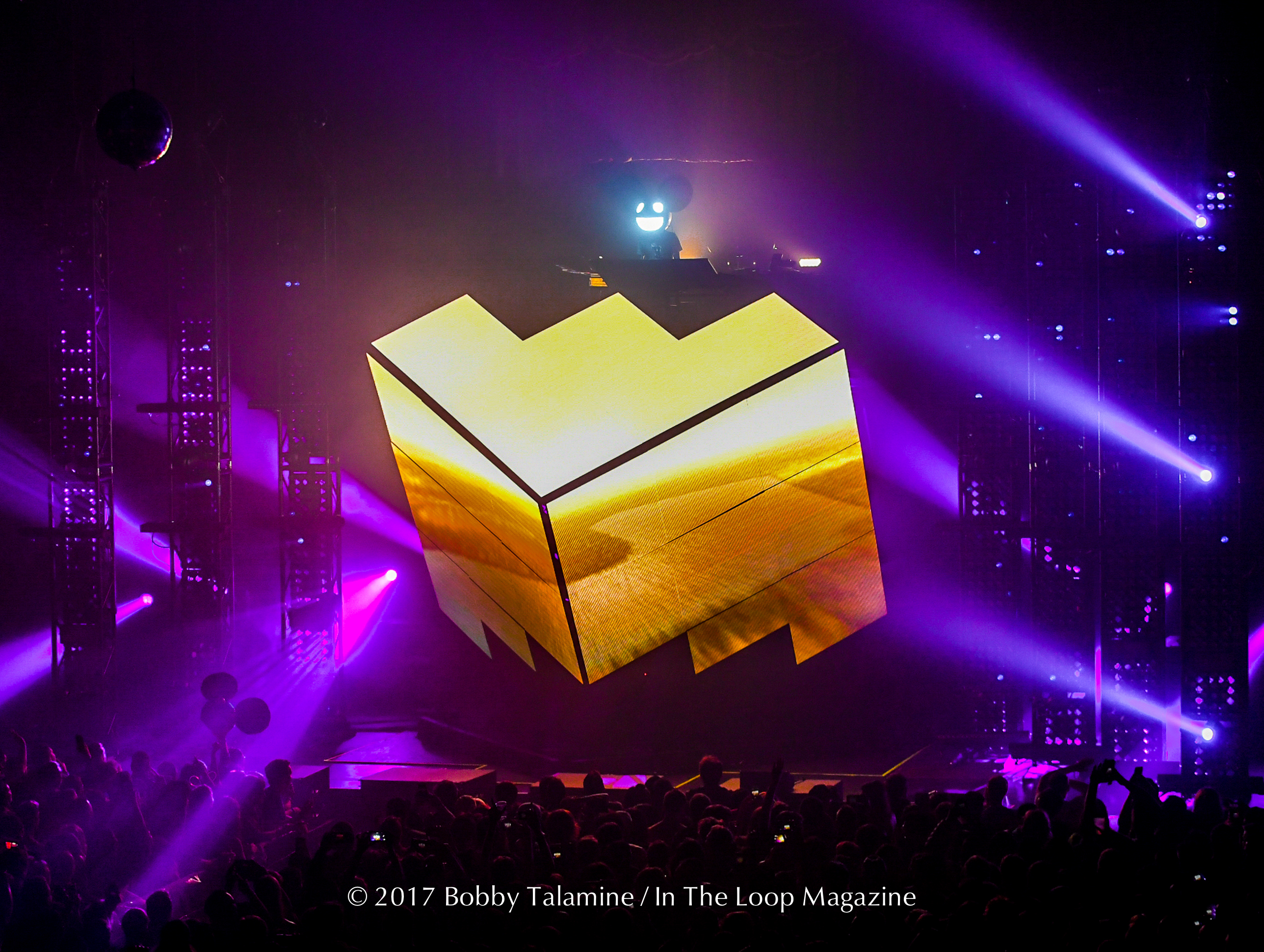 First off, let me say that this latest production from Deadmau5, arguably the most creative and influential of all the current touring DJ’s on the road today, is a total standout. Massive in scope and size, jaw dropping in the visuals, quite astounding also in the audio and low end bass. Put it this way: The US military has the “Mother of all Bombs” that they recently dropped in Afghanistan. Okay: Joel Zimmerman (Deadmau5) has the mother of all performance rigs in his latest touring production, called the “Cube 2.1”. I can’t see how any other comparable DJ will be able to top this rig.

It’s a head scratcher for loading in and out of these old school dancehalls, like the Aragon in particular, which was built in the 1920’s. Jolly (Roger), a long time fixture for loading in bands in the Chicagoland area, knew he had his hands full with this production. Some of the specs and logistical nightmares: They had to cut down the stage at the Aragon to allow the rig to fit in under the curtains of the ceiling. Now that’s tall my friends. Even with Deadmua5’s mouse ears on, he was approximately 1 to 2 feet below the ceiling curtain. The average height of the stage for a typical Aragon show: 7 to 8 feet. For Deadmau5: chopped down to 4 feet. And still not much wiggle room. This sucker is big and heavy, doubling in size and width and weight of his previous rig.

Cube 2.1 has a total height of 19 feet, but that’s not including supports underneath, and the consoles on the top for Joel to do his music. My estimate puts it higher than the balconies: around 26 to 30 feet total. The weight of this behemoth: 10,500 pounds. So, when deferring to the load in crew: no wonder they looked tired and exhausted.

On to the show itself:

Joel Zimmerman still has a comedy routine down that politely scolds all other DJ’s that don’t take risks and continue to live in purgatory. He has a point: when coming down from the cube to roam about the stage midway through his set, he still was in fine critical form, cigarette and beer in hand, as a guy who has his big middle finger at the ready to pounce on “Lazy DJ’s”, while looking at visuals of his cat, Meowingtons, talking to the audience about this and that, then going back up the steps of the rig (gave up the count after 13), saying out loud “we should build an elevator for this thing and have The Chainsmokers pay for it”. Damn right. I mean is there even any comparison besides maybe a console or synth or two? Don’t think so.

If anything, if you were to ask Joel one on one himself, the digs against fellow performers is complacency and lack of motivation to attempt anything new and bold. He has his likes and dislikes in this genre of music. I’m in agreement with him, to set the record straight. And that goes for all genres of music as well. I want more from my established artists. Up and comers too. Do me justice- I’ll promote you proud. Laughable music, bring laughable results.

Deadmau5 is a unique standout in EDM: he still talks to the crowd mid song, and has the feel of a homeboy mixing it up and improvising to set the mood. The setlist might be pre planned, but keeping the mood fresh and extending songs is not. The Cube 2.1, along with the accompanying music, is a massive achievement of engineering and creativity. It’s the perfect marriage of Deadmau5’s catalog meshed with his most popular songs, like “Ghosts n’ Stuff”, “The Veldt” and “Raise Your Weapon” in particular.

The amazing and concise video panels surrounding the Cube sets the mood right time and time again, transforming the Aragon into a video game palace only you feel immersed in the production, even without taking mood enhancing drugs. It’s visual and music overload. On Steroids.

Have to say, two days after seeing this show, his last of this current tour dubbed the “Lots of Shows in a Row Tour” – I’m still reeling from the fallout and aftermath of what I witnessed. And I love that. I want more.

If you missed this event, Deadmau5 is back in a few months: he’s headlining the North Coast Music Festival in September, so you’re in luck.

Setlist for Deadmau5 live in Chicago at the Aragon Ballroom May 5, 2017

1: Imaginary Friends / Beneath With Me