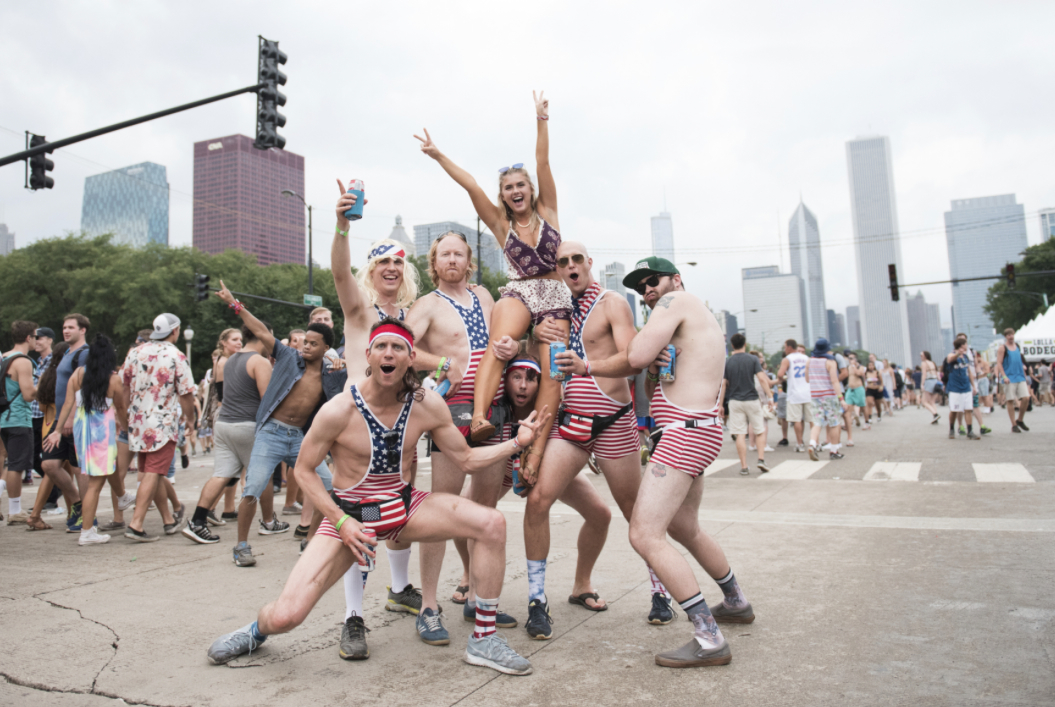 Foals– Foal’s afternoon set could have been bogged down by the rain, but they broke through the haze with an explosive performance on the Samsung stage. Their set’s first half displayed the band’s most impressive chops. “Olympic Airways”, “My Number”, and “Mountain at My Gates” were seamlessly tied together with well-executed transitions and were built with amazing guitar symmetry. Guitarists Yannis Philippakis and Jimmy Smith played off each other well and put together riffs reminiscent of their British counterparts, Bloc Party. Philippakis also displayed loads of energy behind the microphone and rocked out on and off the stage using his wireless guitar rig.

While the first half made it impossible not to catch on to their sound, they lost the audience a bit during the middle of their set with a chunk of low tempo tracks. The setlist seemed a bit disconnected and divided the emotional impact behind their songs too much, leading the crowd to drift off a bit before their exciting conclusion. Nonetheless, Foals put on a convincing performance that helped revive the crowd for the evening to come.

M83– Considering all of the indie electronic acts playing Lollapalooza this year, M83 is one of the most veteran performers who has deeply explored the potential of the genre. The band played an array of material from their catalog and did it all with amazing stage presence on Friday.

When Anthony Gonzalez walked on stage, he thanked the crowd within minutes— the festival has paid the band lots of respect in their past appearance, and they surely added to it. Most of their set was built by their wildly successful Hurry Up, We’re Dreaming, which helped pick up the crowd’s excitement from the very beginning. Their performance of tracks from their new album Junk fit well with the festival atmosphere and featured guest vocalist Mai Lan. They also revamped some older tracks to fit the character of their explosive live band, most notably the chip-tuned “Sitting” and a funked up version of “We Want the Sky” with some slap bass.

M83 made all of that possible without any laptops and featured a number of interesting instruments. Their touring saxophone player also played an EWI, a wind-powered MIDI controller that looks like an electronic clarinet. His solos on both instruments were complex and invigorated the audience with his impressive chops. The band’s guitarist/multi-instrumentalist also rocked out with a theremin, jumping from side-to-side as his hands manipulated the sound waves coming from the instrument’s silver rod and collapsing to the ground afterwards. Gonzalez’s huge Moog synthesizer also put together catchy repetitive loops that sent fans ears into a dreamy daze.

Radiohead– Radiohead’s headlining performance at Lollapalooza on Friday felt like a homecoming performance— many respect their 2008 set as one of the best in the festival’s history, and it was easy to pick out the many members of their dedicated fanbase walking around Grant Park. The attendees of this year’s Lollapalooza are much different than the more rock-oriented crowd of 2008 (especially since Perry’s stage was nonexistent), but Radiohead still succeeded producing another historical performance that won over old and new fans.

Radiohead launched into their set with the first two tracks from A Moon Shaped Pool, which suffered from sound issues but were excellent nonetheless. The audience is at its most silent and polite at the beginning of a show, allowing the band pull off the sparing “Daydreaming”. They picked up the pace with “Ful-Stop”, sparking the most energetic thread of songs of the evening with “My Iron Lung”, “2+2=5”, and “Myxomatosis”. This helped them compete with the rumbling bass from Martin Garrix’s set at Perry’s stage, which could be overheard at times throughout the night.

The band was very jammy, as they often are, but they included some interesting production behind some of their tracks. Thom’s vocals were twisted into psychedelic loops in the background of “The Gloaming” and “Everything In Its Right Place”, which were fun to dream in as they repeated and gave the band prime opportunity to instrumentally improvise. The deep-house electronica of “The Gloaming” included a male radio recording that faded in and out throughout the song reminiscent of the band’s critiques of the media attempting to control our interpretation of the world around us.

In happenstance, the world seemed to compliment Radiohead’s performance with some fantastically random events. After making it through a long, rainy day at the festival, it drizzled again during “Identikit”, which features the lyric “broken hearts, make it rain”. To me, that was a fulfilling moment as a Radiohead fan— many fans, including myself, approach their music with a wounded heart wanting to be fulfilled, and after feeling the rain fall at the show, it exposed the scars from those hard times and made them worth celebrating with the band. Fireworks also exploded some before or after “Everything In Its Right Place” somewhere around Navy Pier, which is similar timing to when the explosions appeared during their 2008 set. The only element that is still left up to interpretation is the QRC code spinning in the band’s light setup during “Ideoteque”— what could the band possibly be telling us through the web address linked to to the image?

After watching Thom throughout the evening, I think his recent divorce, as its explicitly on A Moon Shaped Pool, has truly set him free and positively impacted his stage presence. He walked around stage with a sexy lure, in a way— he knew he could act however he liked and receive a positive response. Most notably, he delivered a sexy roar during the first half of “Bodysnatchers” and landed a crotch grab during “Ideoteque”. This confidence was also seen when he screamed the final lyrics of “Climbing Up the Walls” into his acoustic guitar and knocked out a cool synth solo before “Everything In Its Right Place”, resulting in a small laugh when the crowd realized Thom ran out of notes to play towards the end.

The best part of a Radiohead show, though, is seeing how all of the songs come together, thanks to each member’s unique genius. Ed O’Brien’s vocals on “Weird Fishes/Arpeggi” and “Karma Police” were sung loudly by the crowd during their respective moments, and it was cool to see how he plays around with their sound with the distance between the microphone and his mouth. Jonny Greenwood came out on stage playing his guitar with a bow, explored the stage playing a number of instruments, nailed his solos, and constructed some beautifully intricate guitar loops on stage, most notably during “The Present Tense”. Colin Greenwood’s bass shook from the sound system’s screaming bass volume levels, but it worked in the band’s favor during “Nude”, “Daydreaming”, and “Myxomatosis”. Lastly, Phil Selway and guest drummer Clive Deamer unloaded a number of complex percussive rhythms when the band played the newer material, while Selway manned the drum kit on his own during their pre-King of Limbs material. He exploded most during “2+2-5” and “Paranoid Android”.

The glowing ray of sunshine of the performance was “Let Down”, a deep cut from OK Computer that was perfectly executed given the nature of their recent material. Similar to many songs on A Moon Shaped Pool, the song’s lyrical content is deeply reflective and emotional while the instrumentation is brightly optimistic and adventurous. Radiohead resurrected the track perfectly and created a cry-worthy moment for all in attendance, or at least that was my moment. Radiohead has the capability to stir up some deeply intimate emotions through their music, and I’m sure many others had a similar reaction during their perfectly-executed closing performance to Friday.