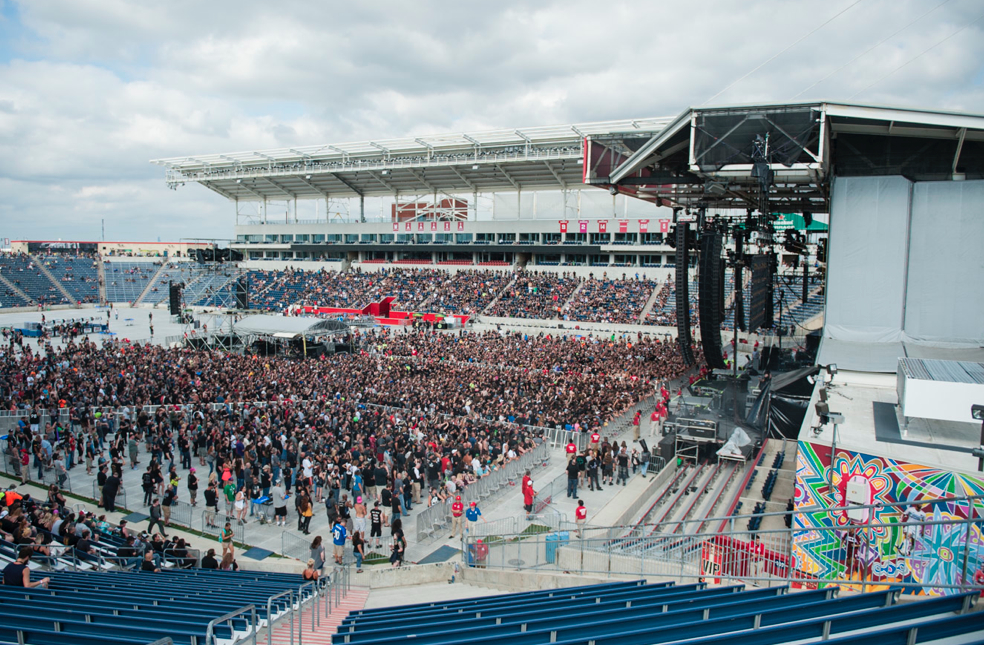 Returning to Toyota Park in Bridgeview for its second year, Chicago Open Air Festival kicked off with some of the biggest names in rock and metal on Friday night.

Whitechapel, Suicide Silence, and Code Orange were among early afternoon highlights, and ex-Slipknot drummer Joey Jordison’s new outfit Vimic got things warmed up before a six-hour wave of headliners took to both stages.

New York thrash-metal pioneers Anthrax have been touring behind their most recent release (2016’s For All Kings) for nearly two years now and show no signs of slowing down, and new songs like “Breathing Lightning” fit seamlessly in the set with older favorites like “Madhouse” and opener “Caught in a Mosh.” After thirty-five years, the band can’t resist having fun on stage, whether it’s nicking a cameraman’s rig for a few minutes to get the crowd going or teasing a bit of KISS’s “Parasite,” a nod to Friday’s headliners (and one of Anthrax’s most acknowledged favorites).

Next up was Friday’s MVP: Megadeth. Nearing the end of their tour for last year’s Dystopia, Dave Mustaine and company proved themselves yet again to be the most technically proficient of the old-school thrash acts, savagely tearing through new cuts like ‘The Threat is Real’ as well as a smattering of classics including opener ‘Hangar 18’ and the legendary (look it up) ‘Mechanix,’ without a doubt the day’s biggest musical curveball. The “Megadeth vs. Metallica” debate will likely outlive us all, and the band has seen its share of demons in the past, but the current lineup featuring Mustaine, guitarist Kiko Loureiro, new drummer Dirk Verbeuren, and longtime bassist David Ellefson, is perhaps the band’s strongest ever – no small statement considering the level of talent that Mustaine has surrounded himself with over the years. Never one for much stage banter, Mustaine let the music do the talking, and talk it did – Megadeth brought the house down, and let’s hope we see another full tour with this foursome before the Dystopia cycle is finished.

Swedish quintet Meshuggah took the Blackcraft stage in broad daylight but you wouldn’t have known it from the lightshow that very nearly replicated their headlining setup, nor from the almost shocking volume that overtook every corner of the park. Meshuggah’s sound falls somewhere between math rock and prog-metal with a bit of industrial thrown in, and the effect is absolutely crushing – it would be no surprise to see them on the main stage next year.

Near the end of his set, Rob Zombie remarked, “I used to look at the cover of KISS Alive and think, ‘man, that looks like a fun job’ – and it IS a fun job!” Indeed, no one bring fun to horror quite like Rob Zombie, and he proved it alongside bassist Piggy D, drummer Ginger Fish, and guitarist-who-gets-better-with-each-passing-second John 5 for an hour of gory rabble-rousing. Zombie is an artist who truly knows the stage, missing no opportunity to get the crowd involved, frequently jumping into the pit while the band (who are a much tighter unit that they’re likely given credit for, incidentally) read his cues, from an impromptu rendition of “Blitzkrieg Bop” to White Zombie classics “Thunder Kiss ’65” and “More Human Than Human” to solo material like the now-classic “Living Dead Girl” and new tune “Gore Whore,” all accompanied by images of classic horror, sci-fi, and exploitation films. Zombie’s shows combine the best elements of rock and metal – except instead of the crowd tossing around beachballs, they toss around inflatable alien sex dolls from the band members. Beat that.

If any band could, it’s KISS. By the time Paul Stanley, Gene Simmons, Tommy Thayer, and Eric Singer took the stage, the crowd was sufficiently amped, and a ninety-minute set of some of the most classic songs in rock kept the party rolling until nearly midnight. “Love Gun,” “Deuce,” “God of Thunder.” Rarely played deep-cuts “Flaming Youth” and “War Machine.” Simmons’ fire-breathing and blood-spitting, Stanley’s flight out to a satellite stage in the middle of the arena for a stomping rendition of “Psycho Circus.” Enough confetti and fireworks to obscure the horizon for hours afterward. KISS, once again, brought out every trick in their extensive playbook, bringing the first night of COA 2017 to a stellar close.