Day Of Metal In Tinley Park As We Say Goodbye To An Icon In Music: Slayer’s Reign In Blood Comes To An End In Chicagoland 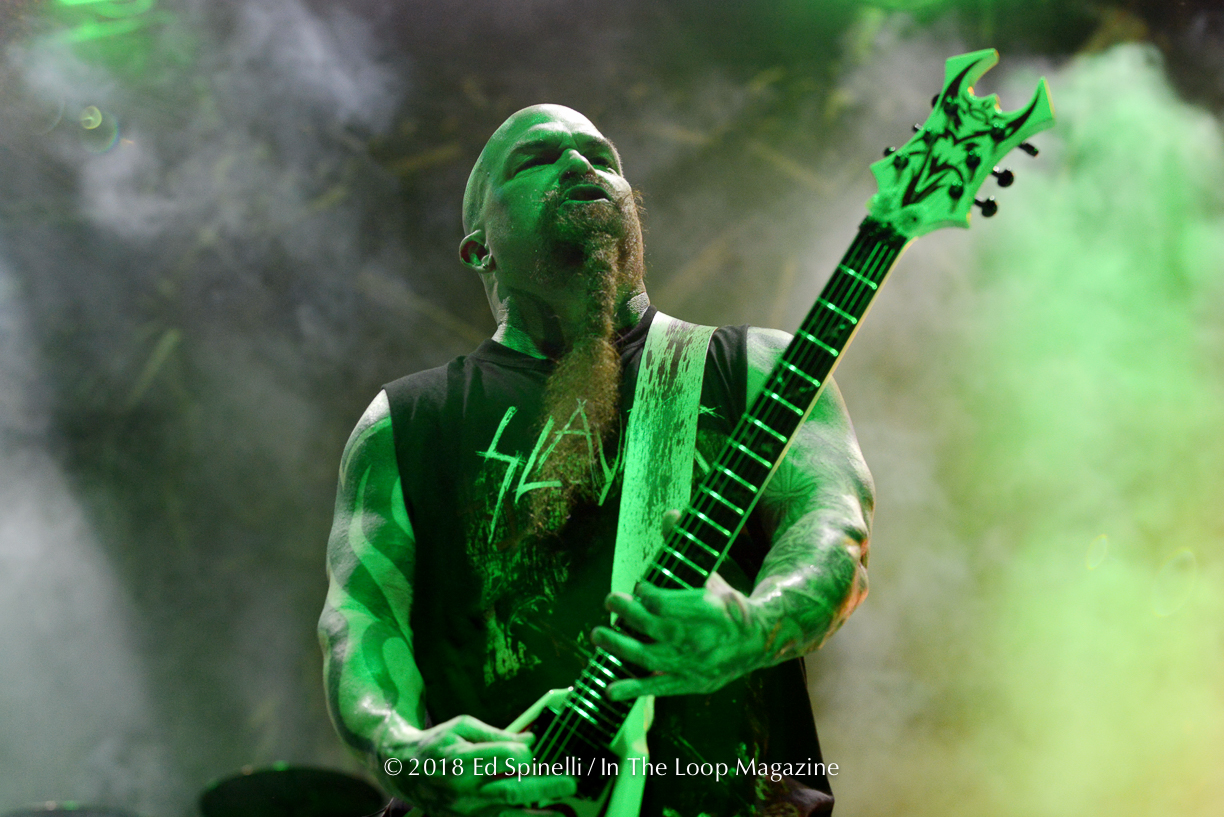 Letter From The Editor:

This past Memorial Day weekend, we got a chance to witness greatest come and go. One of the big four in heavy metal music, Slayer, is calling it quits. This was concert was billed as their last live performance in the Chicagoland area – ever. The Hollywood Casino Amphitheatre in Tinley Park, IL was home to the metal madness that included an almost full day of heavy bands to satisfy most any metalhead’s needs. This could have been toughed as a mini festival it was so jammed packed with music. Starting in the late afternoon, the opening act was Testament followed by Behemoth, Anthrax, Lamb of God and finally, Slayer. Here is our collaborative story on that event as told by several of our journalists who each take a view on a specific point of the show with words and photos.

Two openers worthy of being a part of Slayer’s Farewell Tour.

Testament: A heavy hitter in American Thrash Metal, with a career spanning over three decades and a punch that still connects, and the ability to still raise a ruckus. A lot of that is owed to the band’s mighty sound, courtesy of the one and only Alex Skolnick, who when with the band, brings them to another level of sonic onslaught. That’s not a slight on the other guys- Eric Peterson brings the might as well, along with Gene Hoglan on drums, Steve Di Giorgio on bass, and of course Chuck Billy bringing the force needed on vocal with his trademark shouts and screams. This is a band that knows their time slot is around a half an hour, and you might as well refrain from the bullshit and pull off one heavy tune after another, with no compromises. But Alex Skonick…man oh man is this guy on another level with his guitar and his mighty sound. All n’ all, a great set.

Now we turn to the one of the best extreme metal bands: Behemoth. Talk about being blown away, especially at 6pm and the sun still shining. Hard to grasp this band playing in the early evening, and not complete night time. Nevertheless, Nergal and his mates bring the dark and sinister no matter what the time of day. There truly is nothing like the sound and brute force of the mighty Behemoth. The band , lead by Nergal, provide a message that’s part shock value, and a sound so huge and honest and to the point, that it clearly for me takes a while to let it sink all in.

Such a massive performance, especially from Nergal, playing the part of the blackened and diabolical St Paul, questioning everything and railing against organized religion, with his band kicking into extra brutal mode at a moments notice, to clearly get that point across. This band has their identifiable sound down in spades- Volume? Check. Speed? Check. Intensity with a strong message? Check. Truly, Nergal and Behemoth know that time is of the essence, and seeing how appropriate it is to be involved with Slayer’s farewell tour- they have a time slot as well that although minimal at just over a half hour, you might as well make it a mini show within a show, what with an encore tune crammed into the 30 minutes allotted. And that they do, what with the black devil masks at the end of the show, playing the most dark and sinister instrumental that gives you chills to the bone. Behemoth- the absolute gold standard of all extreme metal. Truly elite and uncompromising.

Setlist: Testament live at Hollywood Casino Amphitheatre, Tinley Park, IL May 25, 2018:
1: Brotherhood of the Snake
2: Rise Up
3: Practice What You Preach
4: The Pale King
5: Into the Pit
6: The New Order
7: Disciples of the Watch

The night was upon us saying farewell to Slayer, one of the “Big Four” of trash metal. So it was fitting that their friends, Anthrax would be one of the opening acts of the night. Anthrax’s set opened up with Iron Maiden’s song “The Number of the Beast” played on the speakers. I read online that Gene Hoglan filled in for Charlie Benante on drums a few days ago in Canada, because of Charlie’s carpal tunnel, so I was extremely glad to see Charlie take his seat behind the drums for the show tonight. The crowd cheered as Johathan Donais, Frank Bello and Scott Ian walked onto the stage waving their arms and yelling to us to get the intensity up. Following Charlie’s opening lead the band started off their forty minute set with “Caught In A Mosh”. In true Joey Belladona fashion, Joey ran out onto the stage to the crowd cheering louder. He made sure the crowd was having a great time as he interacted with everyone throughout the venue. There was a nice sized mosh pit in the middle of the crowd thrashing around to the song. Keeping up the night’s magnitude, they played their first cover of the night “Got The Time”. Which is great to hear the surrounding crowd sing along.

Going back further into their collection of hits they then played “I Am the Law” and then even going back a year earlier with “Madhouse”. After “Madhouse” Scott talked to the crowd and asked if we love thrash metal? We responded with loud cheers and screams of appreciation. He introduced “Evil Twin”, the next high intensity song on their set and the only new song from their last studio album. Bringing it back to 1988, the band played “Antisocial” another cover that they have made their own.

The Midwest has made a great following for heavy metal music and it definitely showed with the non-stop moshing and horns in the air to Anthrax’s set. We could not agree more with Joey when he addressed the crowd and asked how do we do it. He said the crowd always brings it during the shows and that Chicago is the best! The crowd brings it because the band delivers the excitement live and show no signs of slowing down. Neither the crowd nor the band slowed down for “Indians” the closing song. From the moshing, singing along and the screams for more, the crowd and I am sure the band had a great time. If you get a chance to see Slayer on their farewell tour do it, but be sure to get there early and catch Anthrax’s set!

Every good thing comes to an end – and unfortunately, so does every evil thing.

Slayer, thrash metal’s longest running purveyors of Satanic speed, have officially embarked on their final world tour, and to that end, played their final show in the Chicagoland area to a Tinley Park audience 26,000 strong – the largest headlining show in Slayer’s career. The Slaytanic legions were out in full voice and, from the moment two huge flaming pentagrams announced their arrival with the assault of “Repentless,” they reminded every metalhead in attendance why they’ve gained the respect, credibility, and long-lasting musical career offered to so few, in the grand scheme of things.

Leading the day were Testament, Behemoth, and Anthrax, who all delivered blistering sets under the unusually hot May afternoon, and as dusk fell, Lamb of God hit the stage with all the subtlety of a wrecking ball. Long-time tourmates, Lamb and Slayer have crossed the nation many times over the last twenty years or so, and vocalist Randy Blythe gave multiple shoutouts to the road-warrior legacy left by the bands. Leading the quintet through signature tunes like “Walk With Me In Hell” and “512,” Blythe’s energy is always infectious; while the band’s style of metal is a bit more dense and chunky than Slayer’s melodic style of thrash, there’s a lot of crossover in terms of fanbase that was apparent from the get-go, and as the set ended in darkness, the stage was adorned with a giant backdrop featuring a bleeding Christ being terrorized by black-lit demons.

Slayer’s departure might not be a huge surprise to the faithful; since founding guitarist Jeff Hanneman’s death in 2013 and drummer Dave Lombardo’s departure around the same time, questions have abounded, both in the fan community as well as within the band. Bassist/vocalist Tom Araya has stated publicly on numerous occasions that the future of the band remained in the air; regardless, the seemingly sudden announcement hit the metal community hard earlier this year. But with the stage engulfed in flames as the band tore through seminal catalog classics like “Black Magic” and “Seasons in the Abyss,” as well as deeper cuts like 2006’s savage “Jihad” (a look at 9/11 through the eyes of the terrorists and dark even by Slayer standards) and “Blood Red,” it was hard to imagine a better time, honestly, for the band to go out. This was a finely-oiled machine of angry, violent heavy metal, the kind that gave heavy metal its dark reputation in the first place. In a genre now oversaturated with evil imagery, lyrics designed to shock the most open-minded listener, and every other cliche one can think of, it’s easy to forget that, in America, Slayer helped pioneer what become thrash metal and black metal on a global stage, and they did it with the chops, attitude, and most horrifying album covers a metal fan could hope for.

Guitarists Kerry King and Gary Holt (surely the hardest working man in showbiz these days, given his continued role in Exodus as well) aligned perfectly throughout, trading solos with a frenzy; the foursome was in top form from start to finish, and Araya could barely contain his satisfaction at the crowd’s intensity; rare grins came out periodically as he stalked each end of the stage during what few breakdowns there were. For the most part, the band avoided the slow or mid-tempo burners; thrash and (dare I say) singalongs were the order of the night. The entire amphitheater was in strangely unified voice during the choruses of “Dead Skin Mask” and “South of Heaven,” and “Raining Blood” – a live highlight for over thirty years now – turned the already swirling mosh pit into a full-on riot. By the end of “Angel of Death,” the stage was adorned with a giant mock Heineken logo bearing the name HANNEMAN, and underneath “Still Reigning,” and as the last song of the night came to an end, the band took their bows while tossing out picks and drumsticks like it was their final night on earth. Even King, whose often stoic attitude precedes him, stood and basked in the crowd’s shouts and adulation for a few minutes, smiling down at the pit before raising his fists in triumph – an understated thank you for nearly four decades of touring – and left the stage.

All things come to an end. But Slayer is still with us, and forever will they reign in blood.