David Bowie Is… One Incredible Display of a Rock Icons Career: The David Bowie Exhibit in Chicago 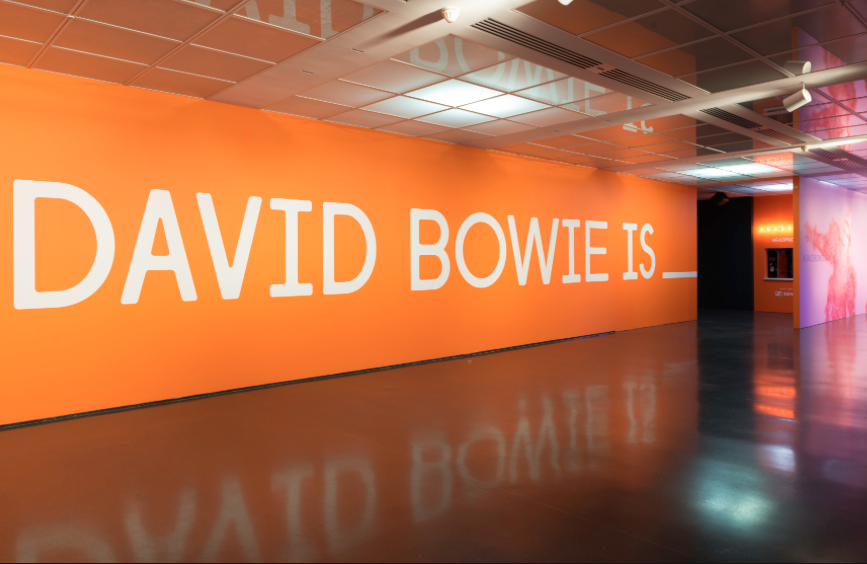 Outside the MCA Chicago is a two story image of David Bowie from the Aladdin Sane album cover. The one done by photographer Brian Duffy. It features a pale, shirtless Bowie sporting his then trademark dyed red/orange mullet and of course striped lightning bolt down one eye. This slightly different version from the one we’ve grown accustom to since its 1973 release. In this version, Bowie’s eyes are open as if giving us the impression of readiness. Letting us know, there’s something special going on here behind these walls. What you thought you knew about David Bowie is about to go through cha-cha-changes.

And change they did as we soon learned entering the Thin White Dukes transported palace of personal possessions. This exhibit proves to be more than just Hunky Dory, but a true Sound and Vision experience that Young Americans in Chicago will call Modern Love.

David Bowie Is… presents the first retrospective of the extraordinary career of the man himself. Bowie has been labeled by many as the most pioneering and influential performer of a generation including artists like Lady Gaga who has publically gashed about the man since her start.

This exhibit features so much, in such a huge space, it took me a couple times of going through it to get it all. In the space you’ll see personal items from Bowie like Fashion, hand written notes, lyrics and memos to some of his most iconic songs, set designs, album artwork, videos of rare performances, photography and much, much more, literally hundreds of items on display. Bowie has been a collector of art for years. You’ll even see pieces from Warhol and Basquiat.

There are multimedia points where you can listen to Bowie speak about the making of things, where he got ideas for projects, live performances and interview sessions. (make sure you get the self guided iPod tour player).

When you first enter, it begins like a walk through Bowie’s life itself. You start at the very early years when he was still known as Davy Jones. See things he had as a youth growing up in the UK like the trombone his mother bought him (replica on the US tour due to it’s fragility). Travel through this timeline of Fame and experience how a David Bowie production took place.

You’ll marvel at the amazing cloths and costumes that made him a Space Oddity. See original artwork he created. Hear the music from The Man Who Sold The World and even witness some puppetry along the way. A surprise piece was seeing the Goblin King’s crystal ball from the movie Labyrinth.

With the surprise release of “The Next Day” recently and talk of a new record in the works, this seems to be a sort of resurgence of all things Bowie. Proving that Bowie’s Fame isn’t going anywhere.

In one of the final rooms, you’ll be immersed into a live David Bowie concert experience. Video walls filled with Bowie, his bands and music pumping through the hall at near live concert decibels.

Since you can’t see Bowie live anymore, this is a great alternative. Another is seeing the local Chicago based supergroup (Led by fellow Brit, Chris Connelly) Sons of the Silent Age, but that’s another story for a different digital page.

When you’ve experienced it all, you exit the exhibit and go Dancing In The Streets into the David Bowie Is… gift shop. It’s loaded with collectables, souvenirs and wears for all ages. A couple things in particular that stood out to me were the 7” records and limited edition autographed program guides. The books were quite cashy, but to a true collector worth it. Especially since it’s nearly impossible to get an autograph from the man as he seems to have disappeared from the lime light the past decade or so since announcing he’d no longer tour due mainly to health reasons.

David Bowie has always been a unique showman and real Rebel Rebel. There just hasn’t been another like him. He’s a true performer, not just a musician. Yes, he’s created some of the most memorable songs in the history of recorded music, but he’s also an actor, producer, traditional artist and theatrical performer. This collection chronicles the mans life very well. It really shows his diverse, eccentric background that spans nearly 50 years.

David Bowie Is… runs from September 23rd to January 4, 2015. It’s located at the Museum of Contemporary Arts Center in Chicago.

For more info on the David Bowie Is… exhibit in Chicago at the MCA, click here