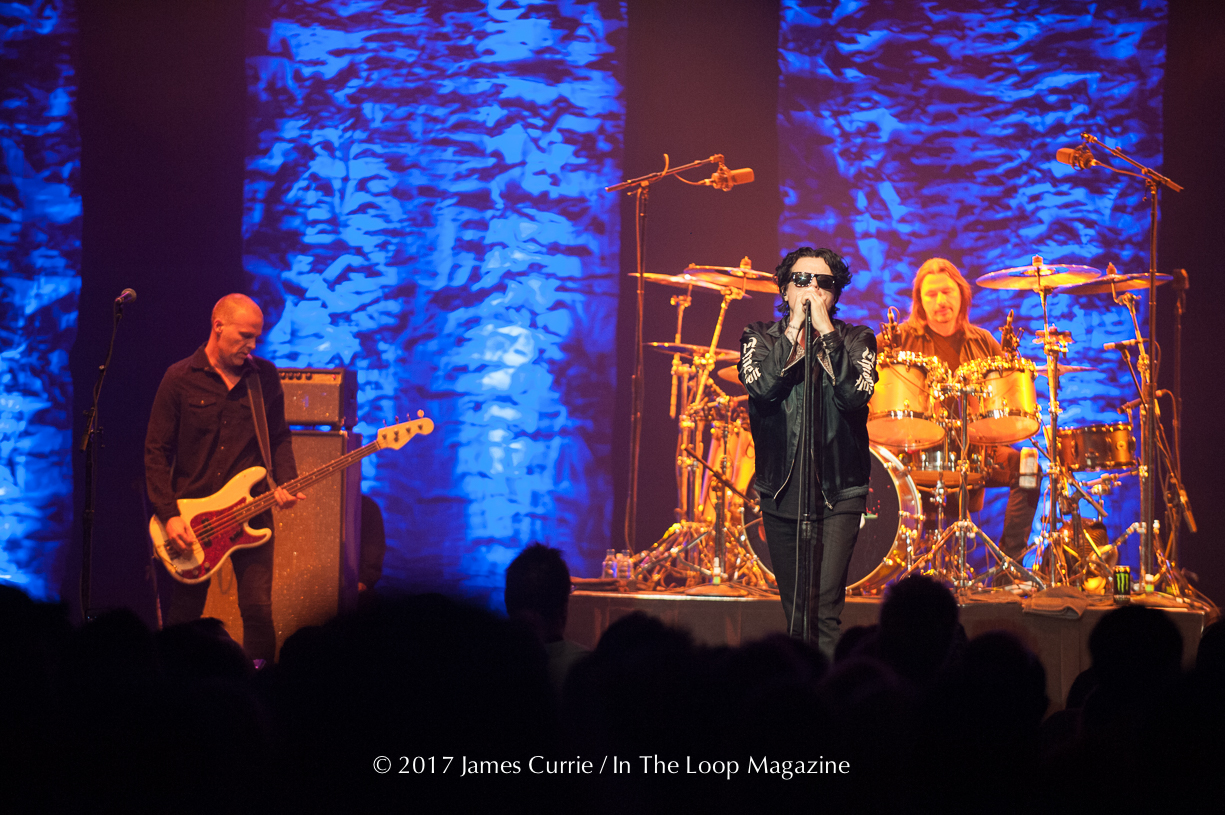 The Cult return to the Chicago area and play just outside of the city at The Venue at the Horseshoe Casino in Hammond Indiana this weekend. They’re back out for a second leg of their 2016 ‘Hidden City’ tour. Along with this tour and live performance, we learn that it’s an impromptu birthday celebration as well for its two founding fathers, Ian Asbury (Friday) and Billy Duffy (Sunday). This Saturday show fits right in between nicely.

The band was in great spirits tonight. Asbury was dancing around like it was 1987. He smiled. He joked with the audience. He even took off his shades for a song! Duffy was his usual cool and casual self, but even he had a smile or two through out. This is typically not the norm for a Cult show. Not that they are reserved, shy and quite types, but usually playing the part of the brooding rock stars that they are. I must admit, this threw me off, but was a welcomed addition. Not sure what brought it on, but they were firing on all cylinders and having a good night.

The show started with the music of The Doors playing in the background. Jim Morrison’s voice could be heard reading some sort of scripture or poetry. Then, the lights grew dark and they launched into “Wildflower”.

After a few songs, Asbury started showing his playful side. He goofed around with the Frank Sinatra classic, “Chicago” adding his own words to it. “Chicago, Chicago, It’s my kind of town. Chicago, Chicago it’s Al Jourgensen’s town.” Asbury sang the little ditty in between songs. He went on to say, “Chicago is a Jazz town. Ray Manzarek is from Chicago. Southside!” Then continued the raucous set.

The band had a dark look about them tonight at the Indiana music hall. Dawned in black seemed to be the look they were going for. Asbury in black t-shirt, black jeans, black leather jacket with writing and characters on it and of course his trademark black wrap around style sunglasses. His hair shorter this time around though thick and full of bounce. Duffy, in what appears to be a black stripped denim long sleeve button down, black Levi’s and his hair slicked back, high and tight. The rest of the band followed suit with the dark tamed down look.

The personnel have changed a little this time around. We’re introduced to a new rhythm guitarist/keyboardist as well as new bass player. Asbury introduced them during the end of the night as Damon Fox and Grant Fitzpatrick. Fox, a multi-instrumentalist most notably from LA’s, Bigelf. Fitzpatrick originally from Australia an around town bassist for several bands. John Tempesta (various Rob Zombie projects) returns back on the drums. He’s been a regular now for a decade and a perfect fit to the band.

They collectively played through fifteen tracks. Some extended remixes like “The Phoenix” were performed as a raucous rendition that included a mini drum solo and of course Billy wailing away one of his signature, twin (black and white) Gretsch guitars. During “Sweet Soul Sister”, the interlude was mixed with a little Doors, “Riders on the Storm” (Yes, lots of The Doors references throughout the night). They ended the official set with a classic they’ve played for over 30 years, “She Sells Sanctuary”. A song they’ve played a million times over, but apparently still have not grown tired of it. Highlight seeing Duffy’s classic swinging arm “Air Jordanesque” guitar pose. Iconic.

By the end, one lucky fan got Asbury’s tambourine, others got Duffy’s guitar picks all while Tempesta and the guys kept the beat.

Did I mention how cool this band is? I mean, these guys are true “Rock Stars”. During the encore, the song started, Asbury looked to stage right. In from the darkness came a flying tambourine. Launched from the back and side over the bassist and right into Asbury’s already stretched out arm and into his hands. Almost as if pulled in by Jedi “Force”. He didn’t miss a beat.

It was around this point that we learned it was Billy and Ian’s birthday. Their tour manager, Chuck, wheeled in a cake and balloons on a cart. The backing band members made it clear neither one wanted to see this, but it had to be done. Earlier in the show, Asbury hearing calls from fans saying, “happy birthday!” Asbury responded with, “No, no, no we’re not gonna do that shit here tonight.” Both embarrassed and maybe a little pissed that it was happening but they took it all in stride and rolled with the fun as they were serenaded a cover of the Beatles, “Happy Birthday”. Asbury saying, “Fuck off. Oh you bastards.” Then throwing his mic down and seemingly walked off stage. He continued, “Wow, I never thought we’d ever have anything with balloons on stage at a Cult show.” Duffy followed with, “This is way to cheerful.” Hugs were shared and then they rolled into one last track.

The show ended after about an hour and a half of in your face rock. The encores were “Peace Dog” and Love Removal Machine”. Asbury thanked the crowd and said, “We’re still making music. Thank you for being here tonight and supporting this band and live rock n roll. We love you and will be back again soon.”

The stage was huge. The backdrop, simple, spaced out hung crinkled material that reflected light like a cliff’s edge. The lighting was amazing. Whoever was running the light show was on it. They hit the right cues, filled the space with the right color pallet and the sound equally as on par. This was a great Cult show at all levels.

I haven’t seen Ian and Billy this active in years. They were playful, energized and engaging. Asbury cracking jokes at Tempesta, kicking his tambourine in the air and catching it and Duffy smiling at front row fans, singling them out and handing out picks. I don’t know what happened, but whatever it was, I hope they keep it up.

For more on The Cult, including more date on this tour, click here

Setlist from The Cult live at The Venue at the Horseshoe Casino, Hammond, IN

Rare Offering To Tour Historic Uptown Theatre Through Alderman's Fund Raiser The Cult @ The Venue at Horseshoe Casino (Hammond, IN)