Continuing His ‘Raise Vibration’ Tour, Lenny Kravitz Not Only Celebrated The Album Release, But 30 Year Career At Ravinia 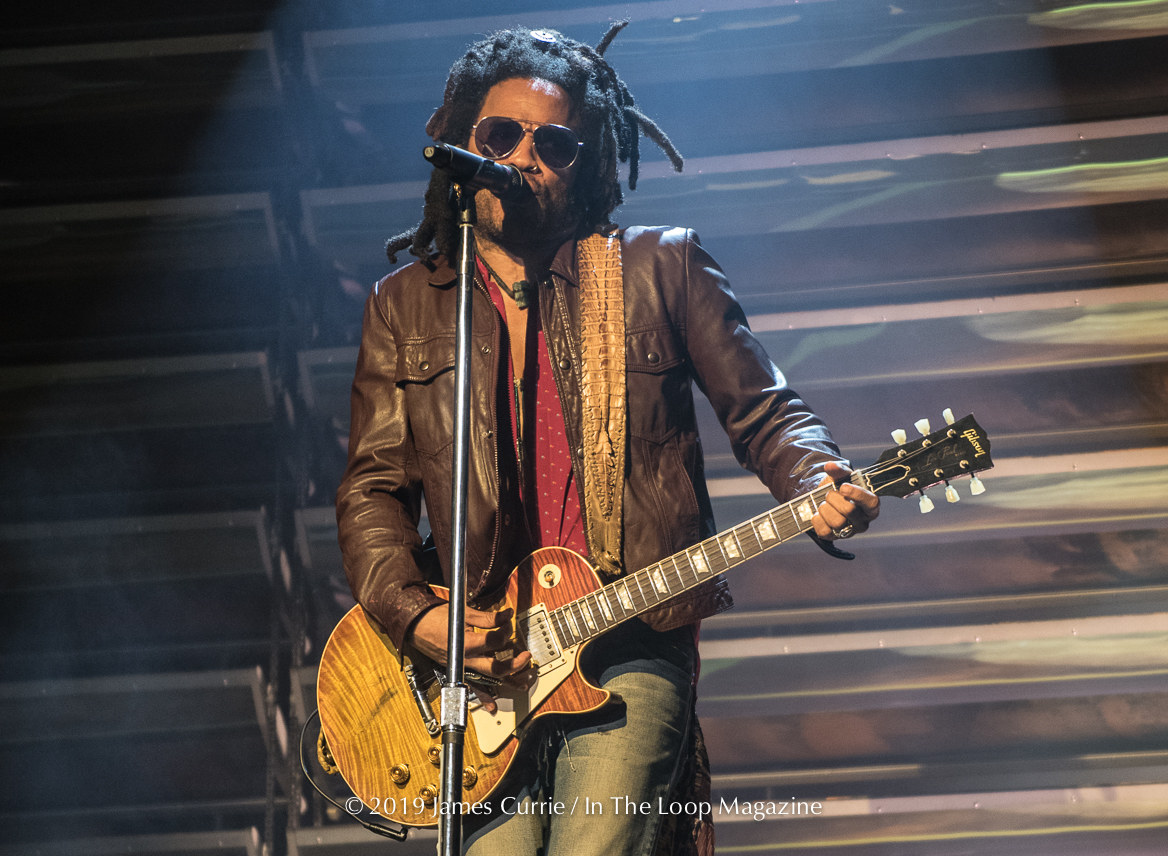 Now in his 30th year as a bonafide rock star, Lenny Kravitz rolled over fans at Chicago’s northside outdoor festival grounds known as Ravinia. Smack dab in the middle of his second leg continuation of the ‘Raise Vibration’ tour, Kravitz and Co. gave one of the most powerful performances seen this summer in Highland Park.

With no opening act, Kravitz kicked off the night under the stars with the opening track of his latest album, ‘Raise Vibration’ from 2018 – “We Can Get It All Together” then quickly ramped things up with fan favorite, “Fly Away” off 1999’s ‘5’ album followed by “Dig In” (2001). He kept pinging back and forth between his 30 year career throughout the night.

Perched high on the back of the stage under two crests, Kravitz stood stoic and directed the performance from his center spot for the first couple songs. He never really stood still for most of the show bouncing back and forth and side to side with even more as the night progressed. His energy was full throttle as he covered some serious ground for almost two and a half hours.

Several highlights took place this night. One of which was a renewed rendition of “American Woman”. This blended into Bob Marley’s “Get Up, Stand Up”. The lights changed to match the mood and filled the pavilion with red, gold and green and mellow vibe to match.

A surprise jam popped up later in the set as Lenny walked off the stage after introducing his band which members include long time guitarist Craig Ross, iconic bass player and “Their Queen” as Kravitz introduced her, Gail Ann Dorsey (David Bowie’s bassist), George Laks on the keys and local boy done good Franklin Vanderbilt on the drums. It seemed like a mini break, but the band played on and kicked into a rolling blues jam before Kravitz strolled back on stage. He smiled and thanked the band. So whatever the reason, it wasn’t planned, but thanks to the bands quick response to otherwise dead air, it worked.

Kravitz spoke to the audience several times throughout the night talking about peace, love and getting along. He also expressed his feelings for the Bahama’s (a major hurricane blew through recently) and asking for everyone to pray and send love to them.

Throughout the night, I couldn’t help but notice how many songs were played off his debut album, ‘Let Love Rule’. I was actually expecting more as this year does mark its 30th anniversary, but nothing was made of this beyond his call from the stage saying, “Here’s one from way back at my beginnings. All the way back to 1989.” Maybe he’s planning another tour in support of the milestone later in the year, but since it’s already September, I doubt it and will just take in what we get.

The night ended with a 15 minute rendition of the classic that started it all for him, “Let Love Rule”. During this extreme edition, we got the main jam, plus solos and a personal visit from Kravitz as he jumped off the stage and ran up the isles to the back of the pavilion where a mini stage was waiting. As he ran by fans, he gave hi-fives, took selfies, gave hugs and rebel-roused the masses before climbing up the platform and continuing the song, beckoning the fans to join in the chant and let love rule. Following this, he ran down the isles making his way to the stage ending the performance in front of the wall of amps, with everyone on their feet waving their hands in the air from side to side.