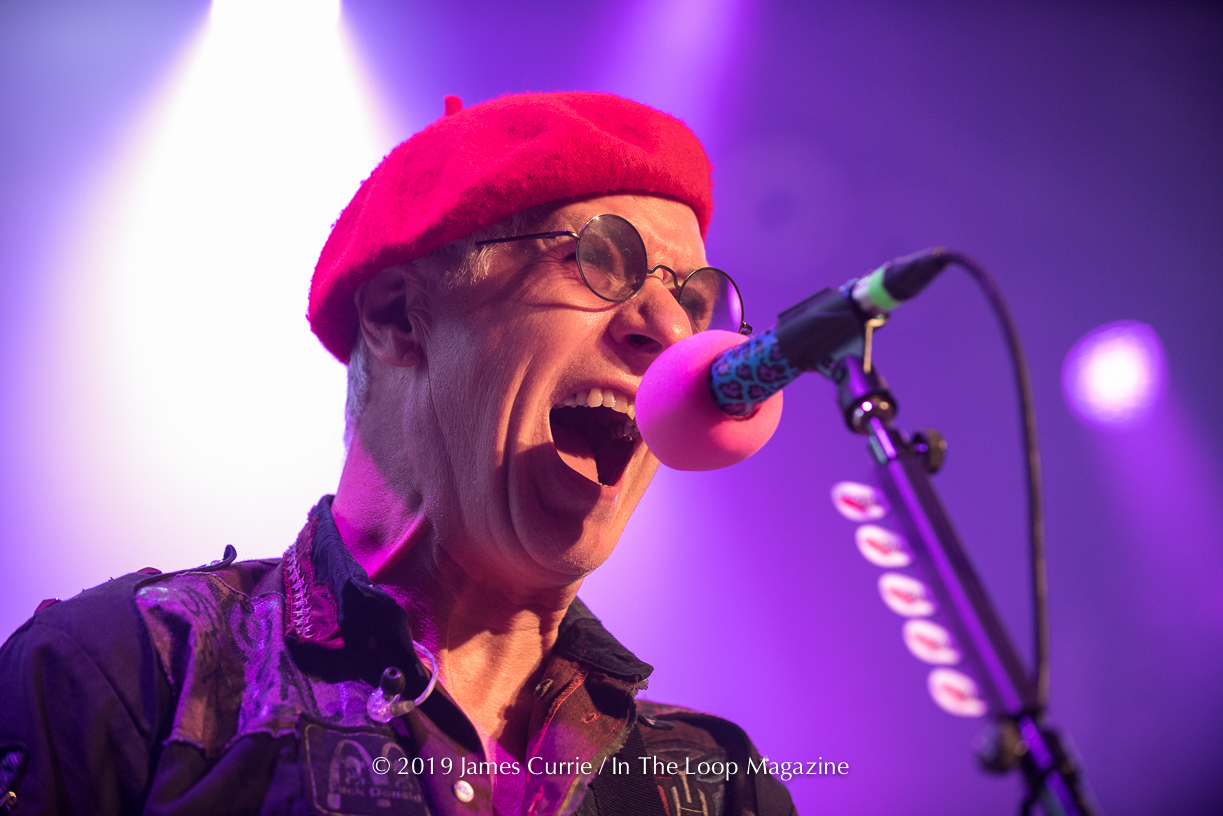 Last night, on the first decent summer night in Chicago, two legendary punk bands X and The Damned played at the House of Blues. It was a strange setting, since the ‘House’ rarely lends itself as a place that welcomes punk sensibilities. In my opinion, a show at the Metro would have been a little more proper, but regardless, I turned up to the place, grabbed a double shot of Jameson to fortify myself for the inevitable mosh pit, and took my post near the stage.

The Detroit Cobras, a five-piece outfit from of course, Detroit, opened the show with their brand of sultry, soul music mixed with garage rock. However good their jams were, their performance was marred by the lead singer’s antics and inability to sing. At the start, she was clearly on something or drunk and fell over during the first song. Could have been a combination of things that caused her fall as she stepped back to the drum riser and took off her high heal shoes with the help of her bandmate. She could not hit the vocal demands of their repertoire. Her voice often cut in and out with little flourishes, hinting at a powerful and intense tone that never fully materialized. But while she ‘fell short’, the rest of the Cobras held their own. The riffs from the rhythm guitar marched in lockstep with the frantic drums through the set while the bassist did his best to corral the singer’s antics. Furthermore, the lead guitar kept his distance from the cringe and hung around stage right, chiming in with some crackling guitar solos every now and then.

In between songs, the singer tried her best to get the crowd pumped for X and The Damned, croaking out the bands’ names and making some kind of thinly-veiled insult to the crowd or Chicago that I missed. All in all, though, I was surprised by how restrained the crowd acted towards the clumsiness of the set and to the singer’s incompetence. I was half expecting the Cobras to get booed off the stage, but apparently the crowd’s patience won and was rewarded by the band’s last song which was a Bo Diddley stomp that again would have been livelier had it not been for the singer but was salvaged, barely, by a fiery drum sendoff. All in all, it looked like the band was having a bad day, but thankfully once they left the stage the worst was over.

While waiting for the legendary band, “X” to take the stage, I took a moment to look around at the people in the crowd. A vast majority was composed of mature faces wearing Damned shirts and black. But since it was week night at the House of Blues in River North, there were also a lot of basic well-heeled types dressed in Vineyard Vines and button-down shirts, garb wholly unsuitable for the occasion, who seemed unaccustomed to how punk shows work and probably just showed up because something was going on. One such couple looked uncomfortable standing amid a section of the crowd decked out in black leather and other such gear. One of them, a lady, turned to a nearby rocker, asking, “Is X playing next?”, despite the great big “X” draped in front of the banner for The Damned, a clear sign that indeed they were and that yes, you are clearly unprepared for the show. Aside from all that, there were enough people my age (late 20’s) to not make me feel isolated and out-aged. All in all, it was a pretty decent mix of people in the crowd.

Up until X appeared, I had no idea who they were. Until that point, I believed I knew about a good number of punk acts both classic and modern. However, X proved that there was a great big blind spot on my punk radar for when they appeared everyone around me erupted with excitement. The old guys in the crowd burst into tears when they saw a cherubic old guy in a red polo gingerly seat himself on a stool with his guitar. They wailed when they saw a tall lanky bassist with slicked-back hair stride onto the stage. They cried when a small, modestly disheveled lady with a black jacket emblazoned with a big “X” on the back shyly made her way to the microphone.

Before I could say, “What?”, the band sent it right out of the gate. X opened with the song, which, I later learned was “Beyond and Back” from their second album Wild Gift. Fusing straight rockabilly and punk, the band went full throttle. The bassist, John Doe, danced across the stage with his bass hammering forth each note. In the meantime, the guitarist, Billy Zoom, nonchalantly churned out riff after riff and searing solos while seated on a stool, smiling pleasantly at the crowd like a grandfather pleased with his grandkids. Exene Cervenka sashayed gently to the roaring punk melody swirling around her. Seeing the band as elder as they, made me question why I was here. Yes, the music was great, but was this music for me? Looking at the band, it seemed as if they were approaching their final ascent into geezer-dom and knowing that, muted my reception because I suddenly felt old as hell at that moment.

But then a strange thing happened. I looked around at everyone in the crowd, at the old guys who were still in tears as Doe and Cervenka, traded lyrical duties while the music roared. When I saw several of them screaming the lyrics to “In this House that I Call Home”, I decided to drink the Kool-Aid and get on board with the set. Miraculously, the already great set became phenomenal. The swirling tide of “Nausea” with its labyrinthine melody and Zoom’s marching riffs easily was my favorite part of the set. But then again, there was also the relentless rush of “The Hungry Wolf” in which the band just hurtled headlong through some explosive Bo Diddley beat that was just unreal. In addition, there was one stretch of the set in which Zoom played the saxophone while the drummer went on the xylophone. When I saw the xylophone-saxophone, the Curtis Cartwright* in me went, “Mom! Did they bring a xylophone to a punk show?” as they soon segued into an extended combination jam. Who knew that a saxophone and a xylophone could work so well together?

But their set was amazing, X was amazing. What made them perhaps the best band I’ve seen was how tremendously confident and fiery they were onstage. Comparing them to some younger bands who just stand there onstage, static, and play without any emotion or to even compare them to another similarly aged band’ sets like Bauhaus’ recent show, when Peter Murphy complained that he and the band were tired in the midst of their set, X was simply a cut above them all. They came to rock and by the spirit of Harambe the Gorilla, they absolutely bloody did. They exemplified that yeoman punk spirit, eschewing technique and craft in favor of energy and confidence, attaining perfection at the end of it all. At the end of their set, I patted myself on the back for discovering what has now become my new favorite ‘old’ punk band.

Keep in mind, The Damned had yet to take the stage. When they did, the theme song from the old “Avengers” TV show started to play and the lights dimmed. Out came Monty Oxy Moron on the keys, the drummer Pinch on drums, the recently reunited bassist Paul Gray with the gnarliest Rickenbacker bass I’ve ever seen, a beaming Captain Sensible with his red beret and fatigues, and finally, the closest thing to a living vampire besides Keanu Reeves, Dave Vanian. Vanian strode onto the stage in a three-piece suit wearing black gloves, slicked back hair, and wearing a pair of sunglasses. Immediately, they launched into “Love Song” off of Machine Gun Etiquette, possibly one of the greatest punk ballads of all time. Sensible’s roaring guitar lit the tune up while Vanian’s sonorous voice made that song soar.

Moreover, the band was just electric. Vanian zipped across the stage while Sensible looked like he was having the time of his life ripping away at his guitar with a big creepy grin on his face. In the meantime, Oxy Moron was at his keyboards acting as a mad scientist-hypeman gesticulating wildly at the crowd in his fisheye glasses. In the meantime, Gray too wielded that ‘Ric’ bass like it was the sword Excalibur. At every chance he strode to the front of the stage brandishing the thing as it boomed out some of the clearest bass notes I ever heard live. If Sensible’s guitar was lighting, that bass was the thunder. Despite the breakneck speed of each song, each note boomed like a relentless tide that was only broken up when Vanian would poke fun at himself at the rest of the band members in between songs. Seriously, their exchanges were some of the most hilarious banter I’ve ever heard. They made fun of the pope, Trump, and even the drummer was throwing some light-hearted jabs at Vanian, asking him if he took his pills at one point. Honestly, it was great seeing a band have so much fun onstage.

Throughout the set, The Damned went for it. They were unrelenting, flowing into one banger after another. But the highlight for everyone was at the close of their set, when they played “Neat Neat Neat”. The mosh pit went wild. I got jostled, pushed, and shoved, but it was all worth it to do it all to that iconic song. Hearing the staccato “NEAT!NEAT!NEAT!” live was a dream come true. What made the band especially great, was how theatrical and lively they were onstage. Much has been written about how spectacular their live shows are, and all of it is true. Just when everyone thought that the band would be gassed out of their minds, The Damned kept going. In fact, they appeared for two encores! The second of which was crashed by the singer from the Detroit Cobras. Right before Vanian began singing, she pushed her way into the pit and shoved aside the security guard as she tried to get Vanian’s attention. Luckily, he played it off with class while the singer was shoved out of the pit. Then The Damned began to play the greatest cover of “White Rabbit” by Jefferson Airplane I’ve ever heard. Sensible’s searing guitar mixed with Vanian’s deep serpentine growl made this version one for the ages.

It was a masterful finish to a night of the underdogs. Two bands, X and The Damned, underrated in their time but revered now as the colossi of punk they always were. Seeing both those bands play and that age has not dulled their luster is a gift that nobody should pass up. Also, if heaven is something, then let it just be a live set by The Damned that lasts for all eternity.

For more on The Damned, including the current tour, click here

For photos of The Damned from the show at House of Blues, click here

For photos of X from the show at House of Blues, click here

For photos of The Detroit Cobras from the show at House of Blues, click

For special edition photos (40 of 40) from the 40th anniversary at House of Blues, click here