Concert Review: The UK’s, The Horrors, Bring Their Dark Danceable Show To The US With Massive Showing At Bottom Lounge 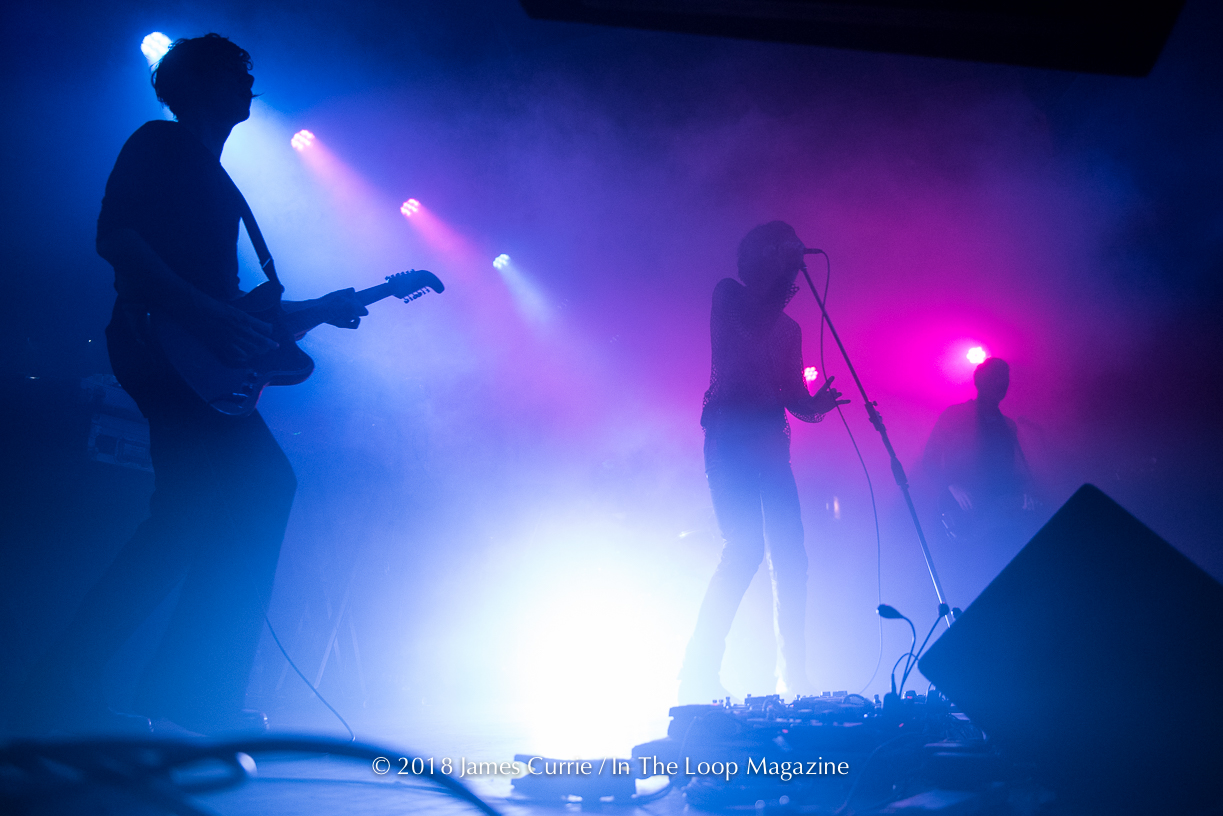 When I was in college, I counted myself lucky to be surrounded by friends who all had great musical taste. My roommate, for instance, brought me up to speed on the Rolling Stones and the Animals, while another friend turned me onto the greatness of Big Star and T-Rex. On my own time however, I started listening to more indie music and was soon led to the music of the British label, XL Recordings. There, I discovered artists such as Jack Penate, the Golden Silvers, the xx, and the Avalanches. But amidst the rush of heady britpop, synthwave, and plunderphonics lurked one band known as The Horrors. Led by the “grim-visaged” singer, Faris Badwan, the band started out as a noise band whose dark-wave melodies, ominous guitar riffs, and languid, operatic vocals was unlike anything I had ever heard at that point. Around this time their second album Primary Colours was released, and on it was their song, “Who Can Say”, a post-punk epic of torrential guitar riffs, a catchy melody laid on top, and of course, Badwan’s slow, deliberate and distant singing.

With my musical tastes and career in flux in the years after I graduated, I would often find myself returning to the old XL stable of artists, only to find that much of them had not come out with any new music or had since disbanded. The Golden Silvers were gone as was Jack Penate, but yet The Horrors still occupied the same place, this time with a decidedly more shoegaze and electropop sound unlike the dark, gothic melodies on Primary Colours. “Had they’ve finally sold out?” I thought when I heard “Still Life” off of their album Skying. They carried themselves well since its slow marching crescendo and lush instrumentation, hearkening back to the glory days of Oasis, Embrace, and the Verve and even that “Wall-of-Sound” style, made the song undeniably brilliant and helped earn them the best album (Skying) of the year award from NME in 2012. Furthermore, I kept playing the song over and over again, to help keep me sane through the burdens of job hunting. The hopeful tone and expansiveness of the tune pushed me through numerous rejections and innumerable resumes I sent out. The Horrors, it would seem, were a band that would reappear at propitious moments in my life.

But now, after having been here in Chicago for the past few years and finding myself in the midst of a greater surge in britpop, shoegaze, and post-punk, it seemed fitting that The Horrors would reappear in my life. Not in my Zune or on YouTube, but finally in person at the Bottom Lounge located in the West Loop hinterland last night where they were playing one show out of many in a massive US/Canada tour.

This was my first time at the Bottom Lounge. When I arrived, I was struck by the size of the place. Up to that point, I had believed the Lounge was a tiny hole-in-the-wall, tucked away under the L tracks and meant for only the most discriminating music fans in Chicago. Instead, the “Lounge” was housed in a large building, with high ceilings and a vast open space comprising a well-stocked bar and a sizable stage as well. Furthermore, there were a good number of people inside, but even as big as the place was, it felt strangely intimate and peaceful. Nobody was shouting or acting up, the staff moved around at a relaxed pace and even when I went to check-in I found they were rather welcoming, professional and efficient. After the staff pointed the way to the stage, I went straight to the bar, grabbed a Hoegaarden, and parked myself at the front.

The band that opened the night was a four-piece Chicago band called Bleach Party. Having never heard of them and knowing full well that nobody in the audience had heard of them either, the lead singer with her hair done up like a sixties housewife and wearing extra large nerdy glasses, leaned into the microphone, looked over to the rest of the band and said, “Let’s just do this.” Thereafter followed some of the best music I have ever heard from an opening band in a long time. The singer ripped and roared through an intense psychobilly set. The drums boomed and throttled the stage, while the singer’s guitar burned at a frantic pace. The breathlessness of their set quickly endeared themselves to everybody in the audience. When the band took a break in between songs, they joked with the house, talking about how this show was their biggest one to date and largest stage. As their set continued, I have to further comment on Bleach House’s brilliant drummer, for she held the entire thing together (even when her kick drum pedal broken mid song). Through each song, the drums rumbled with such fury that it threatened to bring the entire venue down. Even their “slow” songs proved to be wonderful exercises of furious psychobilly, surf-rock splendor. At the end of their set, Bleach Party won everybody over to their sound and while they called this their “biggest” show, the real hope is that their real biggest show is yet come.

After I processed Bleach Party’s set with a few people standing nearby, The Horrors emerged onstage. As expected, everyone, including myself, lost their shit when Faris Badwan strode onstage dressed in a black leather jacket and a see-through net shirt. The set opened with “Hologram” off of their latest album “V”, a fuzz-laden electro-groove that had everyone hooked. As the music boomed in all its electro-glory, the strobe lights flashed and smoked rolled in, I squinted at the stage, seeing Faris Badwan strolling across it and contorting his body at various moments as if the spirits of britpop fought for control of his body at every crash of the drums. In fact, I was quite surprised to see him so animated after listening to his cool, languid singing. Regardless of the contrast though, the second song “Machine” proved to be another punchy electropop tune. “I’ve listened to this song a thousand times!” The woman next to me exclaimed. But while I couldn’t disagree with her, since the song sounded great, I was holding out for the diamonds, “Who Can Say” and “Still Life”. As if someone heard me, the next song after was “Who Can Say”, at which point I exclaimed, “This is my song!” – like a jackass. Hearing the song live and seeing The Horrors play it onstage, felt like vindication for my young college-self, however the song suffered a little from the absence of the catchy melody. But in spite of the trifle, the guitar roared and Badwan’s voice laid down the coldhearted existential sorrow just like I remembered. After a number of phenomenal songs, such as the Kraftwerk-esque “Sea Within a Sea” and the funky dance number, ”Press Enter to Exit”, the set closed with their magnum opus “Still Life”. Even with the absence of the horns, hearing the song live was absolutely staggering for there is no band that can carry these burgeoning, crescendo-ed melodies quite like the Horrors. The combination of the band’s sound and Badwan’s serpentine voice that just coils itself around the melody brought the song to a charged finish and to the end of their set. For their encore, they finished with “Ghost” and “Something to Remember Me By”, the latter being a strangely upbeat dance number that sounded out of place compared to the rest of the set.

On the whole, The Horrors, along with Bleach Party, put on one of the best performances of the year I have seen so far and even more so considering how long I have been a supporter. The entire set was brilliant, with much of the songs culled from their entire discography such as Primary Colours and Skying to their recent one V. My only gripe with the band is perhaps the direction the band has since taken. There were moments when I felt that these poppy dance tracks sounded strange compared to their older work, in which they borrowed their elements from Kraftwerk, Joy Division, and other older bands which, in my opinion, made them an absolute revelation when I first discovered them. Also, the strobes were a bit much. I get the effect and mood they were setting and going for, but it was a bit much for the eyes. Anyone with seizure issues be forewarned. Furthermore, I would have loved to hear, “I Only Think of You” from Primary Colours with its slow, hypnotic rhythm and mournful crooning. I appreciate bands growing and finding themselves. It’s a must. Maybe now they have come into their own skin. Regardless of my gripes, the band turned in a brilliant performance that satisfied myself and the entire audience last night. After ten years of listening the their music, The Horrors are still a resolute force within this moment when shoegaze, post-punk, and electropop are making a sweeping comeback. The Horrors have thrived for almost a decade and last night’s show at the Bottom Lounge showed everyone that, like a rock in a raging sea, they still remain to thrill us all.

For more on The Horrors including current tour and latest releases, click here

For photos from the show at Bottom Lounge, click here

Setlist: The Horrors live in Chicago at Bottom Lounge 06-21-18

One thought on “Concert Review: The UK’s, The Horrors, Bring Their Dark Danceable Show To The US With Massive Showing At Bottom Lounge”