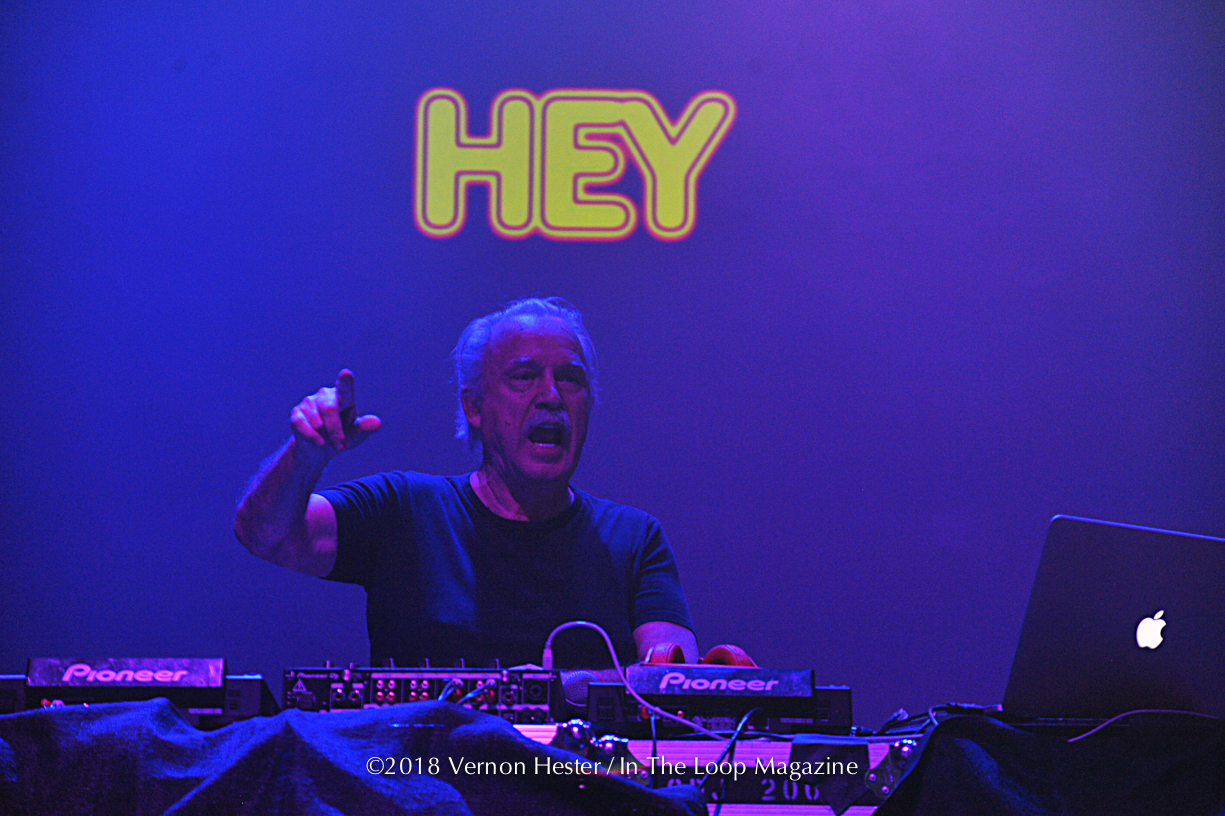 The idea of watching a DJ spin records for an audience who deifies him/her as a god rubs my chabsbury in the rudest possible way. The North Coast Festival, the Perry Farrell Stage at Lollapalooza, Spring Awakening or any number of arena sized events where a musical instrument is not played or a living voice  goes un-heard feels like a betrayal of the concept of “live entertainment.” Yeah, sure, the DJ is showing his skill at mixing, picking, sampling, and manipulating the crowd but basically your paying to watch someone spin his record collection.

I watched my stone faced denial of said events crumble when my editor James Currie asked me would I cover this show since he would be out of the country. Had it been anyone else except Giorgio Moroder I would have said no… but this promised to be a night to remember. As the inventor of Italio-Disco, a major player in the creation and spread of Euro-Disco, a key architect in the creation of EDM, as an influential Academy Award winning film composer, a four time Grammy winner, the Svengali behind icon Donna Summer,  and a slew of other accomplishments, it was clear that if I allowed my snobbishness to prevent me from going, I would regret it for the rest of my life. And no, it certainly did not hurt that Little Boots was on the bill.

On the way to the venue I let my mind wander on the past. As a gay black rocker, looking back on Moroder put me in an interesting and unique place. While back in the day rock fans tired and hated disco with a passion [that Comisky Park debacle in the summer of 1979, the– some would say racist and homophobic– rejection of black music on rock radio and the hypocritical embrace of white rockers who scored massive hits with a disco beat–among them The Rolling Stones, Queen, Rod Stewart, and KISS] and criticized it’s adherence to the all important beat [something funk did not do], its seeming monotony, and a wealth of artists who were largely anonymous, there were just as many pleasures to be enjoyed.

One thing that always impressed me about Moroder was that he could apply his style to rock as well as disco to brilliant effect. David Bowie’s original version of “Cat People (Putting Out Fire)” was an arresting and moody track that presented the constantly morphing singer in a sinister and overtly sexual light, which was new for him at the time (1982). His handling of Bonnie Tyler on the rocker “Here She Comes” from the forgotten Metropolis soundtrack clearly outdid Kim Carnes’s “Bette Davis Eyes” as the ultimate tribute to beady eyed bitch beauties everywhere (drag queens in twenty seven states would kill for that track). I also remember hearing “Call Me” by Blondie blasting all over the radio in the summer of 1980 and it felt like nirvana; Moroder and Debby Harry had managed to take the business end of disco and fuse it with hard new wave and punk, creating a song that the gays, blacks, punks, rockers, and new wavers could all dance together to (and they did with a vengeance…the song stayed at number one on the Billboard Hot 100 chart for six weeks). And  though I was not her biggest fan, I found that Moroder’s collaborations with Donna Summer were hardly just product; when they weren’t creating concept albums (Once Upon A Time [1977] used Cinderella as a starting point, Bad Girls [1978] alluded to “ladies of the night” without coming out and saying it, and The Four Seasons of Love[1976]  offered an extended song for each season) they were adapting pretentious oldies like “MacArthur Park Suite” into swirling epics so lush and glamorous you needed an aqua lung to get through them. Where Noel Harrison’s original (and William Shatner’s cover) were dead on arrival, Summer and Moroder’s version seduced listeners to shake there asses and give in to the fantasy.

Looking back on the late seventies where me and my cousins would  funk out at The Warehouse on a Saturday night, I had to admit that I had forgotten how much fun the music and  times were. This was before radio demographics, the internet, AIDS, the two Bush’s, a couple of recessions, corporate take overs, school shootings, seasonal terrorist attacks, mass deportations, and God knows what else ruined the party. Being young used to be a lot of fun, and with dance music, and particularly disco, it was an avenue of discovery and glamour.

All of that nostalgia was clearly on Little Boots’ mind as well, as she came out in a white sparkly loose fitting pants suit and looked like one of those “hip birds” from a British youth exploitation movie from the 1960’s (think of Judy Geeson and you get the picture). For her set she went for a selection of pungent oldies (The Jackson 5’s “Dancing Machine,” a muscular re-mix of Sylvester’s classic “Do You Wanna Funk?,” “Let the Music Play” by Shannon) before closing with a transcendent “You Make Me Feel Mighty Real”  (Sylvester again) and her own “New In Town” which had the already sweaty audience exhausted. Then the Master took the stage and to say the least, what happened next was nowhere near what I expected.

Looking grand and magisterial, the white haired Moroder (who’s now somehow 78 years old) came out and spent the night spinning his hits while projections flashed on the screen behind him (exactly why I don’t go for DJ shows to begin with). But rather than calling it a “juke box concert” this mash up did something far more and unexpected…it drew me in, engaged me, and tickled me to no end.

For ninety plus minutes the hits (and the pleasures) just kept coming. There was a decisively un-wrinkled Tom Cruise strutting around in a pair of nut crunching Levi’s in the movie Top Gun during an accelerated re-mix of Berlin’s “Take My Breath Away ( the only mis-step of the night),” an unexpected segment from the re-mixed version of Suzanne Vega’s “Tom’s Diner,” Kylie Minoque showing some physical dexterity during a clip from “Right Here, Right Now,” and lots and lots of Donna Summer (clips from the old Midnight Special tv show of her singing “I Feel Love,” a clip from who knows where of her in space age bondage wear for “Bad Girls,” quant and cheesy 70s animated graphics for “Hot Stuff,” a lush and dreamy clip of her tumbling through “MacArthur Park Suite,” and that ancient  Francesco Scavullo portrait of her and Barbra Streisand  as they chanted “Enough Is Enough” on the soundtrack).

Those I could expect and anticipate, but the added joy was seeing and hearing long forgotten hits like the equally long forgotten Limahl singing “The Neverending Story,” Amy Holland giving her all on “She’s On Fire,” and the rather fey sounding Phil Oakley sounding like an escapee from E.L.O. while crooning how we will always be “Together in Electric Dreams.” And yet the visuals had a way of, in some cases overpowering the songs. The clip of Brad Davis sweating profusely just before getting busted in Morocco for possession in Alan Parker’s film Midnight Express to the accompaniment of “The Chase” was hair raising while a couple of others had an altogether different effect. The clip of a coked up Al Pacino from Brian DePalma’s Scarface (“I want you to meet my little friend…”) set to Paul Engemann’s  “Push it to the Limit” was greeted with howls of laughter by the SRO house, while that preposterous balletic leap at the finale of “Flashdance” almost got the same reaction.

For the finish Moroder chose the only song that could close out his extravaganza…a remixed, re-editied version of “Call Me” with images of an almost surreal Richard Gere looking astonishingly beautiful swathed in eye popping (for the time) luxury. It was a fitting close since Moroder spent the entire evening behind his console, waving his fingers about toward the crowd like some enchanted Italian wizard from Oz. It was pretty clear that he loved connecting with a live audience of dancing, yelling, and singing strangers as much as they loved connecting with him

For photos of Giorgio Moroder live in Chicago at Thalia Hall, click here

For photos of Little Boots live in Chicago at Thalia Hall, click here