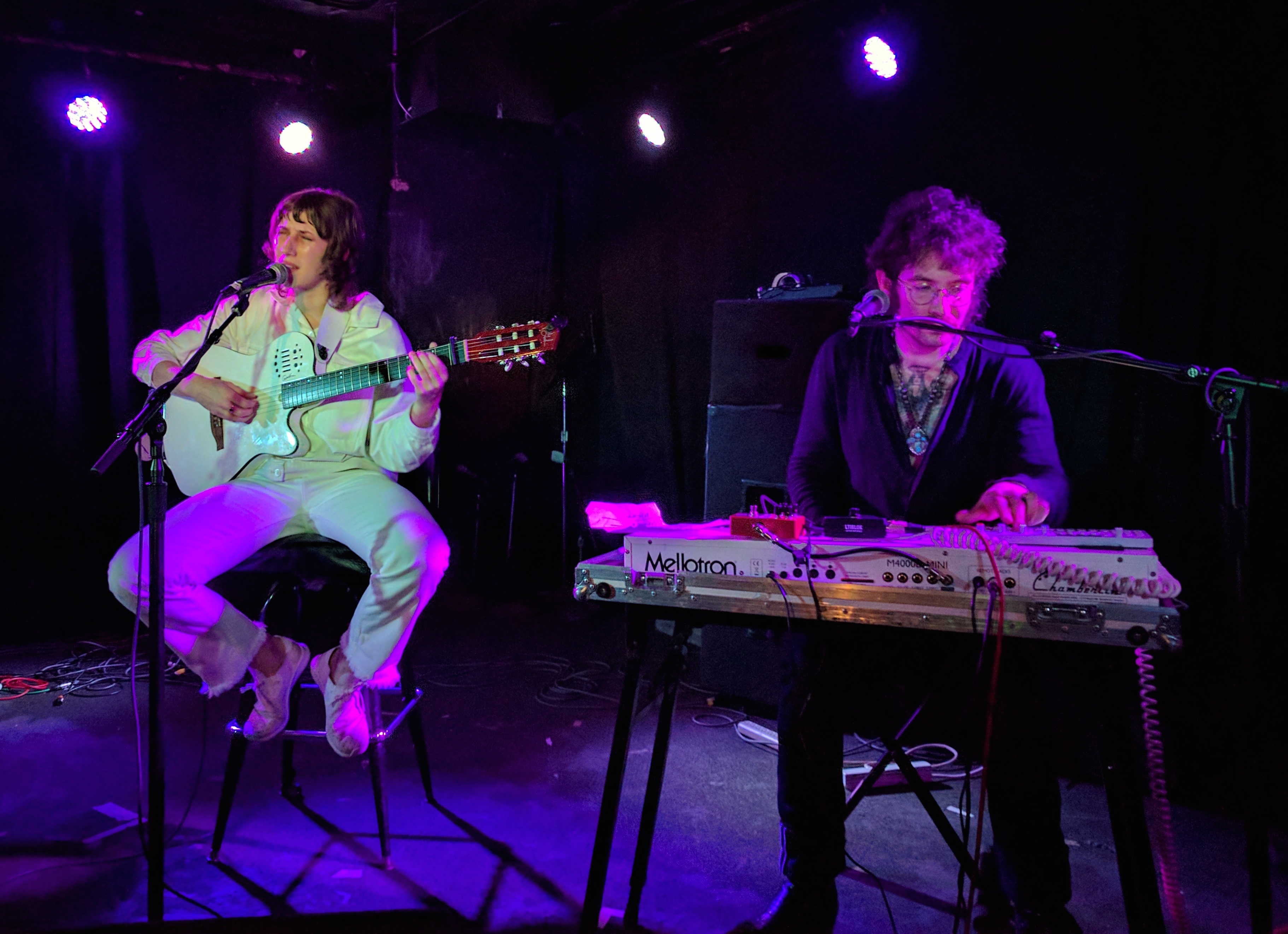 It is tough to describe the music and personality of the rising New Zealand artist, Aldous Harding for haunting, theatrical, and dark all congeal into her startling sound. After releasing two albums, the first eponymously titled Aldous Harding in 2014 and the second, 2017’s Party, Harding’s music has garnered tremendous praise on both sides of the Atlantic, from the Guardian, NPR, and even the New York Times. However, having never heard her music until yesterday, and only a few songs beforehand, I knew I would be taking a tremendous risk by going down to the Empty Bottle for her show, worrying about perhaps being disappointed or amazed. Once she took the stage, joined by the artist Michael Albert and the local band Our Fathers, I was surprised in fact, to feel the latter.

The show began with performances from the band Our Fathers and Michael Albert. The five-piece, Our Fathers opened the show with their funk-laden sound and catchy pop hooks. The music throughout their set proved to be exceptionally good, with some songs being downright funky in that particular Japanese, city-pop mold with a chugging bass and rollicking drumbeat. While the band played extremely well, I believe the vocals brought down the band’s strength. For one thing, the band overpowered the vocals and when heard during some lulls in their playing, the singer’s voice sounded weak and unable to keep up with the band’s power. In fact, I thought the band could have functioned rather well without a singer. Nevertheless, Our Fathers opened the show well and primed the entire crowd for Aldous Harding.

The next artist, Michael Albert from the band Thin Hymns, dispensed with the stage by opting to sit down with his keyboards on the floor in front. While hampered by a noisy crowd at the bar, his quiet, somber melodies held firm and soon gave way to a clutch of pleasant chamber-pop tunes that soon captivated much of the crowd. In one instance, a large man shouldered his way to the front and started dancing to everyone’s amusement, including Albert’s own. Believing it to be a sign of how good Albert’s music was, unfortunately it turned out that the guy was simply drunk off his head. Despite all that, the moment proved to be one highlight from what soon became a memorable night.

When Aldous Harding walked onstage dressed all in white, everyone fell silent. She pulled a stool next to her, sat down, and began to play “Swell Does the Skull” from her new album Party. As she strummed her guitar, her voice assumed the tone of an old woman and her poise was entirely grotesque. Harding’s face contorted in a sneer, her eyes turned up in their sockets, and her jaw jutted out as if she was a woman possessed by some mad spirit condemning her to a life of indie-rock greatness. Her sparse, economical, and devastating sound, punctuated by wonderful moments of silence during which she fixed her wild, lacerating gaze at random faces in the crowd, fed the raw power of her lyrics. At first, I was not entirely taken by her performance. I found her presence to be unique, but not truly awesome and was almost ready to leave the show. However it was not until she had finished the song “Party”, the main song from her new album in which she sang in a wonderfully disturbing girly voice, when one older woman in the crowd had an emotional breakdown. She began sobbing uncontrollably, and when noticing the scene she caused, loudly exclaimed, “She’s incredible! She’s just incredible!”

“I sure hope so.” Harding replied.

It was around then when I noticed also, that many of the women standing around me were in tears while some of the men looked disturbed but intrigued. Seeing all this drama unfold, I resolved to stay.

A brilliant decision, for as the tears began to roll and the songs in her set began unsettling my own emotions, Harding’s show soon transformed into a work of art. Every unhinged glance, the shift between singing like an old woman and a young girl, and her slow, laconic movements generated an experience that took everyone’s breath away. “Horizon”, a quietly powerful epic and the best song from her set, brought all these sensibilities to bear on a melody consisting only of slow, single piano chords and her ethereal voice singing, “Here is your princess and here is your horizon.” The song reminded me of something Mark Hollis would sing, or better yet Julian Cope’s song “The Great Dominions”, a song in which the lyrics drew the main focus with only a minimal amount of backing from the instruments. From her set, other songs such as “What if Birds Aren’t Singing? They’re Screaming”, the unreleased song, “Pilot”, and a wonderful cover of Paul McCartney’s “Single Pigeon” captured her at her unique best. Furthermore, Harding broke character between songs, joking with the audience and exulting in the intimate space the Empty Bottle afforded. When her set finished, everyone in the audience was visibly shaken, including me as I struggled to come to grips with her show. But regardless of what I thought, her show was singularly memorable, unlike any I have ever encountered.

At the end of the day, it is tough to recommend her music to everyone, for Harding’s songs are meant for people who are going through troubling moments in their lives or are comfortable with feeling uncomfortable. Aldous Harding’s appeal, possibly comes from how she manages to give a voice to the desolation of the spirit and madness to make sense of it all. To not hide behind a mask of normality and convention, but to meet the brutality of one’s experience head-on in all its horror. Furthermore, Aldous Harding is a singer meant to be experienced. Watching her performances online or only listening to her music misses the sheer visceral power her live performance can trigger. Her theatricality can alienate many, but thankfully it is a sensibility tempered by the strength of her lyrics that are sparse but elegant, and lit from within.