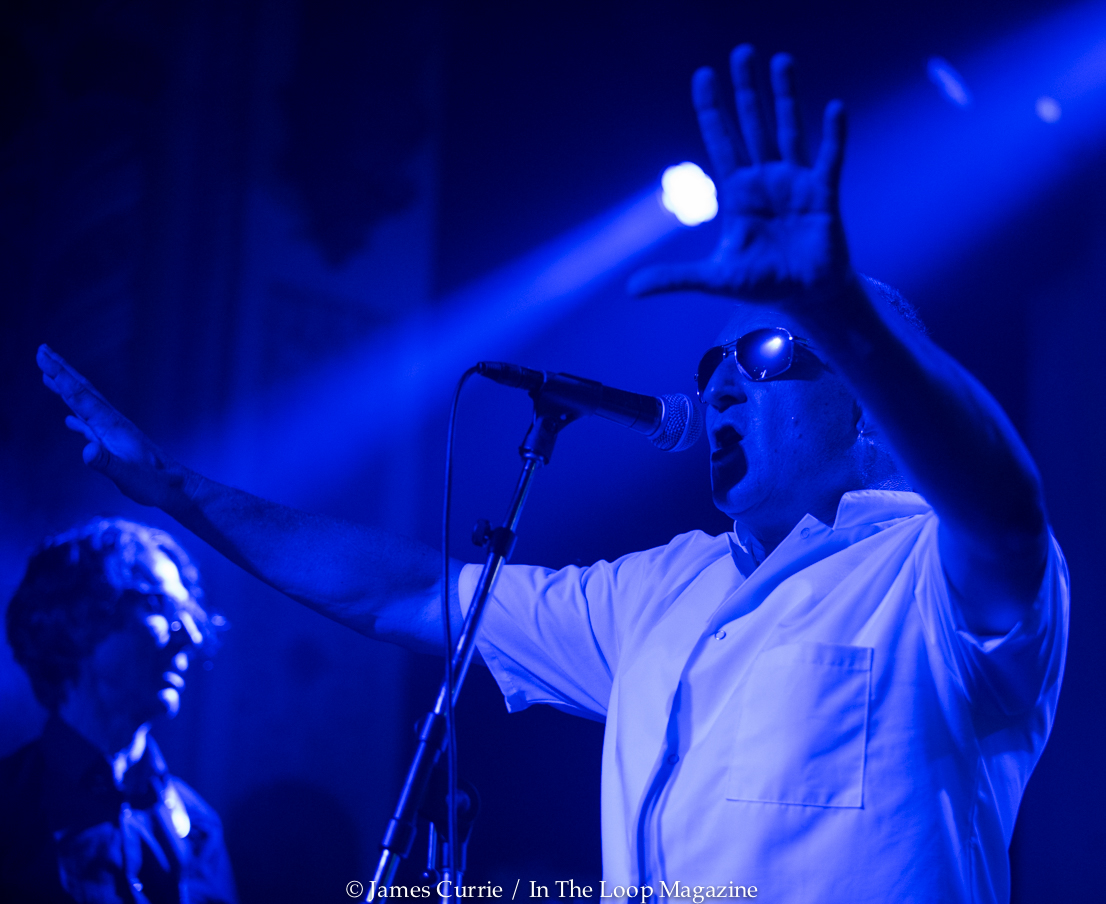 As September comes to a close each year leather clad music fans, ranging 30 to 40 years in age, flock to Metro in Chicago for the annual Cold Waves Festival. The eternal flame of this festival is the spirit of one of the kindest souls in the Chicago music scene and, nationally, the underground industrial music scene: Jami Duffy. The organizers, Jason & Kelly Novak, have fine-tuned this 2 day celebration to run lean and smooth and Jamie’s legacy remains in the building in conversations, reflections, on the side stage banners and of course with the ever present love of Pat ‘Mama Kidd’ Duffy; Jamie’s endearing mother.

Fittingly Jamie was celebrated with ‘Mama Kidd’ was on stage right before the most anticipated reunion in the industrial world: ‘The Cocks’ – a celebration of the glory era of ‘The Revolting Cocks’. Paul Barker, Richard 23, Luc Van Acker, Chris Connelly, supplemented by an Acucrack foundation of Dan Brill and Jason Novak, took the stage to rip through a 30 year anniversary homage to ‘Big Sexyland’ – the debut record from 1986.

Bounding on the stage with the energy of an adolescent, Luc Van Acker revved up the crowd with his bigger than life stage persona – this man needs to be fronting a band and touring often – stage presence is in his blood. Richard 23 followed his cohort in matching white garb and then the fun began: a recreation of ‘Big Sexyland’ that had its born city singing, or should I say chanting, along to these seminal industrial anthems. Paul Barker, cracking numerous smiles, laid the foundation with his precision playing in the bass forward mix. R23 & Van Acker belted out each tune like time had stood still and, short of livestock on stage, it could have been 1986.

As if getting to hear ‘Big Sexyland’ wasn’t enough… wait .. here comes a just as energetic Chris Connelly to lend a hand with the ‘hits’ of the next 2 albums: “Beers, Steers and Queers” and “Linger Ficken’ Good”. Powering through such dancefloor mainstays as “Stainless Steel Providers” Connelly matched the energy in the room, stalking the stage in his homeland kilt and Cher T-Shirt (funny, ironic – who cares!) We’re getting to hear “Crackin’ Up”, “Da Ya Think I’m Sexy” and “Something Wonderfvll”!

Richard 23 returned to the stage for the rousing encore of “Da Ya Think I’m Sexy” that had everyone on stage smiling and laughing – the band ended with appropriate bow to the crowd: ass to the crowd. This seemed like more than a nostalgia trip, perhaps due to the fact that these songs don’t get played live, but it was fresh and energetic. Taking no prisoners this version of RevCo could and should tour to celebrate the next anniversary: 1987’s legendary concert that produced “LIVE: You Goddamned Son Of A Bitch” … well we can all hope!