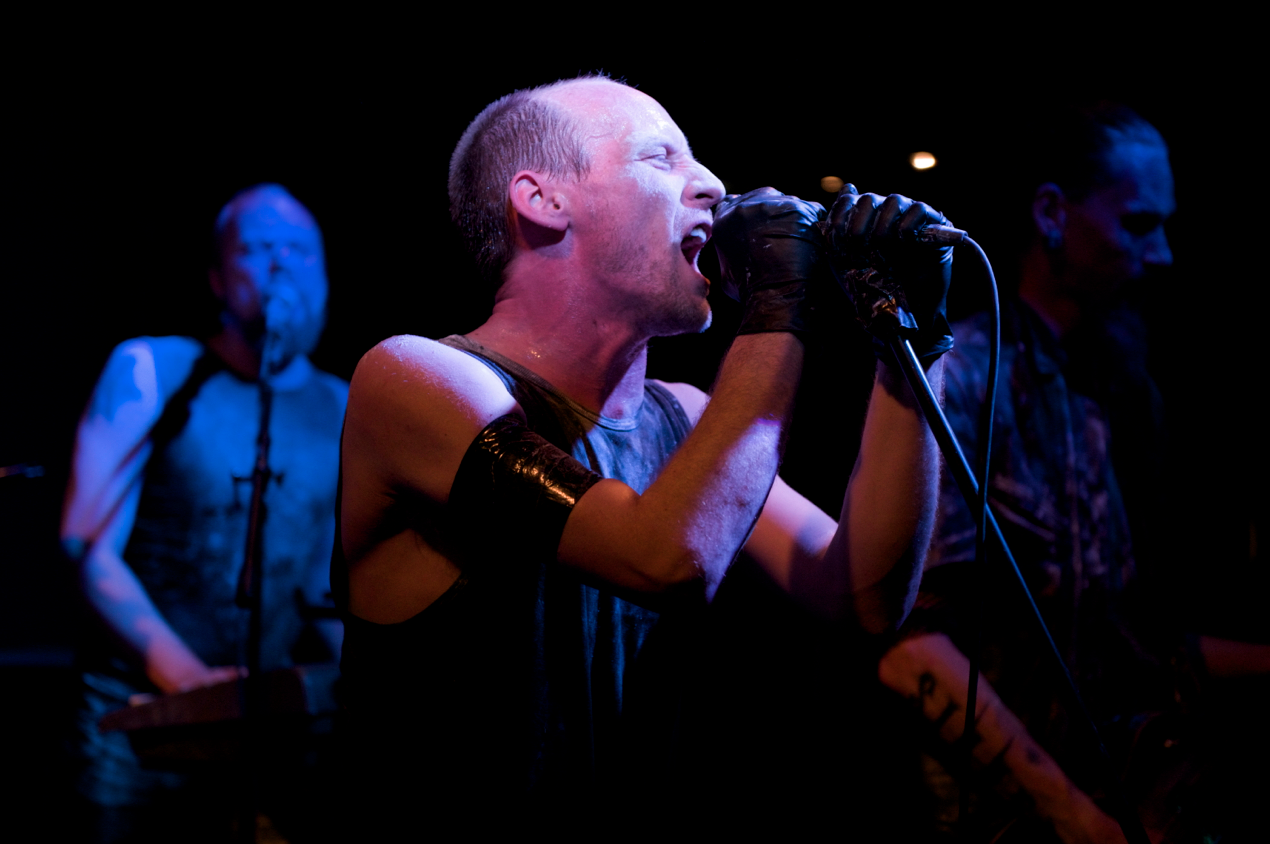 This past weekend, Chicago’s Nine Inch Nails tribute band, Now I’m Nothing, dominated the stage at the Bauerhouse in Lombard. It was during the annual Hearse Car Show with other bands, special guest like TV Horror Host Svengoolie and more. Mike Reidy fronts the band with his interpretation of Trent Reznor. His energy was impossible to match. He took command of the stage with every ounce of his body. So much so it looked like it hurt.  He’s joined by an extremely talented group of musicians who really channel the NIN vibe and equally prove their commitment as well; Michael Allen Rose on Keyboard and Vocals, Myke Shuberg Lead Guitar, Eric McWhorter on Rhythm Guitar, Karen Righeimer Bass Guitar and Ken Pilar killing the Drums.  Now I’m Nothing is a Chicago supergroup of sorts.  Each member is in and/or from another band in town.  This is a labor of love for them all.  This is their tribute to Trent Reznor and his Industrial vision.

I’ve seen Nine Inch Nails many times throughout the years, and a few tribute bands to boot, and can honestly say this is the closet rendition I’ve seen and heard to the real deal. This band takes what they do serious. It’s not a joke to them. They not only know what they are doing, but enjoy it. You could see it the entire performance.

Now I’m Nothing not only has the back catalog of NIN covered, but the look and feel too. Right down to the corn starched dusted bodies, leather and plastic wears, instruments, lighting and of course the energy. It’s done in just the right amount. Not over the top and in parody. They cover NIN songs from the beginning to the last release before Trent put the band on hiatus.  They’ve got the samples, keyboards, guitars and drums sounds dialed in to just about perfection.

Even though they didn’t take the stage until just about midnight, they still managed to get the crowd fired up and totally into it. And that’s saying something since the event started almost 12 hours earlier. They sang along, moshed and threw shit on stage in solidarity. I think they even have groupies as one woman yelled at me to get out of the way as I was blocking the view of guitarist Shuberg for a moment and a guy sat front and center shouting out loud to every song. Pumping his first when truly hyped up.

Some of the highlights from this show were clearly Reidy’s energy as he trashed about, Shuberg’s slide guitar work and seeing the collective group work and play off each other. A burlesque performance artist came out at one point during the show and chained Reidy up and put him in submission.  There are no slackers in this line up. Each one owned their part, no hesitation marks here.

If you are jonesing for some live NIN like I do, check out Now I’m Nothing.  Since Trent isn’t doing it anymore, this is the closest your going to get. And believe me, you won’t be disappointed.

For more info including tour dates: