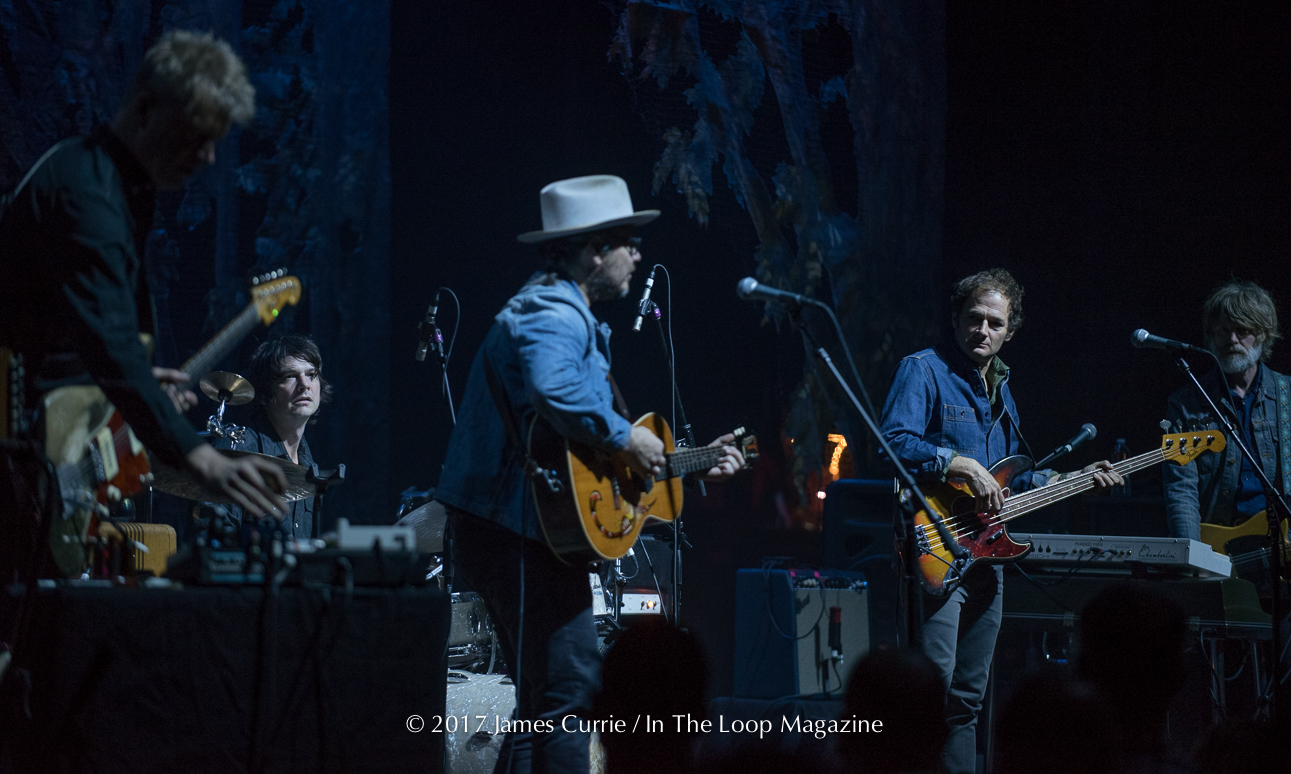 It’s hardly controversial, at this point, to label Wilco Chicago’s definitive rock band. After 22 years, 10 studio albums, and countless tracks defining the discreet agonies and ecstasies of Midwest life, the band has become a Chicago institution, and its phenomenal concerts – including night one of its 2017 Winterlude at the Chicago Theater – are ground zero for its fans.

But before Wilco even took the stage, concertgoers were treated to a remarkable opening set from The Flat Five, a local supergroup composed of top-notch Chicago musicians. Featuring Kelly Hogan, Nora O’Connor, Scott Ligon, Casey McDonough, and Alex Hall, the group is, as Hogan described it during the show, “a positive pop band,” and its five-part harmonies, delectable melodies, and sugar-sweet instrumentation left the audience enchanted. In an era of music where aggression is all around us, the welcoming sound of The Flat Five – equal parts Beach Boys, Brazil 66, and Lambert, Hendricks & Ross, with some kazoos and other modern sounds thrown in – was a most welcome breath of fresh air, and I cannot wait to see them live again.

Wilco took the stage shortly after – shoutout to the band’s crew, which set everything up in remarkably short order – and from its first song, the classic (and hauntingly prescient) “Ashes of American Flags,” the band reaffirmed why it is performing four sold-out shows at such a large and historic venue: Tweedy’s voice remains a phenomenal instrument, capable of wringing hidden meanings and narratives out of his literary lyrics; Nels Cline’s guitar lines defy gravity; Pat Sansone’s multi-instrumental brilliance covers everything from banjo, to organ, to glockenspiel, to his own guitar heroics; and the rhythm work of Mikael Jorgensen, John Stirratt, and Glenn Kotche is as focused and driving as ever.

The true pleasures of seeing Wilco live – and by this point, I’ve probably seen the group perform a dozen times – is picking up on the subtle variations in familiar territory, hearing how the group’s latest evolution has re-formed old classics. Like how the alt-country elements of “Misunderstood” were emphasized, or how “Pot Kettle Black” took on prog-rock touches, or how a stripped-down “Bull Black Nova” was even more threatening and unsettling than its angrier, louder iterations, or how the instrumental breakdowns of “Via Chicago” and “Spiders (Kidsmoke)” verged on Coltrane-esque free jazz, or how the eccentric folk beat of “Cry All Day” (from the band’s latest album, ‘Schmilco’) segued  beautifully to the ever peculiar “I Am Trying to Break Your Heart.” This is truly a band at the top of its game, and seeing it perform on its home turf is a pleasure.

For more info about The Flat Five, click here.

4. I Am Trying to Break Your Heart