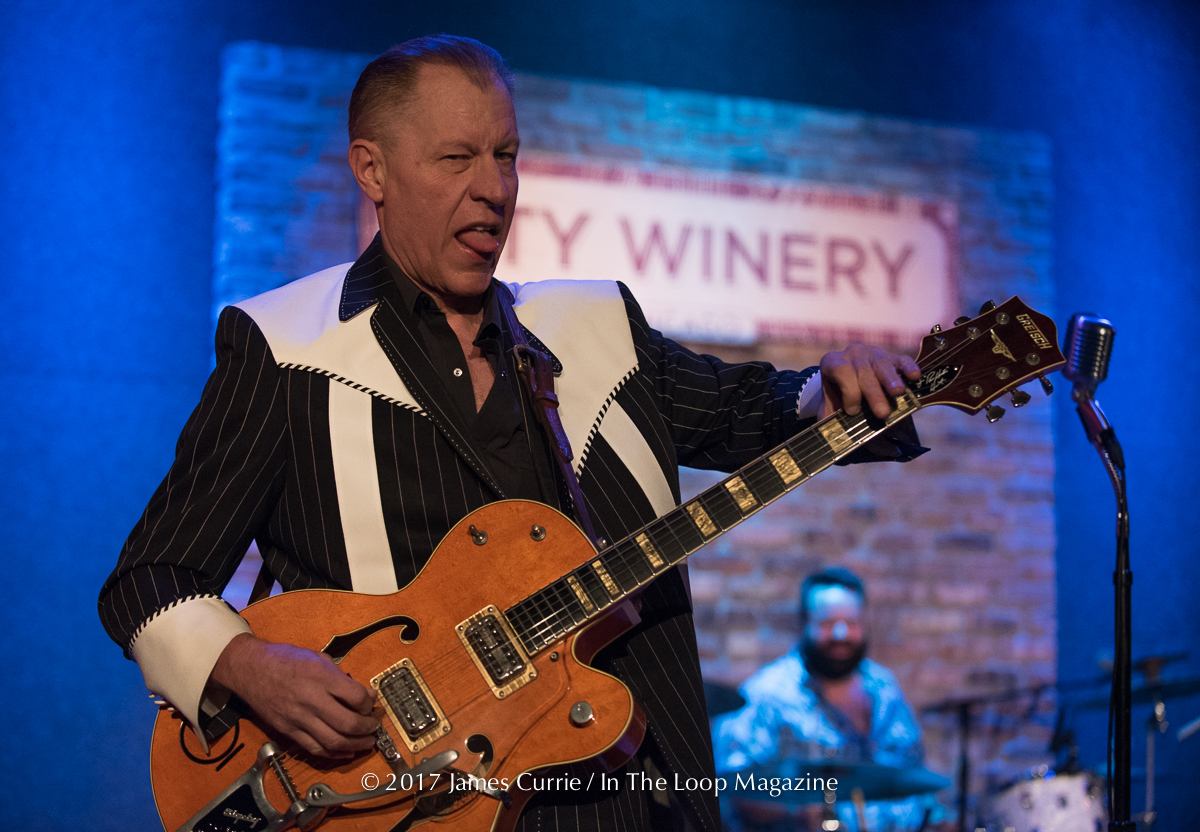 The Reverend Horton Heat performed for five blistering nights at City Winery in Chicago this past week. During their residency, the godfathers of Psychobilly brought out some amazing support to join them that included Unknown Hinson, Robert Gordon, Koffin Kats, Flatfoot 56, Delta Bombers, Flat Duo Jets and The Creepshow.

This tour dubbed, “The City Church Of The Reverend Horton Heat”, rocked the west loop brewpub like never before. During each night, a rare stage setup occurred as the normal dinner tables and chairs in the venue were removed so a massive rock club dance floor. And for this music, it was a must as fans were swingin’, jumpin’, jivin’ and wailing all night long.

On the Friday the 13th show, The Creepshow started the night off. As a matter of fact, this was the bands first night out on their current tour. This is a Canadian group of hep cats from Burlington, Ontario. It was a perfect night for them on the bill. Fronted by Kenda “Obi Wan Kendabi” Legaspi. She was like a live version of a Sailor Jerry tattoo, cute as a button and fiery as all get out. She rocked a red six string hollow body, crooned and swooned while keeeping the crowd manic as she jumped into the front row and got them to sing along with her. Some even posed for selfies as she walked by. Legaspi knows how to keep em alive and kicking and on this night creeped ’em out with the best of them.

The rest of the band equally as impressive and are comprised of Sean “Sean Solo, Sickboy” McNab gettin’ slap happy on the stand up bass and backing vocals. Kristian “Darth Ginty, The Reverend McGinty” Rowles more backing vocals and rockin’ and rollin’ the keys like he was driving a race car. Sandro “The Great Sanchini, Blood” Sanchioni absolutely killing the skins and tins I mean literally I felt sorry for his “Yamaha” kit. I saw bits and pieces of drums and cymbals flying around like the man was chopping wood. Chewing gum and not giving a damn about anything going on around him, Sanchini was a machine. New comer, Chuck Coles taking lead guitar like a Jedi master using the force of his Epiphone hollow body and VOX amp like a one two punch.

The Creepshow are a band I’ve been following for more than a few years. They were gracious enough to give me an interview and live performance at Reggie’s a half a decade ago for another program I was working on. Despite a few line up changes, they are still as genuine and real today as before. They have a unique sound when it comes to Rockabilly. Their songwriting a perfect spooky fit to the nights Friday the 13th theme with eerie songs like, “See You In Hell”, “Zombies”, Grave Diggers” and “Rue Morgue”. Who doesn’t love a good sing a long chant.

After the Creepshow blazed through almost 20 tracks, it was time for the main event to start. A short set and production change over and the lights drew dim for the one, the only, Reverend Horton Heat.

The two Jims and a Arjuna three piece skooled the joint like only they can. Jim Heath has been at the helm of the Psychobilly band since the late 80’s. Many other Punk/Rockabilly bands have sited The Reverend Horton Heat as a major influence and Heath specifically as an icon to the genre. His whimsical lyrics and whiplash smile have made them a trio of a different color. Again, following a perfect match for a Friday the 13th themed night of music, their songs are at times comical, but revolve around drinkin’, girls, fast drivin’ and horror. Tracks like, “Zombie Dumb”, where Heath does a silly sound and walk on stage, “The Devil’s Chasing Me” and the fan favorite, “Psychobilly Freakout”.

Heath’s long time swing-man is the equally legendary, standup bassist, Jimbo Wallace. His unique style of slap bass is recognized by his peers throughout the years. He a multi talented man who also sings and plays lead guitar as we learned during his tribute rendition of “Johnny B. Goode” in which Heath passes over his guitar and they swap instruments. Wallace is pretty good on guitar, but an absolute beast on bass. Heath told the story on how he once played through a show with his finger almost sliced off from a broken bass string incident. Heath asked him during that performance how he was after noticing blood running down his bass. Wallace responded by putting his mangled, bloody fist in the air and said, “Let’s Rock”. This inspired Heath to write the now infamous sing a long song, “Jimbo Song”.

New to the band was drummer, Arjuna “RJ” Contreras (who bears a striking resemblance to “American Pickers” co-star, Frank Fritz) a Wisconsin native returning close to home for this one. Contreras joined the band late this summer replacing longtime drummer, Scott Churilla. He not only held his own, but commanded a strong presence, not letting the opening band drummer go without notice as he too punished his drum kit. He kept a solid beat all night, this the third of a five night stay. Heath introduced Contreras to the fans and they greeted him with open arms.

During the set, a very dapper and debonair “butler” came out bringing drinks to the band. We soon learn it’s special guest musician Unknown Hinson who later in the set comes back out, picks up a guitar and rocks out a few songs with the band. For those who don’t know, Hinson (Stuart Daniel Baker) is a voice actor and musician. His current and most famous voice being heard on Adult Swim’s, Squidbillies as Early Cuyler but Heath let us know that he’s much more than a “purdy voice”. In fact, Heath claims he’s one of the best guitarists he’s ever heard as he brings the multitalented artist front and center for a few songs.

Chicago’s own, Victory Records artists, The Reverend Horton Heat, wrapped up the five-night residency this weekend and are keeping the rockin’ train rollin’ with more stops across the US. For more on that, click below.

For more on The Reverend Horton Heat, click here

For photos from The Reverend Horton Heat live in Chicago at the City Winery, click here

For photos from The Creepshow live in Chicago at the City Winery, click here