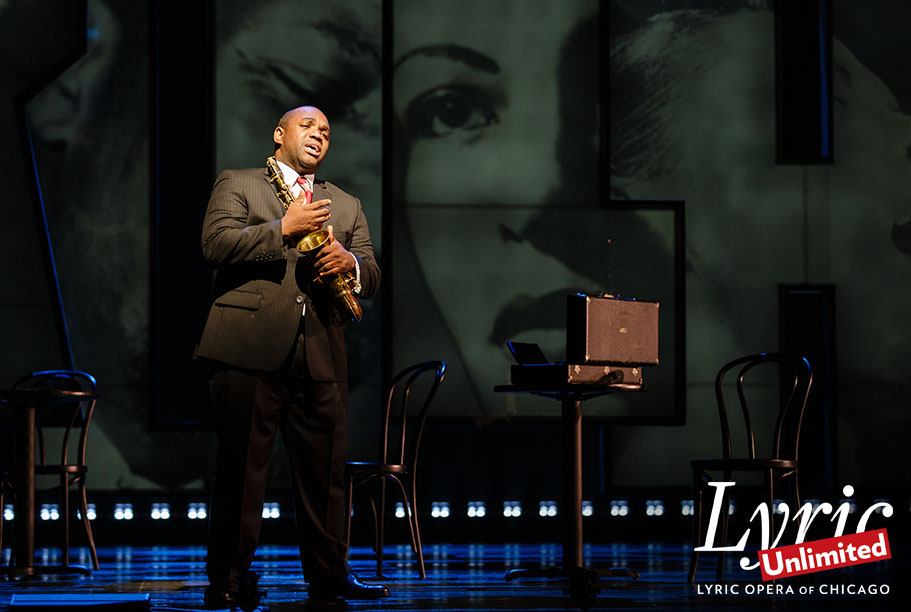 Charlie Parker was no mere jazz saxophonist. One of the founders of jazz’s bebop movement, he brought a virtuosity to the American art form that had never been seen, and in the process revolutionized not only jazz, but American music in its totality. As Miles Davis succinctly put it, “You can tell the history of jazz in four words: Louis Armstrong. Charlie Parker.” Or as Charles Mingus titled one his compositions, “If Charlie Parker Was a Gunslinger, There’d Be a Whole Lot of Dead Copycats.”

To take on such a titanic musical personality – and in a separate genre of music, no less – is an act of ambition that must be saluted, and librettist Bridgette A. Wimberly and composer Daniel Schnyder have tackled the subject with great passion and focus in “Charlie Parker’s Yardbird,” an expansive opera of the saxophonist’s life that is being performed just two times here in Chicago under Lyric Opera’s Unlimited series.

Set on the night of Parker’s death at 34, “Yardbird” is set in a purgatory, one where Parker (played by the wonderful tenor Lawrence Brownlee) is gleefully devoid of all the ailments that plagued him in life – heroin addiction, alcoholism, cirrhosis, depression, and infidelity, to name just several. Dressed in a crisp suit and in fine spirits, he begins working on the orchestral compositions he never had the chance to write while alive, but those same demons continue to haunt him in the afterlife.

Using that purgatory as a launching pad – one that is marvelously designed by Riccardo Hernandez – Wimberly and Schnyder touch upon many aspects of Parker’s life across the opera’s 90 minutes, including the love of his mother Addie, his complicated relationships with three of his four wives, and most movingly, his musical equal and partner Dizzy Gillespie. The cast is uniformly excellent, with Angela Brown’s Addie, Will Liverman’s Gillespie, and Rachel Sterrenberg’s Chan (Parker’s fourth and final wife) in particularly fine form. And as always, Lyric’s instrumentalists are pure perfection, and under the steady direction of Kelly Kuo, they weave their way through Schnyder’s dark, jazzy music.

And as if the strength of the opera were not enough, the Lyric ended the night with a superlative jazz set, which featured members of Orbert Davis’ Chicago Jazz Philharmonic. Featuring the lyrical Rajiv Halim Orozco on alto sax, the ensemble also included the air-tight rhythm section of Junius Paul on bass and Clif Wallce on drums, and for the set’s first half – gorgeous renditions of “April in Paris” and “Summertime” – the sound was bolstered further by a string quartet and oboe/English horn. Perhaps my favorite moment of the whole evening, though, came at the midway point, when Angela Brown (changed from her opera garb) accompanied Orozco on an exquisite composition set to Wimberly’s poetry, which crafted stanzas from the names of popular Parker songs; it was an air of mystery and wonder that only live jazz can create, and served as a most perfect tribute to Parker’s genius.

‘Charlie Parker’s Yardbird’ is playing March 26, 2 p.m. at the Harris Theater, 20 E. Randolph, Chicago
Tickets are available at harristheaterchicago.org/yardbird, or at 312-334-7777.