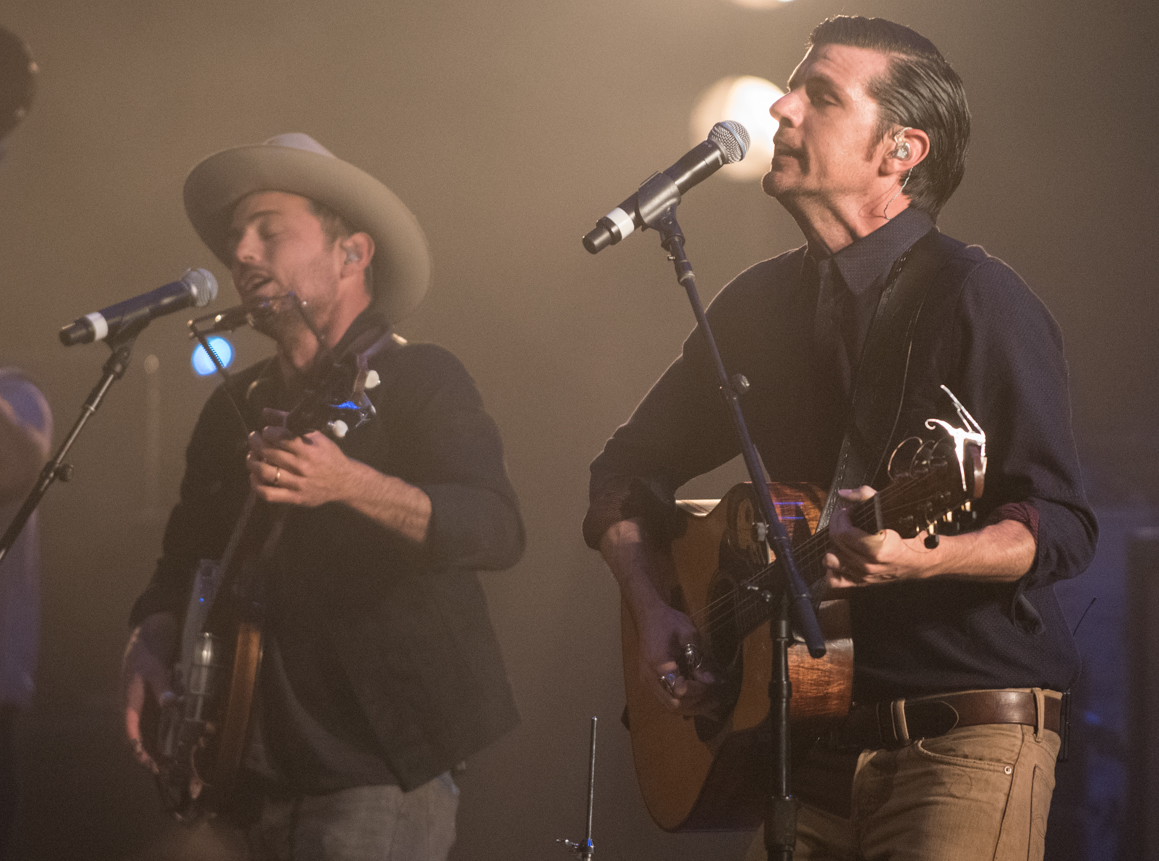 The Avett Brothers just completed a three night folky, roots rock-alternative bluegrass-punk-pop residency in Chicago at the historic Chicago Theatre.  Thursday, the first night, they did a medley that included a Prince tribute. Friday, the second night, Seth, Scott, Bob, Joe and the gang continued the journey before winding down the final show on Saturday night, but never loosing steam.

Saturday night’s show began around 8:30PM and lasted till around 11PM where they played an astounding 28 songs that included a 4 song encore. It started with the lights dim. The backdrop reveled a giant old wooden building that resembled an old country school house or church set in a wintery scene. A soft strum of a mandolin came in as Scott and Seth Avett joined up center stage to perform, Pretty Girl From Feltre. They performed it as a duo acoustic version that by the time the chorus came in had the rest of the band ramping up to fill in. This helped set up the nights performance. One that was full of sonic ups and downs.

Throughout the show the brothers greeted and thank the audience. At one point Seth told the fans, “We love Chicago from the bottom of our hearts.” And continued with, “Thank you so much for coming out and seeing us. it means so much”  They seemed to generally be happy up there. They played off one another. They bantered with people in the front row and told little stories. A little later in the show, Scott said, “Thank you so much again for letting us play these songs for you.” He then pulled on Seth’s arm and brought him in closer and said, “You know, it’s kind of weird, I realized today that I’m Seth’s little brother now and I’m older than him.” He then chuckled as someone said, “That’s sad.” Scott laughed as shouted back, “It’s not said!” then retracted back as Seth leaned into the mic as said, “That’s why he wears that hat… to feel taller.” The crowd laughed as Scott went back and grabbed a box to stand on to be even taller next to his little/big brother.

The night went on and they continued to dance around on stage and sung with great fervor. This time around, the live backing band consisted of Mike Marsh on drums, Tania Elizabeth on colin and Paul Defiglia on keys. They all seemed to interact well with each other as one big happy family.

The Chicago crowd was more than receptive to the Avett Brothers. The sold out three nights helped to prove that. There was no doubt that “Avett Nation” was in the house tonight. Looking around we noticed a woman in the upper right front balcony was signing and dancing her heart out. She knew every song word for word. She never sat down the entire performance and actually seemed to gain steam the longer the show went. The audience as a collective shouted votes of confidence and joy to the band during breaks. They sang along with the hits. They cheered like mad when they approved of something.

North Carolina’s Avett Brothers, prove they are a staying power. They’ve been around for 16 years and have no signs of slowing down. It’s not an easy task to sell out such a venue, let alone three nights in Chicago. This just proves, they have great song and even greater fans that’s growing with every year. This is a band of fans themselves as they are known for being music lovers at many levels.

“Spring 2016 Tour” is a long tour that will continue on to the release of their next album due late June, called “True Sadness”. They started a few weeks ago back home and are continuing on through late summer playing not only solo shows, but part of major festivals from coast to coast including a couple stops overseas as well.

To find out more about The Avett Brothers, their tour and music, click here

To see photos from the Chicago Theatre show, click here

To see video sample from the show, click here