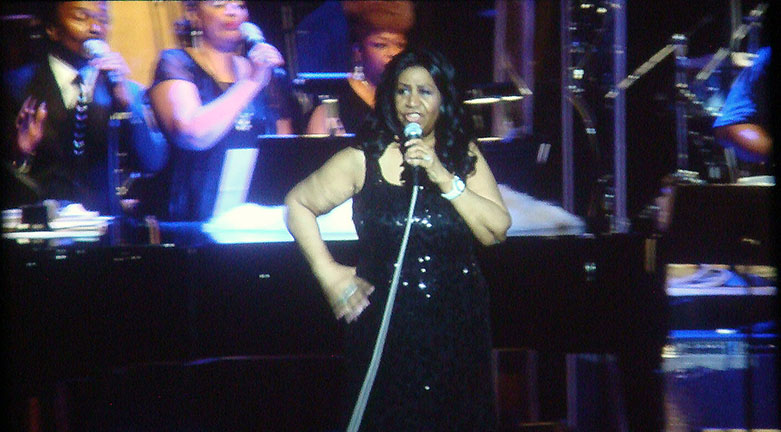 Aretha is touring to support her latest album Aretha Franklin Sings the Great Diva Classics and is no stranger to Chicago. She mentioned during her show that she remembers coming to Chicago as a child with her father who was a minister. Her father preached at various churches in the Chicago area while she sang gospel. While singing the Diva classics, she dressed as one too. She came out in a white glittering gown during her first set.

Aretha started her set with “(Your Love Keeps Lifting Me) Higher and Higher” and then went into “Baby I Love You”. She then sang a beautiful cover of “(You Make Me Feel Like) A Natural Woman”. Aretha then said, “You will remember this one from The Blue Brothers movie and then sang “Think”. She then did a cover of Diana Ross’ “It’s My Turn”. The crowd started getting into the show and clapped along to “Chain of Fools”. Aretha then took a twenty minute break while the band played instrumentals.

One of the reasons she took the break was to change into a black shimmering gown with a long white stole. Aretha turned the Ravinia pavilion into a church by singing the gospel song “Old Landmark” which was also in The Blue Brothers movie. During this song, she also sang about her experience waiting to go into the operating room. It was believed that Aretha may have had pancreatic cancer, but after more tests and CAT scans, nothing showed up on them. She then sang “Jump to It” which was produced by Luther Vandross and then “I Never Loved a Man (The Way I Love You)”. Aretha sat at the piano to play a soulful rendition of “My Cup Runneth Over” where she talked about her being in the music business for fifty years as well as coming to Chicago to perform during her early years. At the start of “Freeway of Love”, she gave a shout out to the IDOT and Illinois State police for helping her get to Ravinia when her tour bus broke down. She came out for the encore performing “Respect”, which is one of her most notable songs.