Al Jourgensen Doesn’t Fucking Care, But You Should 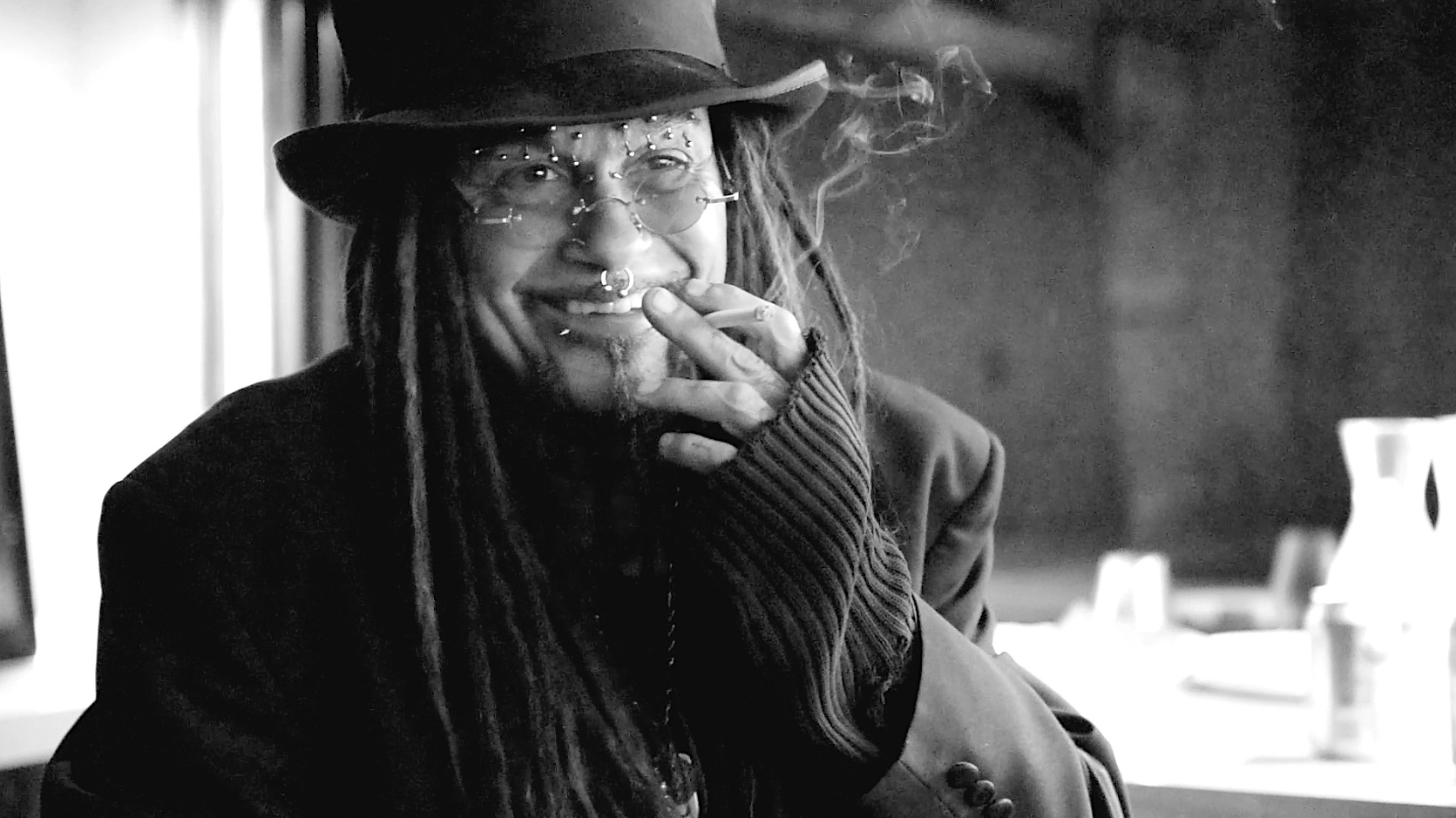 A night with Ministry’s Al Jourgensen at the HVAC Pub in Chicago where we discuss his birthday, new musical project and album, the Blackhawks and prostates.

What can you say about a man that has no secrets or cares in the world? Someone whose life story has been laid out in the pages of numerous books, magazines and videos all while fronting the most influential Industrial bands of all time. He seems to have done it all, but even at 57, Al Jourgensen proves he still has more to say and give.

I was invited to spend the evening with the man, the myth, the motherfucking legend, Al Jourgensen and what a truly special night it was. Friday, October 9th, was his official birthday. He celebrated it here, in his home town of Chicago with a group of rabid fans. That’s right, Uncle Al could spend his birthday literally anywhere in the world, doing anything he wants, and he chose Chi-town. And keeping with tradition and stepping out of the norm, usually the one with the birthday gets the gifts but tonight, we were the receivers of a very special sonic surprise.

Al and his girlfriend Liz Walton along with MC/Host Damon Ranger, played a live, DJ set that included a mix of Jourgensen classics that spanned across most if not all his music ventures (i.e. Ministry, Rev Co, Skinny Puppy, 1000 Homo DJ’s etc.), personal influences and likes, friends bands and ending with the biggest gift of all, listening to his newest project, “Surgical Meth Machine”. A speed metal project by nature, but much more intricate and diverse to get just one label.

Jourgensen tries to describe it, “You’re gonna like this new SMM. It sounds like no other band I’ve done. The first half of the album is pretty hostile and the last half is like, it seems someone has got his weed card in California!” He elaborated more saying, “The first half of the album is like, being on the streets of Wrigleyville, drunk as shit fighting Cubs fans and the last half of it is like, I got a weed card.” And he’s not lying about the card. He reaches into his pocket, pulls out his wallet to show me, he really is a proud “weed card” carrying California man.

Wanna see the video from this interview, click here.

From what we heard, the album is a psychotic rollercoaster ride. It will mess with your head, high or not. The first track is called, “I Don’t Fucking Care” and as Al states, it pretty much sets the pace for the entire album. He just doesn’t fucking care anymore, but that doesn’t mean we shouldn’t. This is another great addition to an ever growing list of side projects. It’s serious work by the founding father of Industrial music. Some parts make you want to dance, others make you want to chill and one or two will make you want to rip your face off. He’s got it all covered here.

Jourgensen, “At this point in my fucking life and career, I really don’t. I was really un-burdensome to not have the Ministry moniker or expectations. You can just do something like whatever the fuck we want. I mean the bands name is Surgical Meth Machine. It’s not like we’re going to be on the top 40 radio and on The Voice or American Idol.” He continued, “It’s not a commercial project for us. It’s not gonna put bank in my wallet, but it was a lot of fun to do.”

I asked him to elaborate and describe this new sound a little more? Jourgensen, “It kinda sounds like Ministry – a bit- or has that feel at points, but it’s a different level man. It’s like I just literally put my foot on the gas pedal for this record.” Earlier reports Al states this record will have songs that won’t be less than 220 BPM.

Fans of Jourgensen’s work are going to dig this one as well. It’s got lots of different elements in it. Your going to hear a little Ministry, a little Revolting Cocks and dare I say, early Ministry!? (yes, actually referring to his debut 1983 album, “With Sympathy”) No. Serious. We’re talking a little pop. A little dance. Hypo Luxa himself verifies it. “As I said, I just don’t give a fuck anymore and I’m actually kind of acknowledging a little of that first fucking horrible pop record I did in 1983.” (he still won’t mention it or any tracks off of it by name, but we’re getting close) “I’ve even got some crooning on some songs, some more pop songs and then just brutal assault. It’s a very dichotomous record. But it’s me and I’m acknowledging everything that’s been me for like the last 35 years. I’m throwing my balls on the table and hoping someone doesn’t have a meat clever.”

I asked how it came to be and who did he collaborate with on it. Jourgensen, “It was just me and my (long time collaborator) Sammy (D’Ambruoso). Yeah, Mr. D’Ambruoso came through with the beats and I’m doing all the guitars and bass on this and we split the vocals on it. We’ll see”.

And soon we’ll see how the growing group of fans downstairs feels as well. In a few minutes we were going to walk out and meet the audience that came to see and hear the legend. He was definitely ready and said, “I’m here. It’s not like I haven’t done this before. I’m ready. Let’s do this!”

Before we walked out to meet the crowd of adoring fans, we made a slight pit stop of sorts. Al asked me to follow him outside to the balcony. We talked about his age and how things are still pretty good for him mentally and physically. Went stepped out onto a metal porch. He said, “Watch this!” The proceeded to unzip his pants and say, “Check it out.” He leans into the railing, whipped out his dick and proceeds to piss over the edge into a garbage can on the other side of the alleyway. Creating a golden arch 30 feet high. “That’s pretty good right?”, said Jourgensen. “I’m 57, but I still have a prostate that works.” It was impressive. Even a couple unsuspecting and innocent passersby made comment, “Wow, that’s pretty good man!” I’m still also impressed, he didn’t get shocked as he pissed on several wires and what appeared to be power lines.

After our balcony break, we proceed back into the venue. We’re lead out into an area filled with fans waiting to meet him. It was a VIP meet and greet. He signed autographs, took pictures, shared drinks and stories, then headed down to the stage for the main event.

The lovely Liz was manning the controls and playing those classic tracks for the house of fans all while shaking it up with Al and other guest on stage. And all this while in 6” platform high heel boots. Al took the stage and the mic. He thanked everyone for coming out to celebrate his birthday and hopes they all enjoy his new music.

In between tracks, “The Alien” took to the drum kit that was on stage playing along with some songs. He banged the drums, the cymbals and sticks around in tempo and gave it a live feel. In between songs, he talked to the house asking how they were doing and to get up and dance. At times he mimicked vocals on the mic and even sang along with some tunes.

A collective sigh and cheer was heard when Mr. Jourgensen said the words, “might as well have fun people, cause isn’t Everyday Halloween.” Another reference to that forbidden time. Then, a hardcore, pumpin’ remix of “Everyday is Halloween”. Fan’s erupted!

When Al wasn’t taking control of the stage, he was out with the fans. He came out into the crowd to see friends and mingle. This continued throughout the night. I’ve been to some record release parties where that’s not the case. Some just let the DJ start the music, then retreat back into their dressing rooms. Not Jourgensen. He was there front and center the entire time.

After the DJ set of hits and mixes was over, it was time for the main event. The new al-bum started. He kicked it off and hoped we liked it. Then the first track hit. “I Don’t Fucking Care” dropped with a warm reception. By now, people were lining up at the front of the stage, mashing about and really coming to life. He continued through the entire album and by the end had a mosh pit going. After all, it wouldn’t be a true Jourgensen gig without one.

Before leaving the stage, someone brought out a birthday cake. It was red and black Blackhawks sheet cake complete with 666 candles. Al blew them out and symbolically ended the night.

I can’t wait to get this record and if you’re a Ministry fan, you’ll be clamoring for it too. After listening to all the tracks one after another, it works. You definitely go for a ride with this one. It will mess with your head, high or not. You get a sense of something familiar, but yet it’s truly something new.

No official release date yet, but check back with us often as we will make the announcement when it happens.

Wanna see and hear more from Al Jourgensen, click on our exclusive video interview. There, you’ll hear more about the new album, his “family tie” with the Blackhawks and dream of becoming the next GM and of course, the special announcement describing the Ministry reunion New Years Eve show and why he hates all you motherfuckers. Click here.

For the video interview and deeper discussion with Al, click here.

For more info on what Al’s doing next, his bands, history, music and more, click here.

8 thoughts on “Al Jourgensen Doesn’t Fucking Care, But You Should”