After 40 Years, The Dixie Dregs Reunite For An Original Lineup Tour That Includes A Stop At The Vic 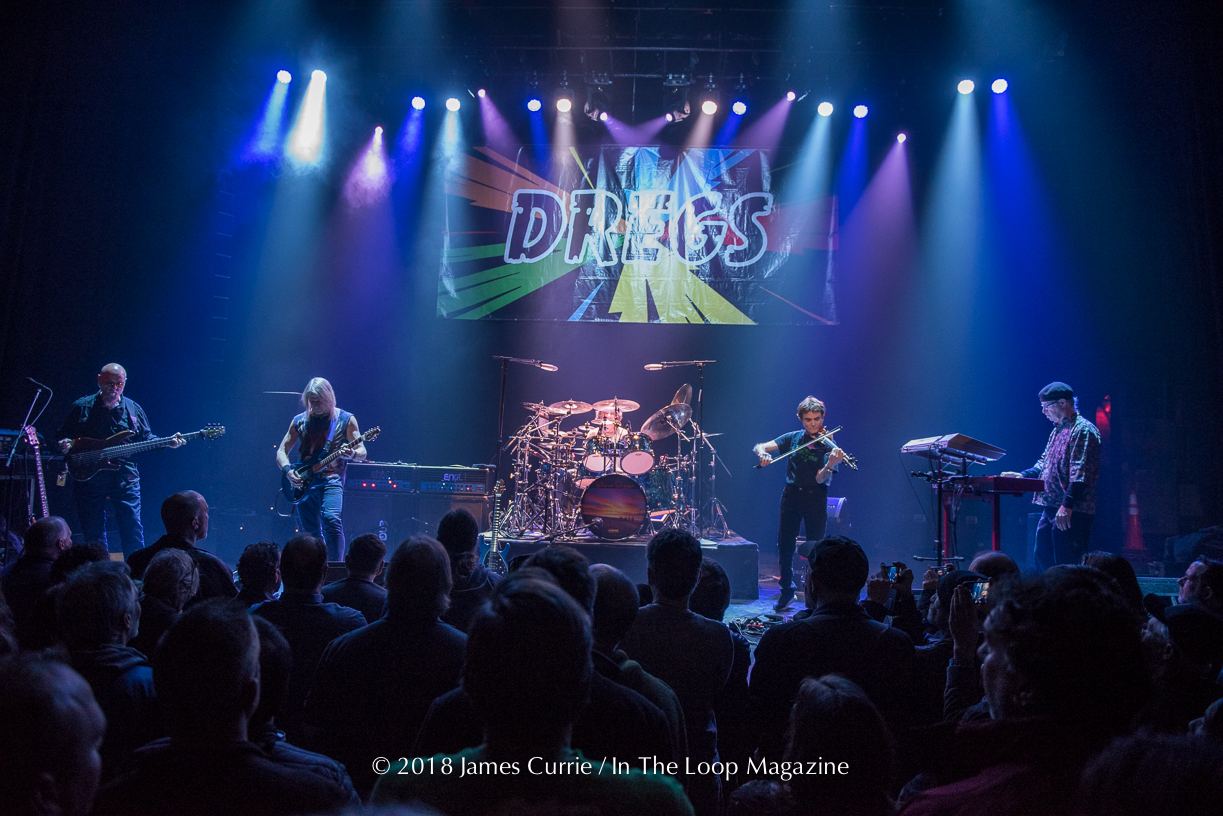 Dixie Dregs at The Vic

Dawn of the Dregs Tour 2018: The Complete Original Lineup

The Dregs return with a totally revitalized tour of the classic, original 1977 era lineup. This lineup consists of Steve Morse on guitar, Andy West on bass, Dr. Allen Sloan on violin, Rod Morgenstein on drums and Steve Davidowski on keys. This is the same lineup that brought us their debut releases like, “The Great Spectacular” and “Free Fall”. The 2017-2018 tour dubbed, “Dawn of the Dregs”.

This time around, Steve Morse continues what he’s been building for the last 40 years and brings it back full circle. This is the first time they all played together on the same stage since the late 70’s. Each member bringing something special to the stage as we all found out this night.

The audience was full of music fans and musicians from all around. One fan, Brad Shryack came all the way up, by himself, from Galesburg Illinois to see the show. Shryack, much younger than most in the house, said he became a fan in the late 90’s. Long after the band had stopped releasing new material, but still continuing to play live in some form. Like most in the venue, Shryack is a musician. A guitarist and teacher of the six string that admires each member of the Dregs but especially Morse who he claims is a major influence in his guitar playing. Shryack said he was especially interested in hearing how this lineup would sound since it’s not the one he grew up listening too. Also, that he was curious to see how Morse would sound, with the new ENGL amps and “frankentele” guitar rig and how he would play since he was having problems playing guitar with his bad hand (which we saw wrapped up during the performance). The show started and all eyes and ears turned towards the stage.

The show started with “Divided We Stand” and the band played through 10 tracks before taking a break. During the time on stage, Andy West spoke to the fans telling stories on how the tour has been going, how great it is to be playing together again and gratefully thanking the audience for still be interested in seeing and hearing them live. At one point even calling the fans out saying, “I know we don’t have any musicians in the house, but… (audience laughter) this next song is a bit difficult to do.” He then continued saying, “We all have a different opinion on what beat is the start and what measure we go in at. So you might see feet taping at different times for this one, but we think we can figure it out. At least we all agree it ends on 4/4.” Then they broke into “Day 444”.

Half way through the show, they took a break and came back for set two. This time Morse spoke a couple times as well as West. They talked about how this second half was going to be a little different. That we’d hear some hits and more. The set started out with Dr. Sloan on violin. He talked about how this was so much fun for him and the song he was going to play was one he wrote for his daughter. He then played “Rachel” followed by a duet with Morse, “Northern Lights”.

From there, we heard another half a dozen songs, some amazing solos from each member of the group where at one point, they all traded off licks in a row and it sounded like a stereo whirlwind of melody that was something to witness. What a tight roll off each others playing. This really got the fans riled up. And of course a great rock show of fine musicians wouldn’t be complete without a drum solo. We got an amazing little ditty from Morgenstein on the skins and tins that left no hand free.

The show was coming to a close. The band walked off but soon returned from the audience cheering for an encore. They came back and did one more song, “Bloodsucking Leeches” before calling it a night.

There was some truly amazing stuff happening on that stage that night. This is the first time some of the members have played live in decades. Allen Sloan (now an M.D.) left music to become an anesthesiologist and Andy West traded in the bass for a mouse and worked in the software industry. From this performance, you’d never had known it as they were still as tight as can be and for this kind of music, you have to be. There is no room for error.

When the show was over, I asked young Shryack what he thought and he just said, “Awesome”. I asked him to elaborate. He said, “This was just as good as I was hoping for. I was really curious how that ENGL amp would sound. Those seemed to be more for hard rock and metal guitarist, but between the tones on Morse guitar, the effect pedals and tuning, he nailed it. It all sounded great live.” So I think it’s safe to say this was a good one. The true music fans and musicians have spoken and they liked it. That’s got to count for something.

For more on the Dixie Dregs including current reunion tour, click here

For photos from the Dregs live in Chicago at The Vic, click here

Setlist from the Dixie Dregs live in Chicago at the Vic Theatre March 24, 2018