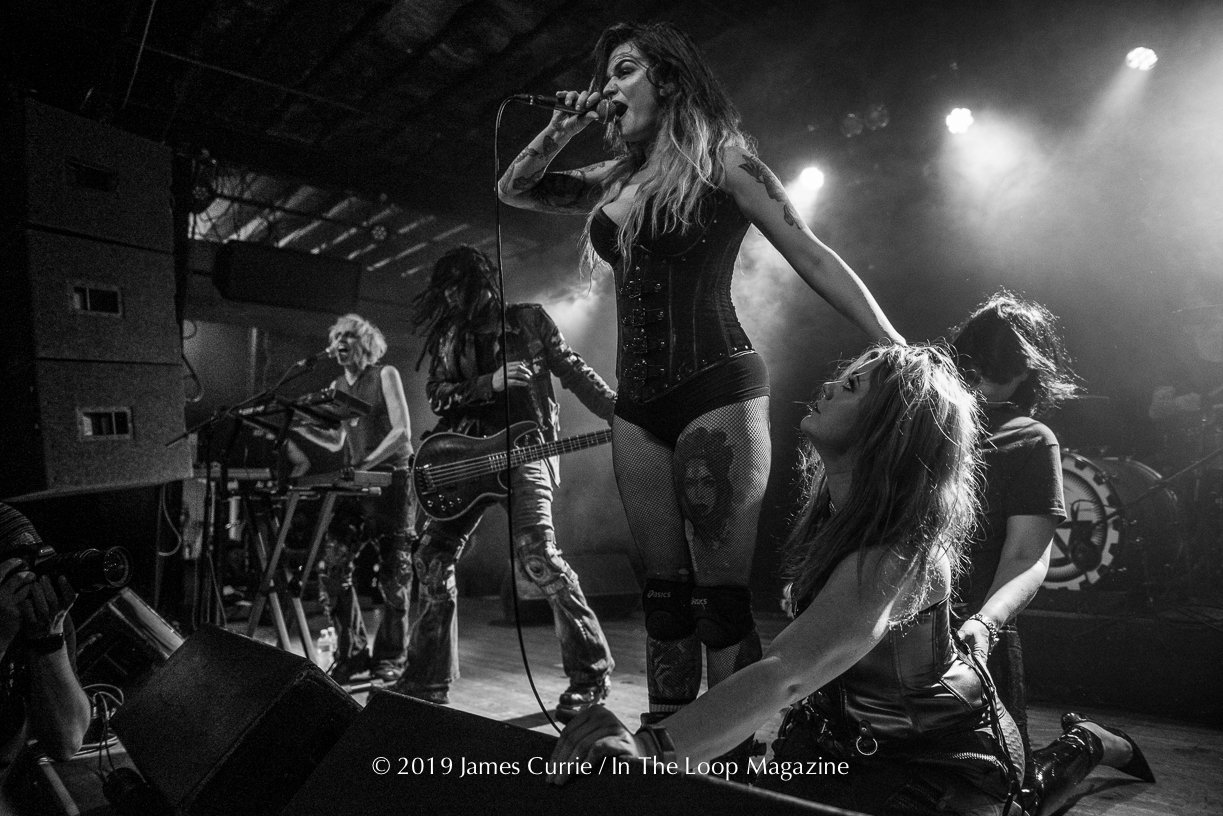 The acid-heads, some in their fetish outfits, came together to see Lords of Acid, the innovators of the acid house/industrial/techno movement at Bottom Lounge. Praga Khan formed his dream into a group in the 80’s. Even though Praga is the only original member from their inception, he has a great group of musicians on stage with him. Marieke Bresseleers (lead vocals), Galen Waling (drums), DieTrich Thrall (bass) and Sin Quirin (guitar). Galen, Thrall and Sin showed how they were locked in together from the beginning, as Marieke’s vocals were outstanding as this is her first time with the band.

Lords of Acid are on tour bringing their latest creation Pretty In Kink (the sixth studio album) to the masses in a huge way. Like many of the previous albums “Pretty In Kink” drives industrial beats, combining them with crushing guitars, abrasive sexual lyrics, sprinkling in references to drugs while keeping a good humor to many of the songs. ‘Break Me’, ‘Sex Cam Girl’ and ‘My Demons Are Inside’ from Pretty In Kink all fit in nicely being played live to the screaming crowd.

Lords of Acid came out firing on all cylinders as they opened their set with ‘Sex Bomb’ one of their hits from 2001. The crowd was instantly in a furry dancing and moving around when the drums kicked in. After ‘Sex Bomb’ they bombarded the audience with ‘Scrood Bi U’ where Marieke made her debut, pointing and interacting with the crowd.

Everyone was feeling so good to feel so bad when they played ‘Out Comes The Evil’. The audience was jumping and singing along with Praga and Marieke. Praga surely enjoyed his time on stage as he was constantly smiling throughout their set. Even telling the crowd that Chicago is one of his favorite places to visit and play. The heat in the room intensified as ‘Rough Sex/Take Control’, ‘Rubberdoll’ and ‘Voodoo-U’ were played in order. An inflatable sex doll was manhandled on stage to the cheers and screams of the crowd during ‘Rubberdoll’.

Marieke, in true party fashion, called for the girls to come get on the stage during the opening of ‘Pussy’. Need less to say that about a dozen girls decided to climb over the barricade and to live in the positive atmosphere of the night. The party was not close to slowing down as ‘My Demons Are Inside’ made it’s live debut to Chicago. I could not tell any lows in the set. With so many great songs, Lords of Acid, was able to swap various songs from the last time they played Bottom Lounge two years ago.

As if the crowd could not get any higher, Lords of Acid, started their two-song encore with ‘Let’s Get High’. Many people were capturing the moment on their cell phones as the night finished up with ‘The Crablouse’, a great ending to long full-filled night, which lasted just before one in the morning. Worship the Lords if they are coming to your town or make the drive to see them. It is worth the trip and an outstanding show.

For more on the Lords of Acid including tickets to the Pretty in Kink Tour, click here

For photo gallery of the show at Double Door, click here

For video sample of the Lords of Acid at the Double Door, click here

Setlist: Lords of Acid live in Chicago at the Bottom Lounge March 7th, 2019