A Night In A Cemetery With Beer, Food And Music From MONO? Yeah, It’s A Thing. 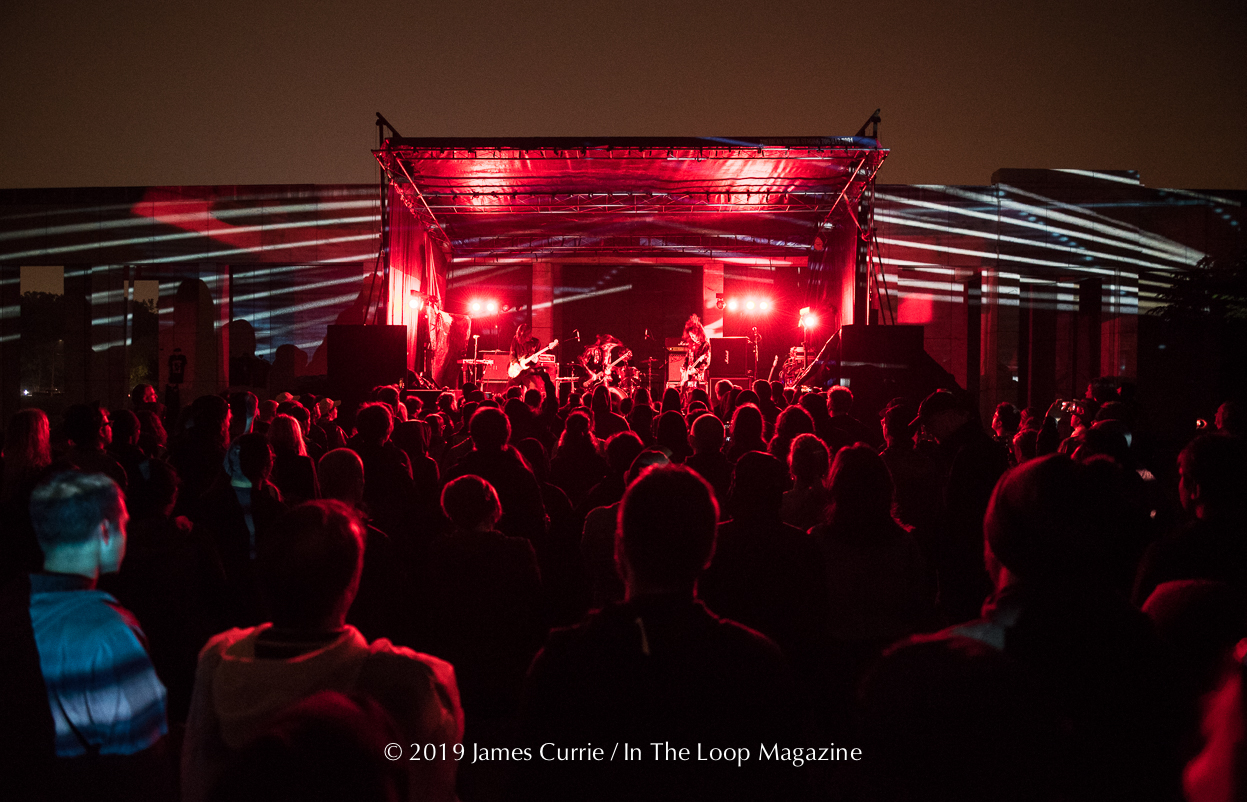 Chicago’s Empty Bottle is known for eclectic shows. They’re known for bringing out artists that are on the bleeding edge of modern underground indie music. Well now they have something even more underground to add to their DIY resume of bringing interesting music to the masses by presenting a mini festival in a cemetery. Yep, you read this right. For the past seven years now, EBP has been partnering with a northside graveyard, Bohemian National Cemetery, in celebrating life next to death with a small stage featuring incredible talent, locals brews and snacks and even specially made poster art to commemorate the event.

For this event, The Empty Bottle Presents ‘Beyond The Gate’ with several bands and the main headliners, MONO. The Tokyo Japan based quartet whose spooky and etherial sounds meld an eerie fit to this otherwise macabre event. This is their final show before taking some time off from touring before moving on to the European leg.

The event started around dusk. To add to the already creepy night, dark clouds loomed overhead most of the day into the night bringing soaking rain, fog and mist that lasted off and on the entire night. But that didn’t stop the fans from showing up. The designated mausoleum space on the north end of the grounds filled up quickly with fold up chairs, blankets and folks wearing their waterproof monster mashers.

After a couple openers warmed up the crowd, MONO took the stage. At this point, it was near 100% dark and the rains had stopped just as the band was walking up to the stage. It was a dark show. Low lights. Random projections shown on the back walls of the staged area that reflected off the mausoleum crypt doors and marble pillars and swirled around like the sounds they produced live.

MONO started the tempo off slow with aptly titled, ‘God Bless’, the opening track off their latest release, ‘Nowhere Now Here’ then right into the second track, ‘After You Comes The Flood’. Any irony here? From there the show sounded amazing… until… power outage. During the middle of the set, right in mid song, the stage suddenly went black. The tower of PA speakers when silent. But the band played on. Seemingly unaffected by the lack of back up power, the band didn’t miss a beat and finished the lengthy piece til the end. When the audience first saw the blackout, most expected MONO to stop, but when they didn’t, they erupted in great cheer and fanfare. This really proved the band are consummate professionals. It was actually kind of amazing to hear them this way. It was like a private show in a rehearsal space. Very intimate and still sounded amazing as their personal gear still worked in the dark. This band’s sound is like riding a wave of emotions. This nights space, was a surprisingly perfect pairing that absolutely complimented each other.

When the power came back on, MONO continued well into the evening. They didn’t say much throughout the night, if you don’t know the band, they don’t have lyrics. But they also didn’t converse much beyond the end saying thanks.

Seeing MONO this way was one for the books. I mean, not just because they played live in a cemetery, but all that happened around them during it. We witnessed something special that night and I know I’ll never forget it. I only wish I could see it again.

For a photo gallery from that night in the graveyard, click here

For a video sample of a song from that performance, click here