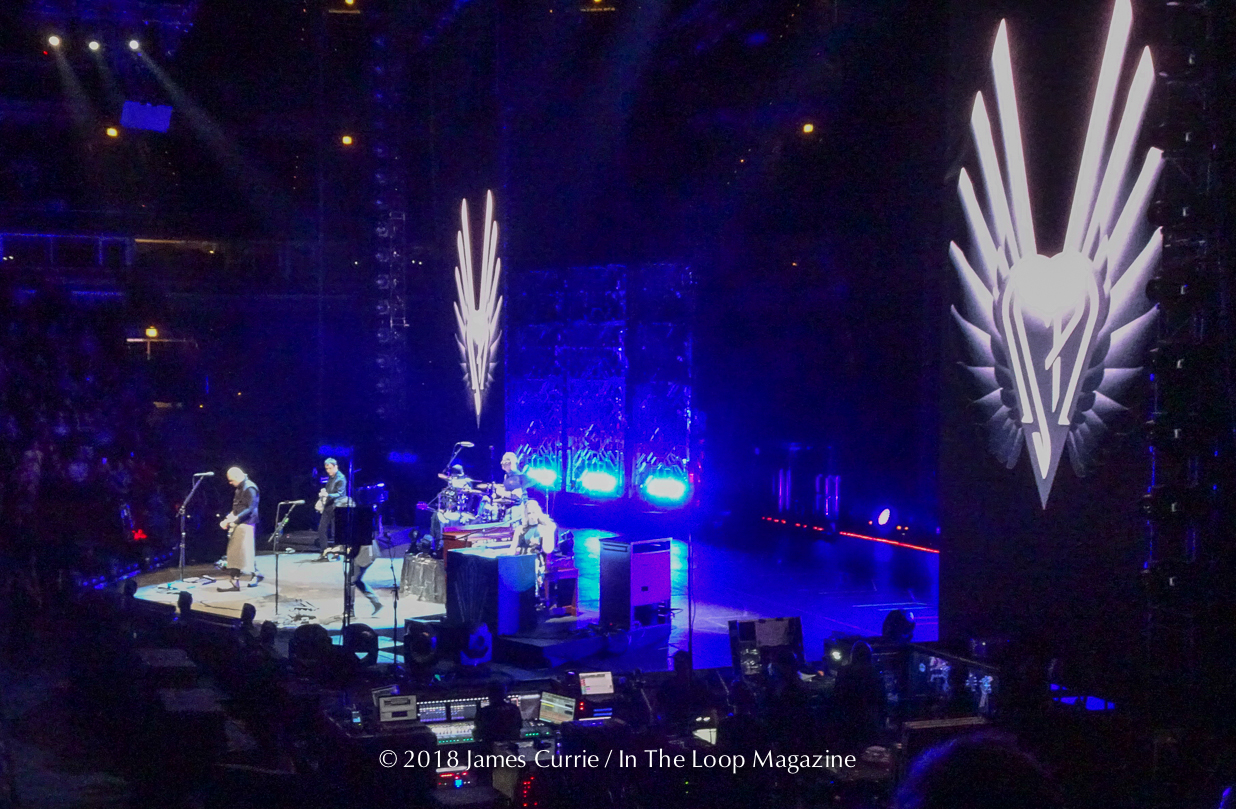 Well, friends, the Shiny And Oh So Bright tour finally arrived in Chicago. The much-storied, much-discussed, much-rumored ‘reunion’ of The Smashing Pumpkins landed at the United Center on Monday for a two-night stand, and the waiting was over for those who wanted to see what founding members Billy Corgan, Jimmy Chamberlin, and James Iha had up their sleeves after months of speculation.

Though if we’re being honest, this feels less like a reunion by definition and more like the natural evolution of a band that has never followed a typical script. Chamberlin has been back behind the kit since 2015, and Iha made a couple of storied appearances on 2016’s In Plainsong tour, as well as working with Corgan on new songs that appeared on Corgan’s solo album (and, bassist D’arcy Wretzky’s absence holds it off from being a true ‘reunion tour’ in the Black Sabbath or KISS sense).

Less so a by-the-numbers method of crafting a more ‘classic’ feeling lineup, this tour feels like the light at the end of the tunnel for long-time musical partners who happened to take different paths for a while. Rounding out the lineup was keyboardist Katie Cole (Corgan has a real knack for finding the perfect accompanying musicians to fit the mood of a tour, and Cole is one of his strongest entries), bassist Jack Bates, and long-time Pumpkins’ guitarist Jeff Schroeder, who has been a member since 2007.

Opening with Corgan alone on stage to perform a straight-forward version of ‘Disarm’ accompanied by home movies and manipulated photos of Corgan as a child (the faithful recognized the style of the images as that of the liner notes from Siamese Dream), the band followed with the one-two punch of ‘Rocket’ and ‘Siva’ (one of only two songs featured from the band’s 1991 debut, Gish), and the rest went on to showcase a band that is playing in absolute top form after nearly 30 years.

Allowing Iha the task of MC for the evening (and damn, was it great to hear his dryly hilarious banter again in the context of an actual Smashing Pumpkins show), Corgan let the setlist do most of the talking. It was a setlist that had a lot to say; deep cuts upon deep cuts (‘Soma’ and ‘For Martha,’ Corgan’s deeply affecting tribute to his late mother), b-sides (the Iha-penned ‘Blew Away’), and hits galore fleshed out a full three hours without a sign of slowing down, even by the end.

A few pre-recorded video segments served as intros to songs and featured Corgan as well as a vaudevillian Mark McGrath (yes, I’m serious) providing the intros and crowd-rousing for ‘1979’ and others, but for the most part, aside from a few thank-yous, the usually talkative frontman was content to blend into the visual backdrop and the subtly-designed theater lights that framed the stage; a continual kaleidoscope of Art Deco illustrations bringing the Mellon Collie angel to life alongside artistic representations of Corgan in various incarnations played across the back of the stage, a mix of mythological and mystical imagery that proved a perfect accompaniment to the psychedelic, sometimes spiritual themes of Corgan’s lyrics.

The band even brought a few covers into the fold with equal strength. ‘Space Oddity,’ appearing just a few songs in, made its way here from the In Plainsong tour, though the addition of a third guitar gave it some heft in the choruses as Corgan stalked the stage in a silver cape.

And one of the night’s biggest surprises was a complete version of ‘Stairway to Heaven’ that saw Corgan start out on piano before handing it off to the rest of the band to steamroll. Schroeder’s solos were perfectly on-point (as they always are, the guy is an ace guitarist who deserves far more credit than he’s typically given).

And Chamberlin…well, Chamberlin was Chamberlin. If ever Bonham had an heir apparent, it came to us as Jimmy Chamberlin. (Not that we didn’t already know that. The man is a national treasure and we should be discussing statues, at this point.)

‘Smashing Pumpkins doing “Stairway to Heaven.” You can cross that one off your bucket list now,’ Iha joked at the end. Closing with ‘Solara,’ SP’s new single from their forthcoming new album, and a sweetly earnest ukelele cover of ‘Baby Mine’ from Disney’s ‘Dumbo,’ there were nearly no rabbits left in the hat by the time the band left the stage after midnight.

Of course, there were other songs that would have been amazing to see – ‘Thru the Eyes of Ruby,’ ‘Geek USA,’ ‘Snail,’ ‘Age of Innocence,’ the list goes on – but that’s just throwing darts at the wall. This is a tour about coming together in multiple ways, both for the band and their fans, as The Smashing Pumpkins have endured and thrived long enough to become a multi-generational affair. The UC was filled with teenagers of those who were teenagers when Siamese Dream unexpectedly hit the air waves in 1993 to lead a revolution of sorts, a focus on confessional songwriting that hadn’t been seen since the early ‘70s and carried into the ‘emo’ and post-punk eras before circling back again.

And for those who have hoped to see Corgan and Iha together again, it was tough not to feel a lump in your throat seeing them riff on the intro to 1993’s “Mayonnaise” together, one of the band’s most affecting songs, and one of the only tunes for which Iha is legitimately co-credited. Later in the set, “Hummer” was an unexpected surprise and moment of elevation, one of the band’s finest deep cuts with an outro so lush you can practically feel it on your skin. While in 1993 it might have seemed strange to imagine seeing that song in a sports arena with 30,000 people singing along, in 2018, it makes perfect sense.

Because The Smashing Pumpkins were always about pushing forward; from the very beginning, they were multi-platinum outliers who found their way to the mainstream through the sheer power of Corgan’s songwriting and a level of ambition shared by few of their contemporaries; that this was/is often lost on those only familiar with their radio output is perhaps understandable. They’ve earned this tour, and the long-time fans have earned it, too. It was at once catharsis and celebration, wrapped up in some of the best songs of the last three decades.