Guns N’ Roses – Yes, In This Lifetime And Live At Chicago’s Soldier Field 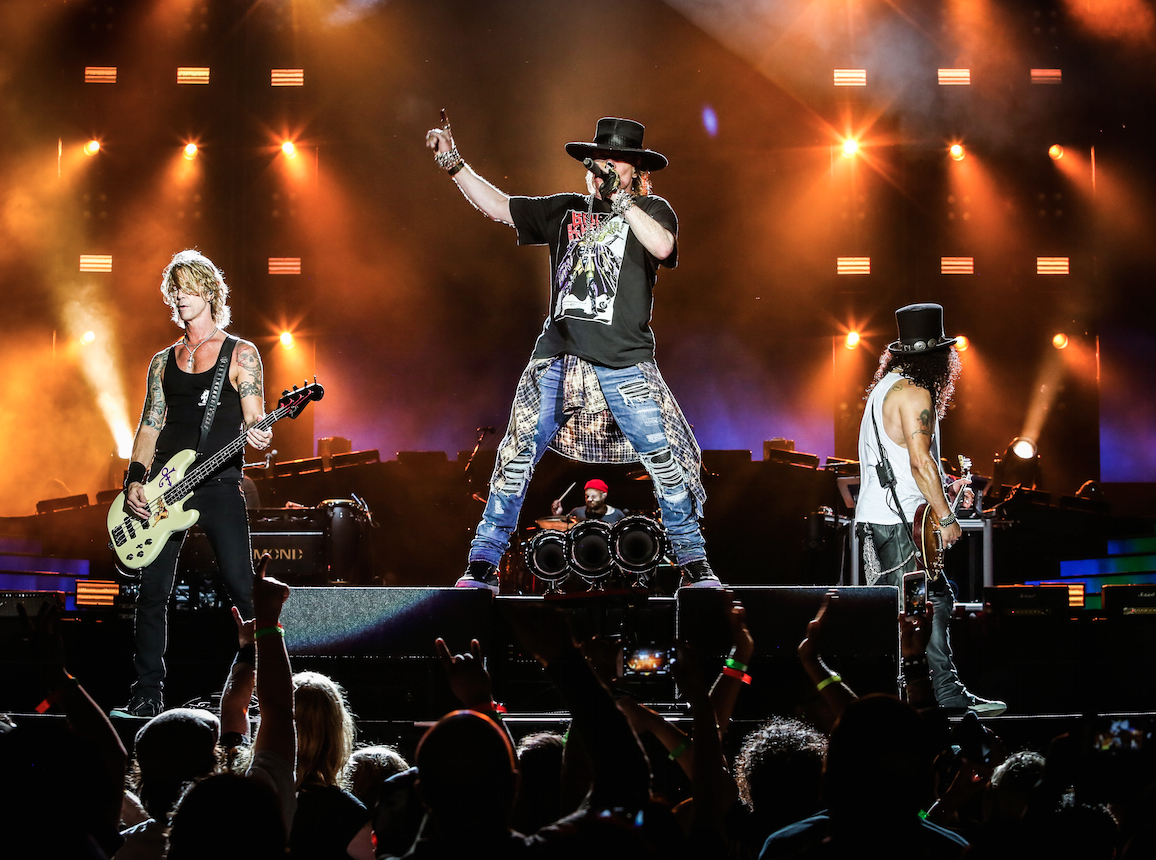 Let’s wind the clock back to the early ‘90s.

Guns N’ Roses represented the last of many things: the over-indulgent music video era, the stadium rockers who only marginally outgrew their Sunset Strip, hard-living lifestyles. Guns N’ Roses were the last truly great American rock band, and the flame out of the “Use Your Illusion” lineup was likely unavoidable given the massive egos, endless drugs and groupies, oceans of money—the quintet was the very definition of ‘excess,’ and they wore it like a badge of honor. As a rock fan, honestly, it was a sight to behold.

But things change, assuming you want to live to see your 40s (or even 30s, in some cases). Fortunately, everyone got clean and sober and went about their business following the almost three year tour for the “Use Your Illusion” albums from 1991-1993, though the bottom line was unpleasant: serious acrimony between Axl Rose on one side and founding members Duff McKagan, Izzy Stradlin, and Slash on the other. Truly, there have been few band reunions in the passing years that were more unlikely than any configuration of Guns N’ Roses as the world knew and loved them. Solo albums followed to varying degrees of quality; Axl moved forward with the release of 2008’s Chinese Democracy and numerous tours featuring a revolving door of band members, creating a culture of disposability in the band’s image. (That statement is no reflection on the talent of those members—all were credible, excellent musicians, but it didn’t take a historian to recognize that there was a magic about the founding lineup that would be impossible to recapture.) There was a real danger in the Guns N’ Roses of yore, a sense that anything could—and often did—happen. Electric toxicity, lightning in a bottle wrapped around truly great rock songs: the magic formula for a lasting legacy.

So when Axl, Duff, and Slash buried the hatchet earlier this year, many of us started putting our hands to the ground and gauging the temperature. Had Hell indeed frozen over? Were we actually going to get a tour from this newfound civility?

And furthermore…would it be any good, could it live up to the grandiosity of the glory days? The risk of becoming a larger-than-life band that also, somehow, continues to exist down the decades is the risk of legacy outweighing reality. It’s inevitable, maybe, that every big band who sticks around, at some point, finds it increasingly difficult to exist in their own shadow.

Somehow, against all odds, Guns N’ Roses have defied that, as the Not In This Lifetime tour arrived at Soldier Field for a nearly-three hour holiday weekend extravaganza on Sunday.

Opening with the classic “It’s So Easy,” GNR took the stage for a nearly three-hour show that brought into sharp focus why they should unquestionably be counted among the greatest rock n’ roll bands of all time, with more beloved singles that most bands have songs, and an element of showmanship that is, at this point, bone-deep.

The set leaned, understandably, toward Appetite for Destruction, with a liberal dose of cuts from both Illusion albums, a few covers, and even three tunes from the aforementioned Democracy (the title track of which is one of GNR’s most underrated thrash-rock tunes). Axl’s voice has aged in a predictable way, but McKagan always took up a criminally-overlooked slot in GNR’s arsenal, providing consistently strong backup vocals and offering a quick-and-dirty asskick of Iggy and the Stooges’ “Raw Power” with a little Johnny Thunders thrown in for flavor. McKagan was always the punk-rock voice in GNR’s lineup, with Slash finding a unique balance between blues and thrash.

Which brings us to the night’s MVP. There’s no question that this lineup (which also consisted of guitarist Richard Fortus, drummer Frank Ferrera, keyboardists Dizzy Reed and Melissa Reese, all excellent players in their own right) is a tight, nuanced rock band, as the numerous opportunities for interplay in tunes like Illusion deep-cut “Coma,” an audience-participation version of “Knockin’ On Heaven’s Door,” and an extended version of “Rocket Queen” proved. But make no mistake with regard to the biggest selling point in this partial reunion: Slash.

From a fan standpoint, I will never forget the first time I saw Slash back in 1988. He is, as he was then, the embodiment of rock n’ roll: a great look, enough effortless on-stage swagger for a dozen bands, and a unique style that has helped define rock music post-1990s.   And indeed, in spite of the band’s overall prowess, he carried the night, offering solo after solo, a solid rendition of “The Star-Spangled Banner,” an instrumental interlude with Fortus on Pink Floyd’s “Wish You Were Here”…you name it, Slash played it, and it was clear from the get just how integral his musical voice was to the original Guns N’ Roses sound.

(Sidelight: it should also be noted that founding guitarist Izzy Stradlin was indeed missed. The yin to Slash’s yang, Stradlin was responsible for some of GNR’s most beloved tunes; his laid-back, Keith Richards’ style of playing and singing was a perfect compliment to Slash’s flash, and his inclusion in this reunion would have taken things to a whole new level. Listen, we can’t have it all, folks.)

If anything, Rose proved to be the night’s biggest surprise, as he seemed genuinely willing to step back and let the band do the talking, something that couldn’t always be said of 1990s Axl, who simultaneously ate up the spotlight as he seemed to revile it. Basking in the crowd’s adulation and frequently smiling, Rose offered numerous thanks and shone on tracks like ubiquitous ballad “November Rain,” the contemplative, crushing “Civil War,” and classic Appetite blaster “Out Ta Get Me.”   A full-on fireworks display accompanied show closer “Paradise City,” which turned, predictably and wonderfully, into a stadium-wide singalong.

Neil Young once sang ‘it’s better to burn out than fade away.’ Those words have hung like a doomsday clock over rock n’ roll since its inception and have reappeared time and again as we look at the ever-evolving genre in the big picture of musical history. Of all the American rock bands, the GNR of old looked—at best—poised to gloriously crash-and-burn in a blaze of glory. It could be argued that real, dangerous rock n’ roll is the domain of youth, and that may be true. But it was a pleasure to see a mending of fences and a renewed meeting of talent in the 2016 version of Guns N’ Roses. They dodged burning out – and if this tour is any indication, they’re not fading away any time soon, either.

For more on Guns N’ Roses including the current tour, click here

You Can’t Put Your Arms Around A Memory (Johnny Thunders) /

The Seeker (The Who cover)

One thought on “Guns N’ Roses – Yes, In This Lifetime And Live At Chicago’s Soldier Field”