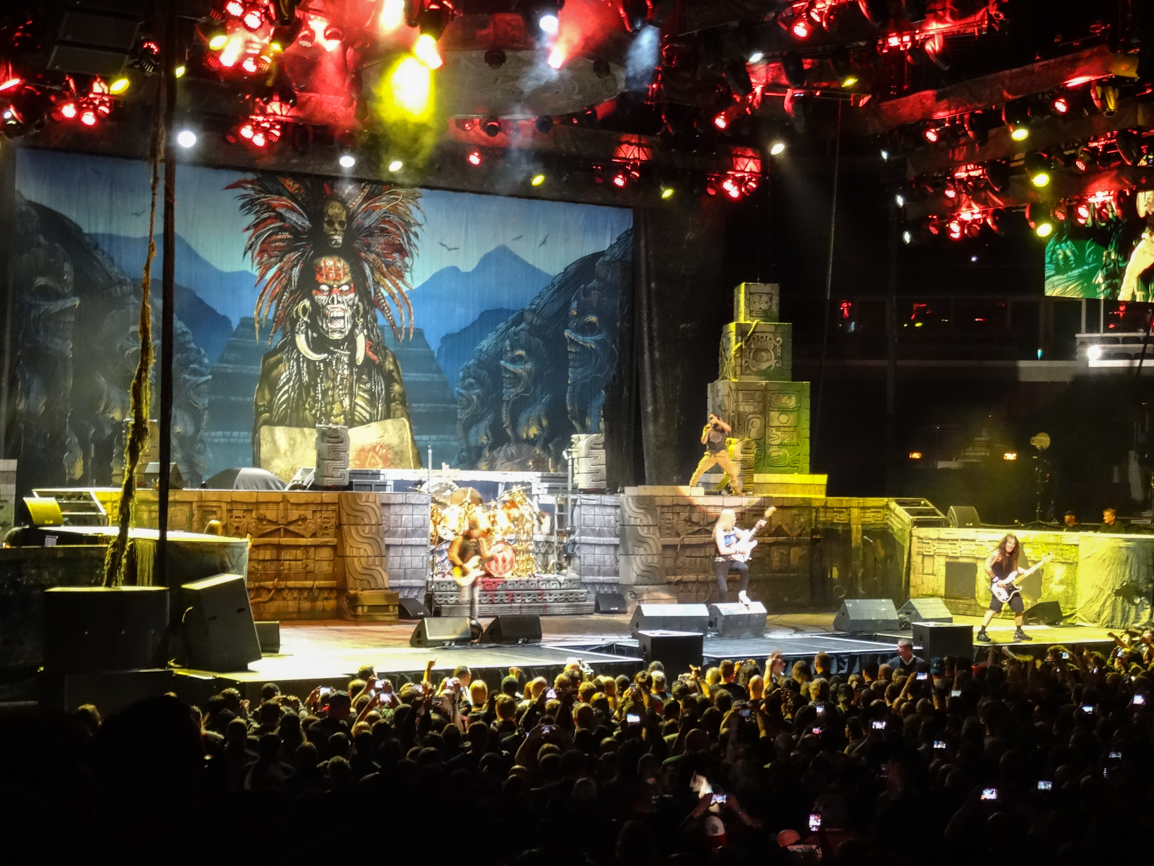 There are not many bands that can play together as long as Iron Maiden and still pack venues the size of United Center, but Iron Maiden prove positive they are still as relevant today as they were 10, 20, 30 and ever 40 years ago.

English rockers, Iron Maiden have been a gigging band since 1976. That’s right, 40 years of Maiden. As a matter of fact, we’re just shy of 40 years exactly. It all started in May of 1976 in a small pub called Cart and Horses Pub in Maryland Point, Stratford, just outside London. Gone are the days of multicolor spandex and leather studded arm bands, but that doesn’t make them any less metal. Today, all these decades later, they are still playing live just more refined and there are no signs of that stopping anytime soon.

United Center was the latest stop for the bands current tour, The Book Of Souls Tour 2016. This one is in support of their latest release of the same title, The Book of Souls. If you didn’t know, the UC holds around 25,000 people for concert and this night was at capacity. A pretty impressive feet to pull off these days by any band, let alone a UK based Heavy Metal band.

The house completely filled up just before Iron Maiden took stage. The song, “Doctor Doctor” by another UK rock band ramped up on the PA just before the lights and band exploded on stage. They played 15 songs this night covering their entire history from beginning to most current release.

Maiden have always been know for impressive live show. This one didn’t disappoint. For this tour, we see a stone carved, crumbling wall that surrounds the band and backdrop that looks like a jungle scene. Like they’re playing on the preserved sacred grounds. Their set quality is Hollywood style props. This isn’t some cheap, Halloween store or college production, it’s a full scale Universal production that resembles a Hollywood backlot. It’s complete with giant roots hanging from the truss and lighting rigs as well as strewn throughout the stage floor. Smoke pits fill the stage from time to time as well as an intricate lighting display. It could easily be a set from Indiana Jones. The way the band took control of the stage, it at times resembled a live action version of Pitfall. Lighted head stones adorn shaking pillars and even an smoky alter rises behind the drummer center stage rear. And lets not forget about Eddie. The bands mascot and fan favorite since the beginning of course makes an appearance. This tour we see a new and improved Eddie as a 9 foot tall walking tribal zombie creature.

“If Eternity Should Fail” started the night off just as it does on The Book of Souls. Lead singer Bruce Dickinson ran out like a madman. He bounced around the giant Mayan ruin stage like a trooper on a mission. He gets the crowd pumped throughout the show. Constant interaction with the fans through short stories, jokes, call outs to people in the front row and getting the entire house to sing along with and cheer their songs in unison.

From time to time, Dickinson pauses between songs make comments. At one point calling out all the fans and flags from around the world that were there. He said, “For being in the middle of America, we have a pretty fucking international bunch here tonight right? When Maiden fans come together, we don’t care what color or creed you are, we just get along. It’s just about the fucking music.” At which the crowd whole heartedly agreeing cheering back with great fervor.

Another story Dickinson gave was about empires. He said, “Empires come and empires go. You see it all the time on CNN. No matter what, things will change. Nothing and especially no power has lasted for ever. What comes up, must come down. There has never, ever, ever been a society that has survived for any great length of time. You better make sure you make some friends on the way up because you are for sure going to need them on the backside.” He then intro’d the song they wrote about that very sentiment, “Book of Souls”, about the great Mayan civilization that after years of influence and control disappeared.

The drummer, Nicko McBrain, is nestled behind a golden fortress of solitude drum kit. You can’t even see him unless he stand up and waves at the crowd which he did on occasion letting us know there is someone back there driving that sonic force.

Steve Harris is the original bass player since the beginning. He moves around just as well as the rest slapping the shit out of that bass guitar like it did something very bad.

Another original line up member, Dave Murray is one of their three guitarist and song writers. He too acts as if no time has passed and grins along with every song, making eye contact with fans near and far. You can tell he still loves doing what he does. It’s not just a pay check. This is his passion. Something he looks forward to each night.

Adrian Smith takes part of the lead guitar roll. A member since 1982, has been a staple almost as much as their mascot, Eddie. His fluid leads and incredible harmonizing but shredding riffs with Murray and Jancik Gers (the “new guy” in the band – since 1990) who danced around like an aerobics instructor on speed. This group is a band of brothers that has lasted throughout the ages in one form or another and seems to just get closer and better with each year.

Iron Maiden live is a rock show, of rock shows. They don’t disappoint. They constantly prove why they are legends. They are a legacy band from a time when Metal ruled the world but still pack the house to this day. They are tight and professional but loosely fun. It’s not only great music, but a theatre performance. Bands like this are rare. The talent alone with these six individuals is incredible, but when you add in the showman ship, crowd interactions, theatrics and stage presence, you’re guaranteed not only your money’s worth, but a night to remember.

After almost two hours of shakin’ the center, Iron Maiden closes the night with another classic, Wasted Years. The band always gracious, thanks the fans and Chicago for coming out. They liter the audience with personal trinkets like drum heads, drum sticks, guitar picks and even one lucky fan caught Eddies ripped out beating and bloody heart that Dickinson pulled earlier in the show.

Maiden fans are not just loyal fans, they are fanatics. They sing every song word for word. They attend every tour the band does.  They get along with each other like old friends. No fighting just pint raising bar tunes sung at the top of their voices.

So how do they keep doing it, remain relevant and cool? From what I’ve seen, it’s the band themselves gelling with the fans around the world. They both work together keeping Eddie alive. You can tell Iron Maiden loves doing what they do in every show. They give 110%. They make it fun not only for the fans, but themselves. Just watch the interactions between the band on stage and the fans out front. It’s an live action rock n roll opera! I mean, how can you not give respect to a band who’s lead signer fly’s them around in their own jet airliner dubbed “Ed Force One”?! They live for the road and it shows every night.

Record Store Day Not Only Alive, But Thriving Alert! Double Door Still In Danger! Sign The Petition To Help Save It!