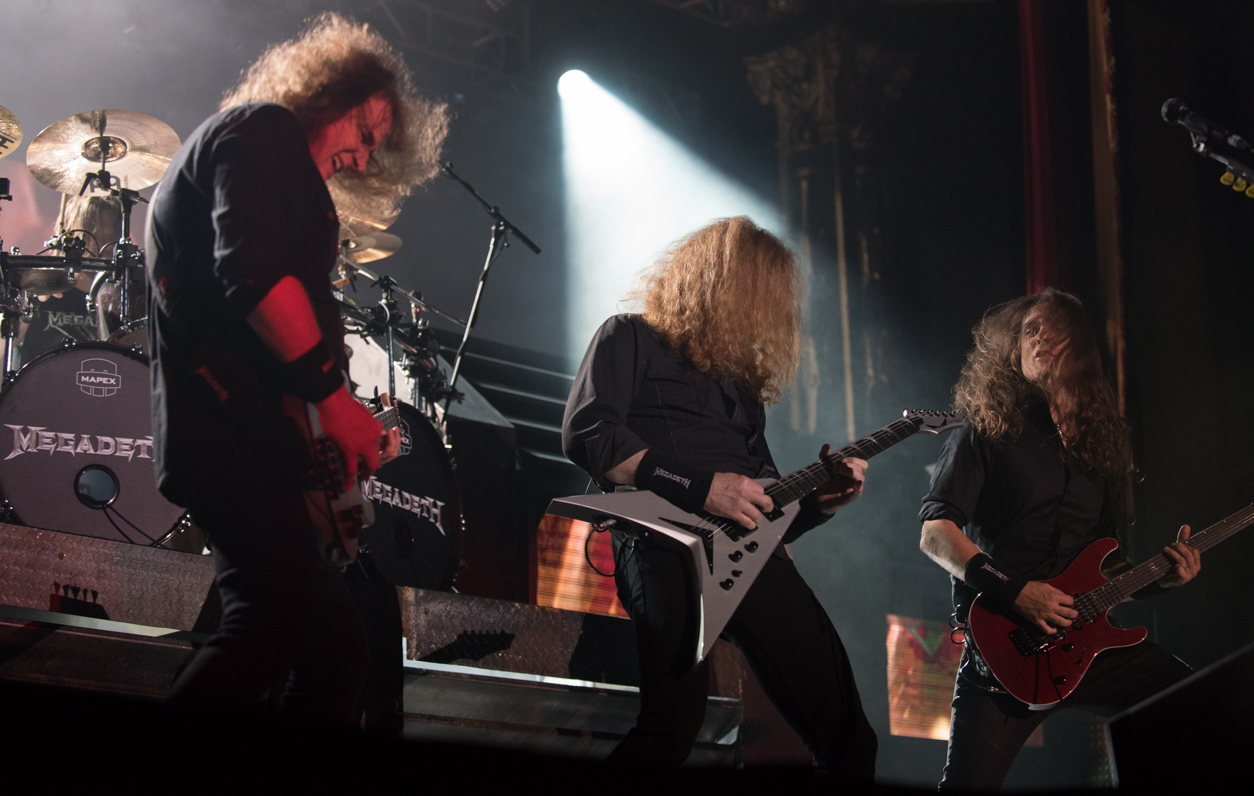 Megadeth are at a tipping point, along with the rest of the “Big Four” – namely, Metallica, Slayer, and Anthrax.   In the last six or so months, Slayer and Anthrax have released arguably some of the best albums of their entire career, and Metallica are set to ride a series of stunning reissues into a new record later this year.

Megadeth followed suit. Dystopia, (Billboard chart topping #1 Rock and Hard Rock Record) 2016’s stunning vision of a science-fiction entrenched, politically-horrifying view of America’s future (always Megadeth’s forte, but never as relevant as it is now), is one of their crowning achievements as a band; it’s perhaps their best record since 1990’s Rust in Peace, though 2010’s Endgame was one hell of an overlooked contender. (If you don’t believe me, go listen to the main riff in ‘1,320,’ a tune frequently played on the now-legendary “Big Four” tour of 2010-11. You’re welcome. I digress.) Put simply, founder/vocalist/guitarist Dave Mustaine, longtime bassist/collaborator Dave Ellefson, and their new lineup (which includes newcomer Kiko Loureiro and Lamb of God drummer Chris Adler) arrived in Chicago to kick ass and take names in support of their new record. And they must have gone back on the road with a long list of names.

The 90-minute set focused on all of Megadeth’s strengths, from thrash classics like “Wake Up Dead” and encore “Holy Wars” (arguably the best example of the band’s power in their entire career) to opener “Hangar 18” and all-time catalog hallmark “In My Darkest Hour,” alongside new tracks like “The Threat is Real” and “Fatal Illusion.”

The stage-set was a towering achievement: a bank of video-screens that resembled a futuristic machine, blasting images of terrorism, 24-hour propaganda (or ‘news,’ as some prefer to call it), and random imagery designed to wax the senses in equal measures with the now classic riffs of tunes like “Peace Sells” and “Tornado of Souls,” both crowd favorites. If anything, mid-90s radio-friendly fare like “Trust” and “Sweating Bullets” felt tired; Mustaine would do well to consider his thrash roots as his peers have and to revisit forgotten material from Peace Sells and even the often-ignored So Far, So Good, So What to maintain the set’s pacing – Megadeth have a deep enough discography at this point to avoid relying on the easy choices from arguably their most accessible – but forgettable – period. At times, the hooky quality of the mid-90s material felt lackluster compared to the violently timely riffs of tunes like “Dystopia” and “Poison Was the Cure.”

In the end, Megadeth’s current tour and record re-establish why they, among so many other contenders, remain one of thrash metal’s classic “Big Four.”

The Threat is Real

In My Darkest Hour

Poison Was the Cure

For photos from the Chicago Aragon Ballroom show, click here