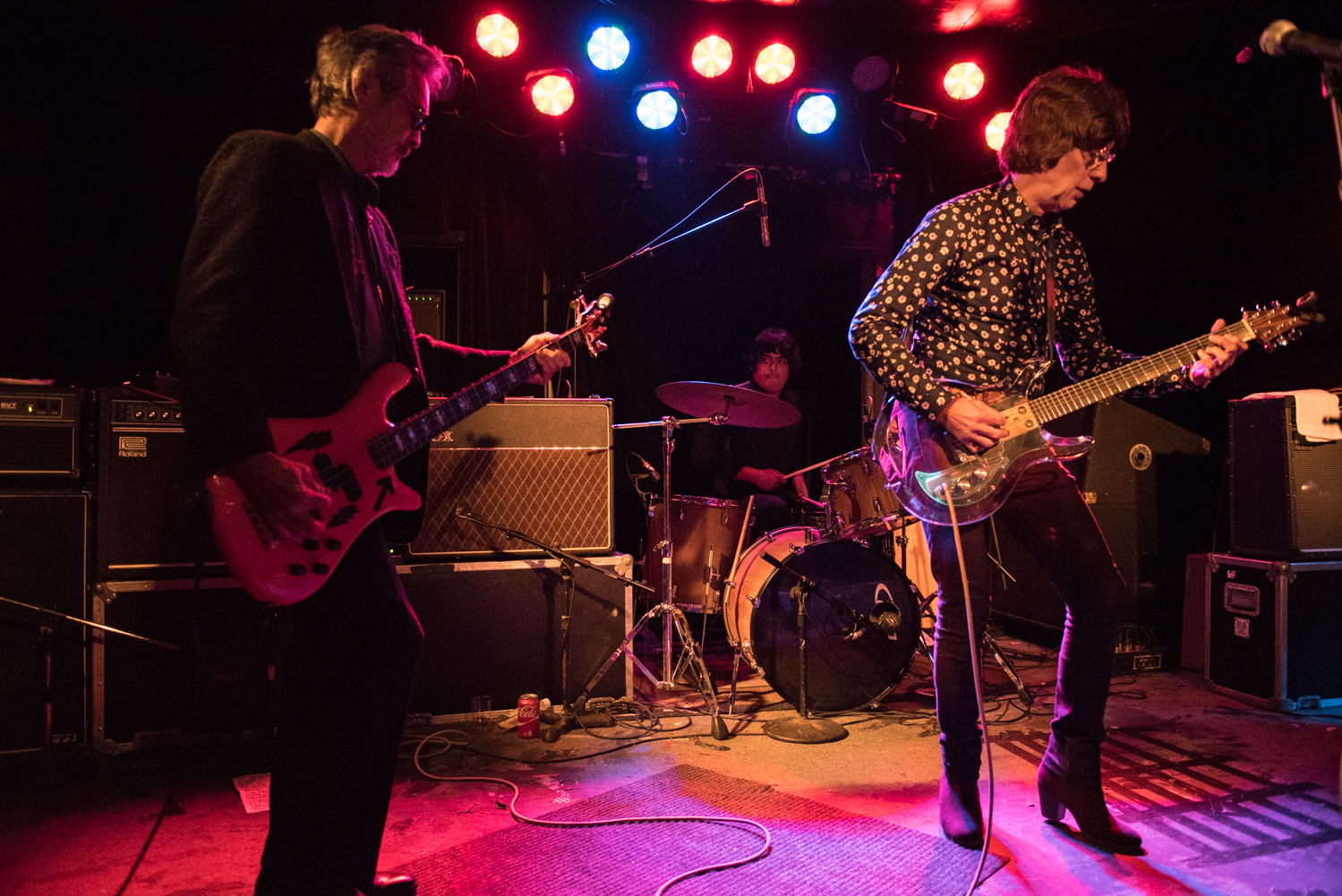 Very few genres shake my action more than power-pop, so Thursday’s bill at Beat Kitchen was a blast from start to finish, starting out local and finishing with a legend.

First on the bill was Chicago-based quintet Mooner, who describe their sound as “power-pop for the 21st century,” which makes sense, as the roots of Mooner’s sound reside somewhere between Tom Petty and Wilco, with a healthy nod toward Cheap Trick (covered mid-set, in fact). But the band often eschews predictable arrangements, and that adds a flavor that’s tough to copy or pin down to one specific style.   Mooner’s debut album “Masterpiece,” released in October, is a solid ride from top to bottom, and you’d do well to check it out. While Chicago has a lot of great bands, there aren’t as many who seem naturally ready for a wider audience. Mooner does, so let’s hope that their recent midwestern tour was the first of many.

Next up was Milwaukee singer-songwriter Trapper Schoepp and his band. Trapper’s lanky, mop-haired stance onstage calls to mind, at times, the great Will Sheff, and Schoepp comes across as the kind of effortless songwriter who could probably turn out a great hook in his sleep. The band ended the set with a sledgehammer cover from San Francisco’s Sister Double Happiness called “Freight Train,” and when an audience member was brought up to play bass while Tanner (Schoepp’s brother) took over lead vocals, the night really got going. Schoepp’s songs have a narrative quality that echoes a classic folk-rock perspective, and the set-closer proved that the four-piece has the goods to deliver both thoughtful folk-style tunes as well as killer rock ala MC5 or the Stooges.

But the night belonged to San Francisco.

In the long and storied chronicles of rock n’ roll, there are successes and there are near-misses, and The Flamin’ Groovies really fall into both categories. I say that with love: success because, in light of their 2013 reunion, they have a longevity and position as one of the most enduring and endearing power-pop bands from the 1960s, and near-miss because there is no good reason why songs like “Shake Some Action” (though certainly recognized and loved by many), “You Tore Me Down,” and “I Can’t Hide” aren’t right there on every music-lover’s shelf next to the Beatles and the Stones. Though as guitarist Cyril Jordan noted, the people who have been most into their music over the years have been hardcore music fans, record store owners, and the like. (“Which means we get a lot of free records when we come to town, so that’s actually pretty cool,” he noted with a grin.)

The Groovies took the stage to a wildly enthusiastic crowd that spanned a wide demographic and age range, and cranked through a 90-minute set that was as fun as it was fresh; Jordan and Chris Wilson’s harmonies are still a rich piece of ear candy, and on harder rockers like “Tallahassee Lassie” and NRBQ’s “I Want You Bad,” the band added a crunch to the blues-based rhythms that sounded massive in the Beat Kitchen’s intimate space. Drummer Victor Penalosa drives this newest incarnation of the band with a youthful ferocity while staying true to the classic pop structures, and bassist George Alexander may have just been the coolest one in the room, strutting about the stage and laying a thick, flawless foundation for Jordan and Wilson’s twin guitar work. The end of the night was all about the hits: “Shake Some Action,” “Slow Death,” “Teenage Head,” and an impromptu cover of “Jumpin’ Jack Flash,” by audience demand that brought the house down.

And man, do they have stories. Jordan noted one occasion on an Australian tour in which he was given codeine for the first time, and Wilson’s witty commentary throughout the night kept the audience amused in between songs. And, amidst the banter came a revelation: a brand-new Flamin’ Groovies album is on the way in 2016, with a Record Store Day single coming in just two weeks, people.   This is serious business.

In the meantime, if The Flamin’ Groovies are one of those bands from pop’s greatest era that somehow got by you…well, you have until 2016 to catch up so you can see them when they come back through town, now, don’t you?

For More info on The Flamin Groovies: Click Here

You Tore Me Down

I Want You Bad

Don’t You Lie to Me