Grace Potter Shows Off Her Versatility At The Chicago Theatre 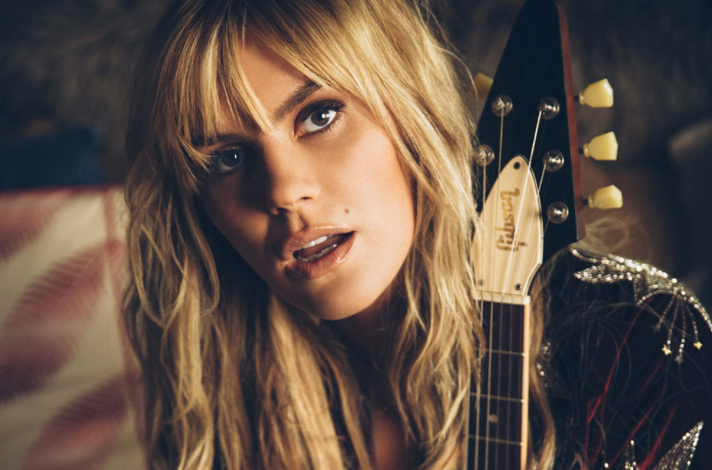 When it comes to the greatest, most versatile showmen and women of rock n’ roll, there are precious few left; most have left us.  Prince comes to mind as someone who blends styles, instruments, and genres to create a world that is entirely his own; David Bowie is another.  And at the Chicago Theatre on Friday night, Grace Potter made it clear that her hat belongs in that ring.

Potter (touring on her new solo record Midnight) and her phenomenal six-piece band proved mesmerizing at every turn.  The setlist was an excellent balance of punchy rockers like “Look What We’ve Become” and longer, extended versions of tunes like “The Loneliest Soul” and set-closer “Medicine” that showcased the band.  Some of the arrangements saw a bit of a facelift as well, with a more rocking approach to 2007’s “Ah Mary” and a drums-guitar arrangement that saw Potter channeling her inner White-Stripes on the typically acapella “Nothing But the Water.”  Potter’s versatility was the key to the night, moving from blues-based crunch to the radio-friendly pop beats of new songs like “Hot to the Touch” and “Your Girl” (which called to mind a Controversy-era Prince as much live as it does on record).

Onstage, Potter is a grinning, whirling dervish of energy, spending nearly the entire set dancing and vamping when she wasn’t tearing a hole in her signature gold-finish Flying V, particularly on  the title track from 2012’s The Lion, The Beast, The Beat and show opener “Never Go Back.”  It’s rare to see someone so unabashedly enjoy themselves onstage, and her joy is infectious, weaving its way through the crowd from start to finish.  A theatre like the Chicago often begs a certain degree of decorum, but Potter wasn’t having it.  “You guys just got so quiet,” she remarked at one mid-set point while switching out guitars. “I grew up playing bars where if it got quiet, there was something very wrong.”  The crowd, spanning a wide age demographic, was happy to oblige her requests for rowdiness the rest of the night.

Introducing “Low Road” from her 2010 record with the Nocturnals, Potter regarded the packed theater, noting, “I know that some of you came here tonight thinking that maybe you’d get to sit down.  You can sit down whenever you want, but you can’t get mad if there are people standing up in front of you.  Do we have a deal?”  Indeed, it’s a rare sight when an entire theater is on its feet almost from start to finish as this crowd was, and by the end of the set, Potter could no longer contain herself, calling for everyone to come down out of the “cheap seats” to dance in front of the stage.

For an encore, a lush duet of “Apologies” with opener Raymond Baxter got things started before nailing the audience right between the eyes with “Lion” and her most-beloved single, “Paris (Ooh La La)” to end the night.  And as the band took a bow, no one in the house could have walked away thinking that they’d seen anything shy of a born performer.

Nobody’s Born With A Broken Heart

Nothing But the River (I)

Hot to the Touch

The Lion, The Beast, The Beat