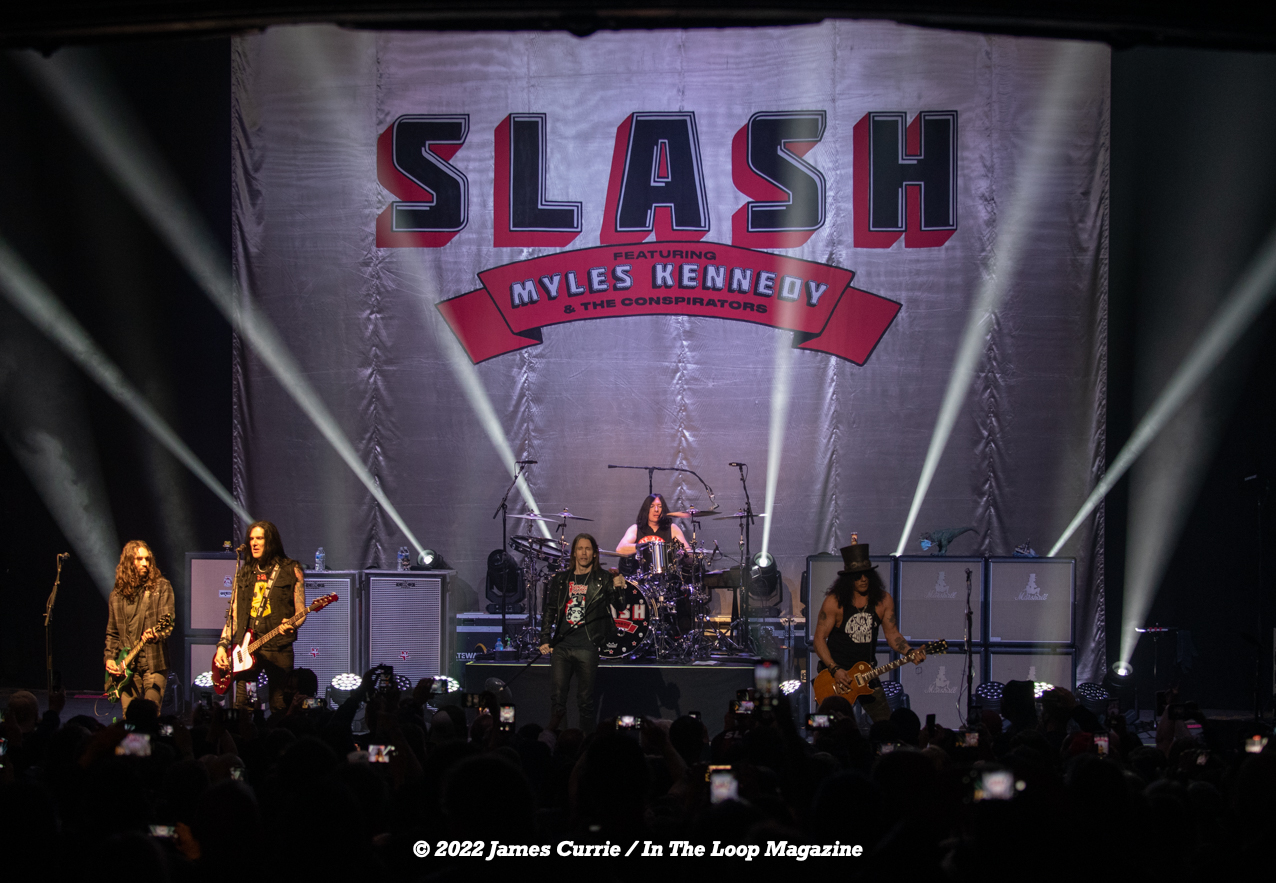 Supergroups will never cease to entertain the masses. It’s not cliche or passé. It’s a right of the rock n roll royalty passing. Fan and bands alike clamor for them and as last night at the Riviera Theatre in Chicago proved, Slash featuring Myles Kennedy and the Conspirators is no exception. The house was packed more than any show I’ve seen since the pandemic began and clubs opened up again.

Slash, dressed in this trademark gear that includes top hat, sleeveless black t-shirt, black aviator sunglasses and wielding his Gibson axe took stage left in front of his custom made, chrome trucker mudflap nudes on Marshall stacks. Always a showman, commanded his guitar stance and legendary licks next to a band that matches his intensity and talent. Slash played a more bluesy sound tonight within the rock mix of tracks spaced throughout the set never failing to reach any fans expectations.

Myles Kennedy is perhaps the perfect front man for a rock band. His presence is formidable for sure, but his swagger is laid back. Kennedy rocking a local Chicago favorite shirt from the Svengoolie show, belted out classics and new tracks fans have been waiting to hear live. Some following from city to city to hear the releases as they happen.

The backing band is much more than just that. It’s compiled with rock legends in their own right starting with a damn good bass player Todd Dammit Kerns. Kerns has been playing in his own band for year as well as backing others in support. Tonight, he stepped up and took lead vocals on a couple tracks including a song Slash wrote with Lenny Kravitz, “Always On The Run”. Brent Fit has been bangin’ drums since way back and Frank Sidoris lends his talents not only on guitar, but vocals as well. Together, they make a modern supergroup rivaled by none.

This tour, “The River Is Rising Tour 2022, marks Slash and Myles Kennedy’s 4th time collaborating. They’ve become pretty regular at getting together. As the new album title suggest with “4”.

There were some huge songs played in this mid sized venue that turned Chicago’s Uptown neighborhood into LA’s Hollywood Strip for a night. But it was a cover of Elton John’s, “Rocket Man” that was the clear front runner of fan favorites during this gathering. As many sang along with the track the band recorded for the Disney Film “Stuntman”. Kennedy’s voice really stood out here and projected his range for all to admire.

Tonight was a rock show of rock shows. SMKC was lit. The fans were eager for a release from the woes of current society conditions. Sadly the swell came to a head after an amazing guitar solo by Slash and last song played. This show was over, but the energy will live on much longer after we exit the door.

For more on Slash Featuring Myles Kennedy and the Conspirators, click here