Deadmau5 Rolls Out CUBE V3 Tour At Navy Pier, Rocks The House To Its Core, Literally 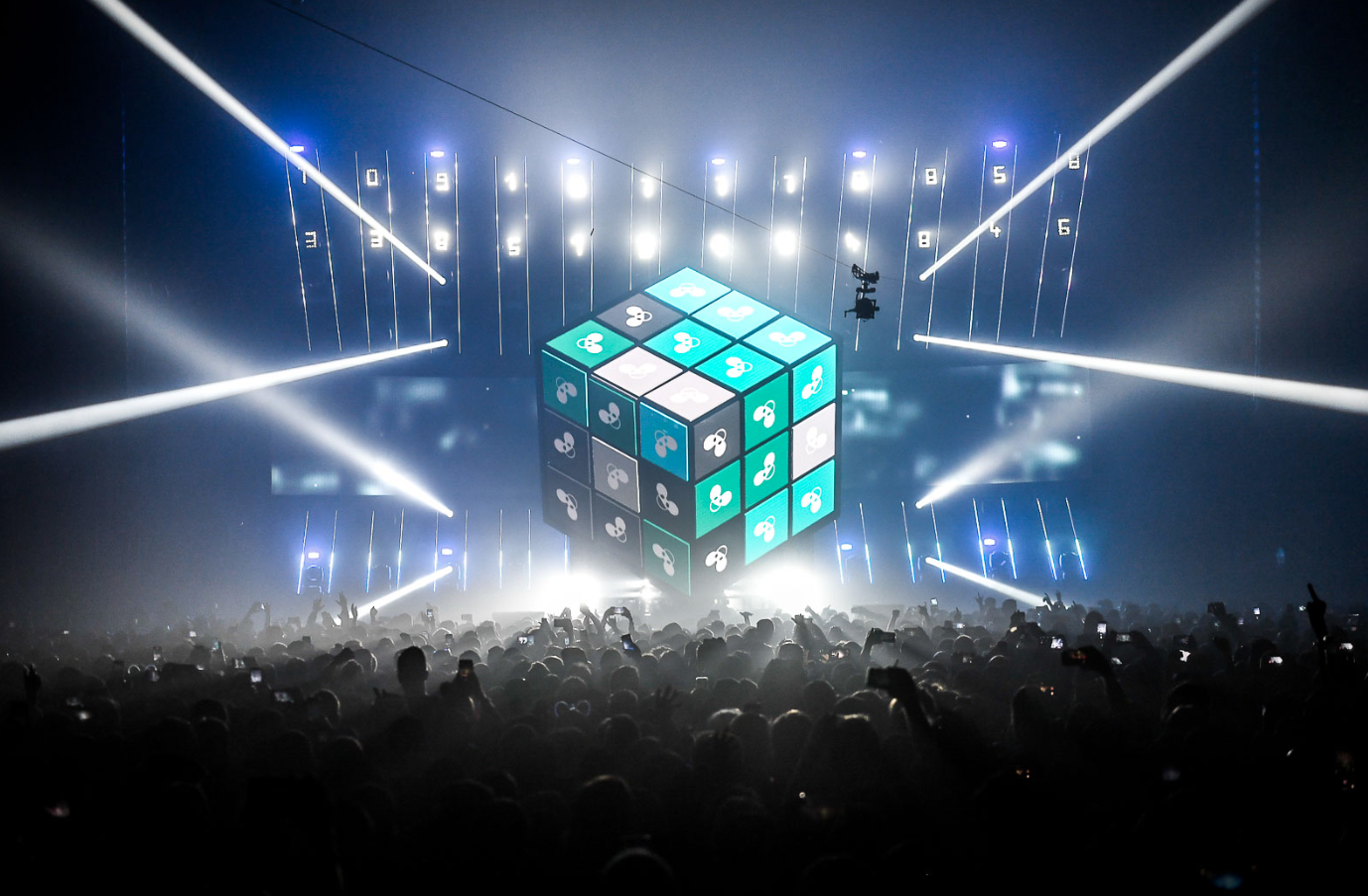 Joel Zimmerman (aka deadmau5) rolls out another sophisticated version of his cube: this one dubbed “CUBE V3”, which in all intent and purposes, blows away the original versions of said cubes.
It’s another behemoth- more gigantic and sophisticated LED panels with crisp visuals, still massive in height, and for this version of the Cube, deadmau5 is perched behind the cube, not on top as past versions. And it revolves, both clockwise, and counter clockwise, for the occasional big reveals of the electronic DJ and producer, with his trademark mouse ears, and also just his plain normal self, depending on the song and his mood.
The extraordinary sound system in place for this production also leaves you quite shaken and stirred, I can tell you personally.
First off, the venue: Navy Pier’s Festival Hall, a deceivingly large festival space towards the east end of Navy Pier, with a cool beamed arched ceiling at a height of 60 feet, and more than enough width to accommodate the production of CUBE V3.
Apparently to create this mega production and all its sophisticated elements- a lot, I mean A Lot of code is involved.
It’s an audiovisual spectacle that took eight months and thousands of hours in the making and creation, involving plenty of designers and coders from his native Toronto, and plenty of brainstorming, which when you think of it- costs mega dollars.
From what I’ve read, and from what people in the know with EDM productions told me: we have state of the art IDE tools involved, GPU systems, data handling digitalization suites, TouchDesigner- (also based out of Toronto), and millions of lines of code that all encompasses this new version of the CUBE.
From where I was perched to photograph the show, directly behind the soundboard on an elevated platform, I counted at any given time more than five production people, all handling at any given moment the lighting, the sound, the assistants assisting in cueing up visuals and such.
It’s a mighty production, requiring forward thinkers and tech experts to pull this off without a glitch.
This is not playback technology of any sort, like most top tier EDM artists.
Joel Zimmerman is way ahead of the curve on this, brainstorming on ways to constantly out do himself.
Most EDM artists have pre made imagery at their disposal, with endless cycles of repeat graphics, done in a loop.
Not so with deadmau5.
With the brilliant CUBE V3, Joel can cue up at a moment’s notice all his visuals in real time, leaving enough space for spontaneity in his sets, basically ensuring that no two sets and performance are alike.
So to cut to the chase: this a performance that’s meant to blow your mind, whether you’re a tech hound or not, whether you’re a regular EDM club goer or not, or simply a regular concertgoer or not.
And the buildup in this setlist, from opener “No Problem”, with major thump and wallop intact, into “Infra Turbo Pigcart Racer”, which had the feel at times of racing Nascar down its gut, into “Suckfest9001”.
At this point in the show, I was rattled like none other.
I was stationed behind the soundboard on an elevated platform with no cushioning whatsoever to counter the massive subwoofers and chest thumping low end.
All my gear on this platform riser let loose out of the bag and rolled around the floor. My whole body shook constantly, like in a 6.7 earthquake or higher.
I was relegated to this position because of the last minute instructions from Joel’s road manager, instructing us photographers that we were not allowed to shoot in the pit.
So last minute- what to do – where to go? The place was packed from wall to wall, over 12,500 total I was told, all on the main floor.
There was a VIP section along the main wall, 25 feet up, but the obstructions from pillars and and long arm floor video rigs on the main floor was just too limited for photography, and the occasional spot on view of the CUBE.
So down to the back of the main floor I went, with floor and vibration shocks rattling everything in sight.
I believe I was somewhat successful in covering this latest production of Deadmau5 and his CUBE V3, hoping to justice for a production worthy of a photographer up for the challenge.
Overcome obstacles, I say, or attempt to do.
This latest version on his Cube represents the further vision of Joel Zimmerman, executed expertly, with a team he’s surrounded himself with that know their shit inside and out.
As far as fan approval- the whole main floor was going apeshit, dancing in place, arms raised to the heavens. and sometimes like me from my vantage point, looking stunned, and saying “what the fuck are we witnessing?”
Normal EDM trends be damned when it comes to deadmau5.
This is ambitious as ambitious gets.
The show is rarely dull and mundane, even in the “take a breather”  slow points.
Nothing ordinary here at all, even when longtime collaborator (and fellow Canadian) Lights hits the stage to accompany Joel for the iconic song “Raise Your Weapon”.
So as you’re finding out in this review, the full catalog of deadmau5 is on display, with the occasional interaction of Joel with his devoted audience when the cube turns around to expose the musician.
It’s a unique interaction between audience and artist, with a visually dazzling show that at times is escapist, at times revealing and trance inducing and experiential.
This is a mega production from deadmau5 you won’t soon forget.

For photos from the Navy Pier show, click here