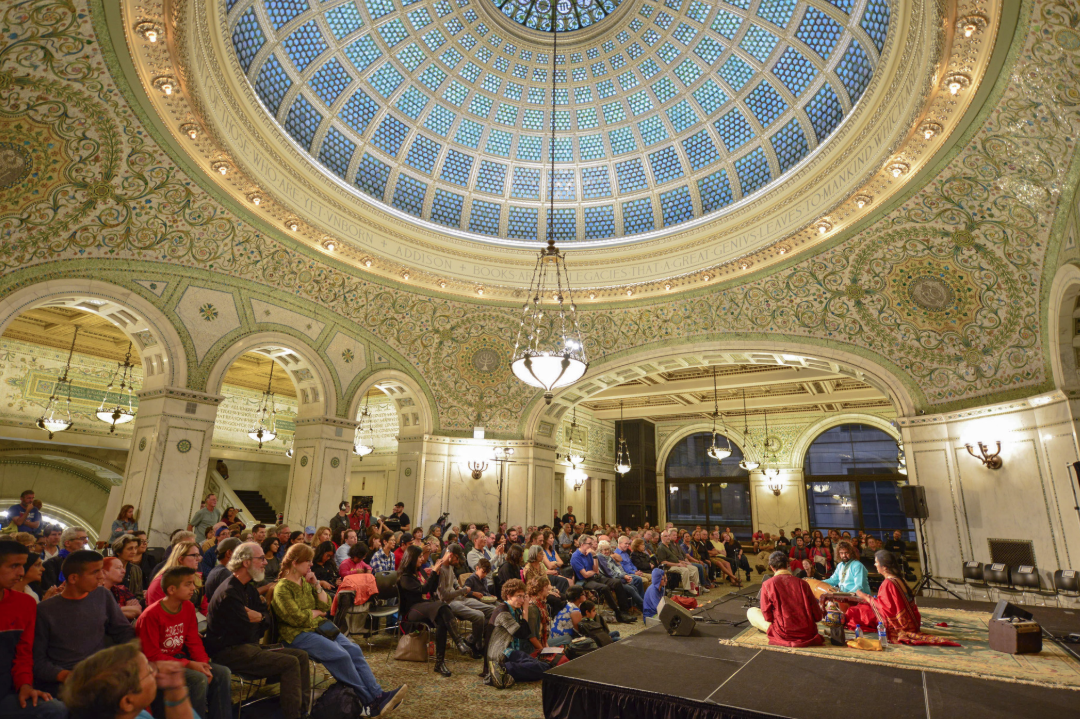 Performances at 17 venues across the city include the all-night Ragamala at the Chicago Cultural Center, ¡SÚBELO! – A Celebration of Pan Latin Music and Culture in Millennium Park, the Global Peace Picnic in Humboldt Park and World Music Festival meets the World Dumpling Fest at Navy Pier and much more

The world will come together for the 21ST Annual World Music Festival Chicago at 17 venues across the city from September 13 to 29. Celebrating diverse music from across the globe, this FREE festival is produced by the Chicago Department of Cultural Affairs and Special Events (DCASE) and is the largest festival of its kind in the United States. The full schedule can be found at worldmusicfestivalchicago.org

World Music Festival Chicago opens Friday, September 13, with Ragamala: A Celebration of Indian Classical Music an overnight concert starting at 6 p.m. through 8 a.m. on Saturday. A tradition in India, ragas (traditional scales or modes) are all-night classical concerts seldom held publicly in the United States. This is a rare opportunity for visitors to experience ragas as they are meant to be heard – during early morning and late-night, under the Tiffany stained-glass dome of Preston Bradley Hall at the Chicago Cultural Center (78 E. Washington St.). Presented in collaboration with Indian Classical Music Society of Chicago and People of Rhythm, performances will feature Hindustani and Carnatic music.

¡SÚBELO! – A Celebration of Pan Latin Music and Culture starts at 3 pm on Saturday, September 14 in Millennium Park. ¡Súbelo! (turn it up) features headliner, Pirulo y La Tribu from Puerto Rico, combining Nuyorican salsa, Afro-Cuban son and Puerto Rican bomba for a classic meets modern 21st century salsa and timba; Centavrvs, whose “electronica regional Mexicana” has made them one of the most popular indie bands from Mexico City; and Los Wembler’s de Iquitos, cumbia pioneers from Iquitos, Peru, the capital of the Amazon.

The Global Peace Picnic on Sunday, September 22, will commemorate International Peace Day at theHumboldt Park Boathouse (1301 N. Sacramento Ave.) from 2 to 6 p.m. This day of family-friendly activities and music will feature The Garifuna Collective from Belize and Central America; KOKOKO! from the Democratic Republic of Congo; and master ‘sonero’ salsa singer Hermán Olivera from Newark, New Jersey, joined by an 11-piece band of top Chicago salsa talent convened by Segundo Ruiz Belvis, led by Nathan Rodríguez on percussion and Edwin Sánchez on piano.

Making their World Music Festival debut from Bali, Indonesia, Gamelan Çudamani takes the stage at 6 pm on Friday, September 27, at the Joan W. and Irving B. Harris Theater for Music and Dance (205 E. Randolph St.). One of Bali’s most active and respected ensembles, Gamelan Çudamani has been based in the village of Pengosekan near Ubud, Bali, for over 20 years. The group performs a diverse repertoire of music and dance with astonishing technical precision, high collective spirit, and artistic nuance, staying true to their name Çudamani – meaning “focus with your whole heart.

The 2019 Festival ends on Sunday, September 29, with World Music Festival meets World Dumpling Fest at the Polk Brothers Fountain and Performance Lawn at Navy Pier (600 E. Grand Ave). This collaboration among Navy Pier, the Chicago Cultural Alliance and DCASE is from noon to 7 p.m. and includes Fidel Nadal featuring Mr. Pauer from Argentina and Venezuela, Alsarah & The Nubatones from Sudan and New York City and Chicago’s own LowDown Brass Band. Attendees will also be able to purchase dumplings from 20 neighborhood-based ethnic restaurants in the Chicago region including pierogis from Kasia’s Deli, bao and sui mai from Chinese Friendship Restaurant, coxinha de galinha and bolinho de aipim from Sinha Elegant Brazilian Cuisine & Catering and more! This all-ages event is a day of celebration of our region and world culture you won’t want to miss. For complete details, visit chicagoculturalalliance.org/alliance-programs/world-dumpling-fest.

The full schedule with locations and times of each performance is included below. For more information and festival updates, visit worldmusicfestivalchicago.org and follow the festival on Facebook and Twitter @WMFChicago #WorldMusicFestivalChicago.

***NOTE – unless otherwise noted, all lineups are listed with the headliner first followed by the opening performers

¡SÚBELO! – A Celebration of Pan Latin Music and Culture

Harris Theater for Music and Dance

Tickets are required for entry at HarrisTheaterChicago.org and reservations are encouraged. Walk-up will also be available on a first come, first served basis.