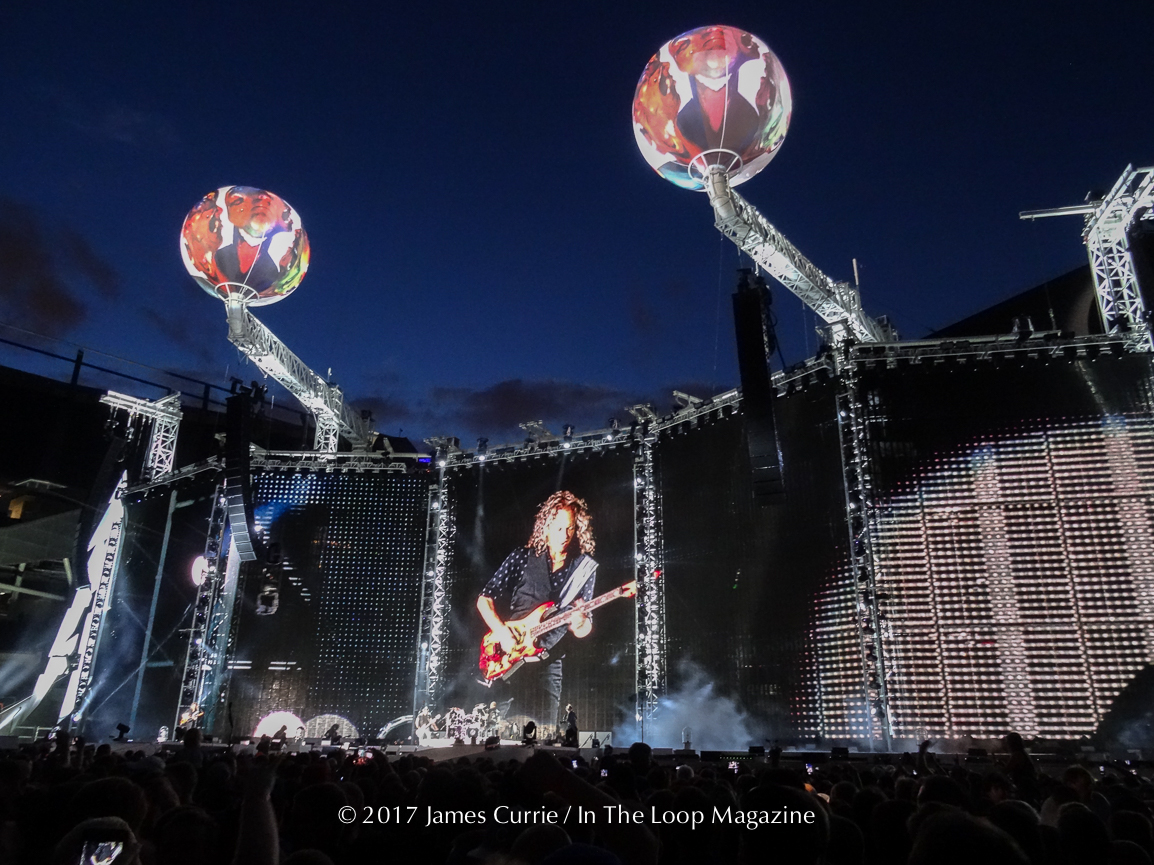 In terms of musical history, there are few bands that belong to the foundation of each genre. And when it comes to heavy metal – specifically, thrash metal – Metallica is one of the “Big Four” (including Slayer, Megadeth, and Anthrax) that define the genre they helped to start in the early 1980s. Granted, we’re a long way from the early 1980s. But at Soldier Field on Sunday, Metallica delivered a set that – in a way that might seem strange to the old-school fans – appealed to just about every rock fan and confirmed why they’re one of the biggest bands in history.

Opening with a one-two punch of “Hardwired” and “Atlas, Rise,” both from last year’s Hardwired…to Self-Destruct, a massive stage framing the classic Metallica logo featured fireworks and explosives as the four-piece—guitarist/vocalist James Hatfield, guitarist Kirk Hammett, bassist Robert Trujillo, and drummer Lars Ulrich—burned through a set of old and new with a fury that few bands could hope to possess over the course of two hours.

The history of Metallica is complicated, as it is with any band that strives to reach beyond the boundaries of where it started. ‘Thrash metal’ as it came to be known in the early to mid-1980s was a new concept; the idea of a band now 35 years into its career as progenitors of a genre tends to be lost on a crowd of sixty-thousand who want to hear songs they know as heavy-rotators on hard and classic rock radio. As a result, die-hards want to hear bruisers from the early days, and newer fans want to hear…well, songs they know, even if they aren’t familiar with the early records. On that front, Metallica didn’t disappoint. Balancing five new songs (the blistering “Now That We’re Dead” among them, with its crunchy, stop-start riffage) against five hits from 1991’s self-titled “Black” album kept the peace, but if anything, the band didn’t give itself enough credit. Tunes like “Wherever I May Roam” and “The Unforgiven,” while crushing on record, don’t necessarily show off Metallica’s strong suits live, and in many ways, the band is past the point of needing to please everyone – like it or not, they’re a legacy act that can essentially tour at whim and do whatever they want while satisfying the vast majority of the crowd with their stellar, signature bombast.

That bombast was on point during classics like Ride the Lightning’s “Fade to Black” and Self-Destruct’s “Moth Into Flame,” while melodic new tune “Halo On Fire” was perhaps the most brazen example of the band’s connection to an early-80s movement largely known as the “new wave of British heavy metal,” without which virtually no contemporary American metal band would exist (look it up if you’re curious – you won’t regret it).

Hetfield dedicated “Sad But True” to a young fan in the crowd, which called into immediate focus an element of Metallica’s appeal that many ‘lifers’ prefer to ignore: that the band’s audience has expanded to a point where kids are prominent amongst the faithful. This is by no means a detriment; if anything, the band’s playful attitude since the early 1990s has shown that they don’t take themselves too seriously, and their enthusiasm at being a band with enough widespread appeal to have a broad audience is both palpable and, honestly, fun. After all, despite the classically ‘metal’ desolation of their lyrics, Metallica have always been about having a good time, exemplified by the fact that they decamped to the small walkway in the pit for a last-minute foray in “Seek & Destroy,” the arguable anthem of their 1983 debut Kill ‘Em All.

Metallica occupy a unique space in the rock landscape, in that they’re the first of the early-80s speed/thrash metal bands to publicly age under such a microscope of fame after having helped to established a genre that is steeped in youthful brutality and fun-loving angst (their contemporaries have never seen the same kind of critical highs and lows). That was an inevitable role, for someone. While it may be a tough pill to swallow for those who would have preferred the band to have burned out in their younger days, it’s far more valuable to have them remain among us as a signpost for what great hard rock can be – and no one exemplifies that more, now, than the fearsome foursome from the Bay Area. May they reign for years to come as they did in Chicago this past weekend.

For fan cam photos from the show, click here

For Whom the Bell Tolls

Wherever I May Roam