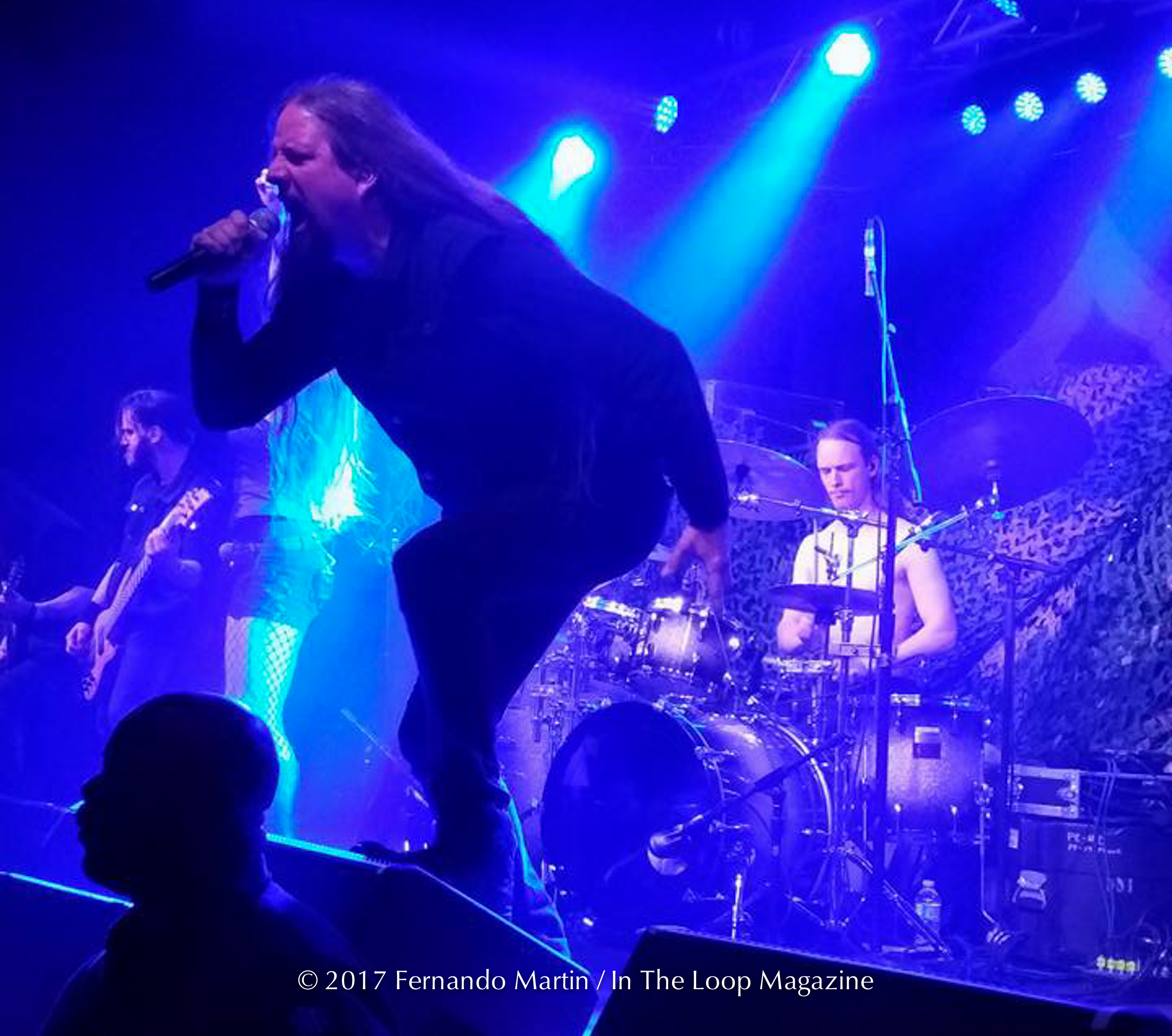 Chicago experienced international metal greatness recently when the Concord Music Hall received acts like Battle Beast, Leaves’ Eyes and of course the epic and glorious Sabaton. Metal hailing from different regions of Europe and Scandinavia, it made for quite a memorable and adrenaline packed night.

In support of their latest power punching album, Bringer of Pain, Finland’s own Battle Beast opened the night in true metal fashion. With lead woman Noora Louhimo, dressed in strikingly metal attire, the group wasted no time in kicking the night off at the Concord in front of hundreds of metal fans. Majority of the tracks were in support of the new album such as the energetic opening track, Straight To The Heart and the title track, Bringer of Pain. The group visited the past one time with their highly popular and very true metal track, Black Ninja. Singer Noora Louhimo got the crowd riled up and excited when she spoke about the ‘metal gods’ which lead straight to the more electronic metal sounding track, Bastard Son of Odin. The entire band seemed to have lots of performance energy and just about headbanged throughout every song. The night ended with the politically oriented single King For A Day and memorable Beyond The Burning Skies. Overall, each track had great energy to it, a wise setlist choice and the band seemed very much grateful and stoked to be here in the US.

With a fast set change, it wasn’t long before we were greeted by metal from Germany/Norway. Symphonic metallers, Leaves’ Eyes, were on tour in support of their last album, King Of Kings. This was the group’s first time in Chicago with new lead woman Elina Siirala. We took a trip into Nordic history with the group’s opening track, Halvdan The Black. He was the father of the first king over Norway, and the theme continued with the tracks, Swords In Rock and Edge Of Steel. There was a slight trip to the past as the fans experienced Hell To The Heavens, a slight throwback track and one of the group’s more popular hits. Lead man/screamer/growler, Alexander Krull, came out in full Viking attire for the next two tracks which included Fires In The North and Sacred Vow. It was very enticing and authentic just to have someone in costume on stage, it really made things intimate and almost true to an era in history metal tends to favor. The group of course had to end things for the night and closed their epic and memorable setlist with Blazing Waters. Lead man, Alexander Krull, got the crowds into all of their tracks, really interacting with the fans and just giving it his all. If you want to experience a great metal front man, make sure to buy your tickets next time the band hits US shores.

Of course majority of the fans were there to experience the glory of the almighty Sabaton. What felt like a long wait, the fans were more than excited to start things, chanting and applauding in awe even before the band was even seen. Before long an instrumental intro kicked things off, creating that suspenseful moment before the headliners kicked things off. A minute later and the band graced the stage and the crowd erupted in cheer and heavy metal horns and the band launched the night with their ever highly popular track, Ghost Division. Highly energetic and headbanger friendly, the majority of the setlist was in support of their latest album, The Last Stand. Even after the opening track, lead man Joakim Brodén, was showing off the goosebumps he was getting on his arms due to the adrenaline and energy the fans were outputting in just the first track alone. The next batch of tracks included, The Art of War, Blood of Bannockburn, Attero Dominatus, The Last Stand and Union.

Still the energy was still high and vibrant and lead man Joakim commented, “What a fucking greeting. Thanks so much guys! I can’t believe you guys are here, all this and on a Monday night!!” He made it clear that for a Monday night, it was awesome to see the fans still wanting more. Sparta, Screaming Eagles and the intimate Carolus Rex. With Sabaton being a war and battle themed band, they decided to make things interesting. As the band put it, “It’s time for a little democracy” in which the next track the band was going to play would either be in English or Swedish, the fans would decide and scream for their preferred language. It was no competition, about three people cheered for the English version of the next track meanwhile the the entire venue screamed for the Swedish version of A Lifetime Of War. No surprise there, the night continued with Resist and Bite, The Lost Battalion and Winged Hussars. The band thanked the crowd and went backstage for the end of the list…or so the fans thought.

An encore was in order of course and so the group continued on with Night Witches, a track dedicated to the female pilots of World War II, Primo Victoria, Shiroyama and the ever adrenaline pumping, 40:1. Unfortunately, all good things must come to an end and so the band closed things off with a track dedicated to the soldiers of wars who endure and deal with PTSD. The track titled, To Hell And Back, seemed like fitting track to end the night on and after one photo with the audience, some guitar picks and drumsticks thrown into the crowd, the epic night had come to a close. If you ever get the chance to see Sabaton live, they may be one of the best bands you’ll ever see in your lifetime and that may be an understatement.