The Fixx, Live at City Winery, Bring Back The Magic and Memories 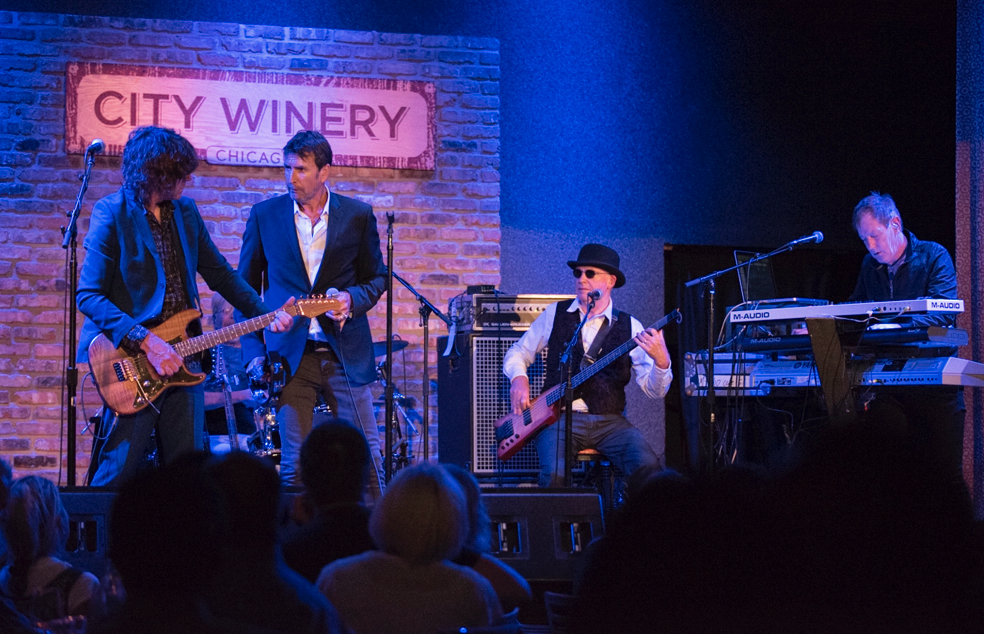 The Fixx are one of those classic 80’s bands that some may only be able to put one song to the name initially, but when you hear a full set live you’ll soon realize they are much more than a one hit wonder band. From the decade that brought us what we’ve come to know as New Wave, The Fixx will have your head nodding and saying, oh yeah, as the memories roll back in.

That was the case for a few folks at the recent headlining show at City Winery here in Chicago. Don’t get me wrong, these people wanted to be there. Not like they were drug out just to drink with a friend who knew every song off, “Reach The Beach”. The Fixx, to many, where simply part of their youth. A band that helped define a generation. A name that when mentioned, evokes joy and a smile back to a carefree time. Once you hear the first song of the night, it all comes back. You’ll remember more than you think and be glad you made it.

The highly animated and charismatic lead singer Cy Curnin and his college friend / bandmate Adam Woods started this Synth Pop group back in the late 70’s in London, England. After a adding a few more members and a name change, The Fixx was born and as we all know ruled the MTV generation.

Jump forward 35 years later and the band is still together, still making new music and still making memories for fans young and old as they tour the globe. This time around, the band is on a 26 US city tour. The Fixx Summer Tour 2016 has delighted fans coast to coast and here in Chicago is no exception.

They opened the dark blue and red lit stage with one that started it all for them, “Red Skies” off their debut album, Shuttered Room (1982). Curnin’s voice still as strong as it was 30+ years ago. The band, which surprisingly consists of nearly all original members, was equally as impressive. Curnin’s mate from school still beats on the drums. Jamie West Oram smooth as ever on the guitar. Rupert Greenall perched on the keys and Dan Brown sporting his iconic squared off bass guitar with no head or body. Tonight he’s also sporting his bolo hat and vest.

The overall sound of the show seemed muted. It’s almost an acoustic set. Not that they are playing actual acoustic instruments, but the volume and temperament were way down. I believe that’s the route most bands that play on this stage and venue take. City Winery is more of a lounge style than a rock club. Whatever it was, it worked. They sounded great. My only request would have been that the keyboards and effects had been louder or more prominent as those really made The Fixx sound.

The show continues with 14 more cuts including an amazing jam during the song, “Fatal Shore”. A song that was originally written for the 007 James Bond film, Tomorrow Never Dies”, but later ended up on 1998 album, “Elemental. This song really shows the bands complexity and talent with each member trading off on leads and solos. A great jam that is quite impressive.

During the show, Curnin does a fantastic job of being a front man. He sings his parts flawlessly as well as interacts and engages the front rows with jokes, back stories on songs and the bands history. During the big hits like, “Saved By Zero” and “One Thing Leads To Another” he gets the audience singing along and really brings the energy up.

After the first 15 songs, the band takes a brief break before coming back out and giving another two songs for the encore. “Deeper and Deeper” and “Secret Separation” finish off the night and of course are meet with chants and cheers.

The Fixx are still a great band and prove they’re no one hit wonders. They have reworked the classics slightly to have a modern flair while still keeping the soul of the 80’s. The digital drums have been replaced with an acoustic kit and synth sounds tamed down a bit, but if anything they just enhance the timeless classics.

If you were a fan of The Fixx in the 80’s, you need to check them out today. They’ve still been making albums which include a few from the 90’s through the 00’s and the most recent one, “Beautiful Friction” from 2012. They are a fun band that is still relevant and will make your feet dance and head nod all with a smile on your face as the iconic tunes come rolling back in.

For more on The Fixx, including tour dates, click here

For photo from this show at City Winery in Chicago, click here

Setlist: The Fixx live in Chicago at City Winery August 11, 2016