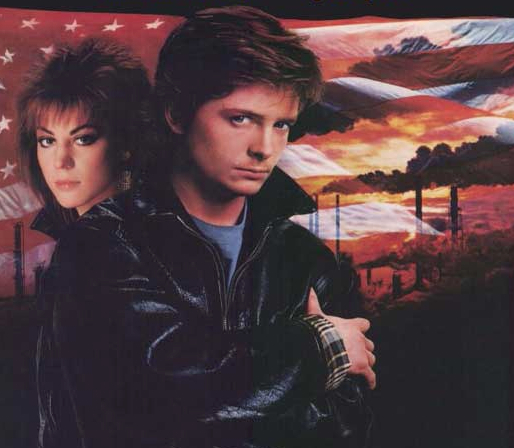 Light of Day, an 80’s film starting Michael J Fox and Joan Maria Larkin, better known as Joan Jett. It’s about a blue collar family, brother sister team, struggling to make it in Rock n’ Roll while dealing with family life issues and other drama. It was written and directed by Paul Schrader (Taxi Driver, American Gigolo, Raging Bull and Last Temptation of Christ) who was someone that grew up in the midwest and spent some time in Chicago throughout  his youth. The on screen duo even played live for a real, media held concert event. They were joined by a backing band and played select songs from the soundtrack for its release. Fox played guitar wearing a Joan Jett t-shirt on stage. (photo ©L. Foemmel)

So, why would we report on this? It’s a movie that’s true, but what sets this aside from just a dramatic movie is all the Chicago music ties. So many cameos, songs written and filming in and around Chicago make this one of the most underrated and overlooked films of it’s time and deserves it’s well, “light of day”.

It’s a movie that started filming in the mid 80’s, 1986 to be exact and release theatrically in 1987 to mixed reviews. As one critic, Tom Zoerner, describes it, “The siblings Patty (Jett) and Joe (Fox) Rasnick live in an industrial suburb in Cleveland, Ohio. While Patty is focused on their rock band, The Barbusters, Joe also cares for the family and the upbringing of Patty’s young son, Benji. Their pious mother reproaches them for their way of life, especially when they quit their jobs and go on tour, taking Benji with them. However, when their mother is dying of terminal cancer, they return home and resolve their problems with her.” What ensues is more than that of a rock drama, but a story that brings in true to life feelings and emotion to a human story.

All in all, this is a pretty decent movie. All things considered. I mean, this wasn’t a typical Michael J. Fox movie. This was during a time when Michael J. Fox tried to break from his goodie, goodie image from his Family Ties TV show and quirky Back To The Future rolls. For about 3 years, he only took rolls that were completely different. In this, we see him smoking, drinking, playing rock n roll. This one and another movie called, “Bright Lights, Big City” (a movie where Fox does coke most of the time) really broke that mold, but as we know now, didn’t last long. But what did was this movie.

The big music news story was that Bruce Springsteen wrote the title song for this movie. Light of Day was supposed to actually star Springsteen as his first forte into acting, but he turned it down and decided acting wasn’t going to be for him. The original title of this movie was supposed to be call, Born In The USA. Yes, that Born in the USA. Bruce originally wrote THAT song for THIS movie, but liked it so much he decide to keep it for himself. When he backed out of doing the movie al together, he wrote Light of Day as a second submission. Springsteen actually thanks Schrader in the liner notes of the Born in the USA album. I can’t imagine Springsteen in the Fox roll,  but it could have really changed the person we know today as “The Boss”.

Back to the Chicago ties.

Although the film is set in Cincinnati Ohio, most of it was filmed in Chicago. At a recent Joan Jett and the Blackhearts show in Chicago at FirstMerit Bank Pavilion, Jett reviled to the audience that she lived in Chicago for the better part of a year while filming here and fell in love with the city. She named off some of her favorite hangouts and clubs (most of which are long gone) but thanked the city for inspiration.

Near the end of the movie, Jett, Fox and the rest of the band are at a local bar sitting around bullshitting. A band is milling around in the background and starts to play. Jett’s character asks about them to one of her bandmates and Bu, Michael McKean (Spinal Tap, Better Call Saul, Lenny), answers with, “Oh that’s one of those cut rate specials. Cut rate rock- “The Problem”. They use to be called “Sins”, now they are just a part of the problem.” Well, guess who that industrial, techno, dance, punk rock looking guy from Cincinnati / Chicago is up there? It’s none other than, you guest it, Trent Reznor from Nine Inch Nails. Yeah, this was a very young Trent Reznor’s first acting roll. He heard about a movie filming in Chicago and being originally from Cincinnati and jumped at the chance to get involved.

Another notable Chicago character in this movie was Tom Irwin. Born in Peoria, Illinois and Steppenwolf Theatre alumni played one of his first rolls in this movie as Reverend Ansley.

The Light of Day was filmed all around the Chicagoland area including Maywood, Blue Island, Lincolnwood and (Berrrr-wyn sorry) Berwyn. Some of the other notable locations include one of our favorites. In another scene in the movie, Fox goes looking for his now estranged sister (Jett). He finds her in a bar in Chicago playing in another band and starting to make a name for herself with “The Hunzz”. We see Fox cross a busy street and the camera pans up to show a vary familular building. It’s Joe Shannahan’s Metro. Inside, Fox comes out of the stairway to the main hall. We see the famous stage we’ve here at in The Loop Magazine have covered so many times. Fox exits through another set of doors stage left to meet with Jett.

Another Chicago-centric character that many probably didn’t know then, much less now, but still a very important figure in the 70’s, 80’s  and 90’s Chicago music scene was a guest appearance from the one and only, 6’8″, Jolly Roger. A boisterous man who’s real name is still not known outside his inner circle of friends. Roger (who got his name in part from Gene Simmons of Kiss) was one of the club owners in the movie Fox and Jett haggled with to get paid at a gig. Rogers was a staple of the music scene back then and could be found at places like Metro, The Aragon, The Vic and Riviera. He made things happen for the north side venues, clients and bands. He wore many hats in his 30 + years of music production experience that included security, stage manager, production manager, tour manager, sound man and friend to many musicians including Al Jourgensen of Ministry and Trent Reznor. I recently met him at an event where he spoke on behalf of another Chicago music legend, Martin Atkins. Well, rather shouted at Atkins during a special event for 25 years of Pigface (another classic Chicago band that Rogers helped with but that’s another story).

Light of Day was filled with local Chicago music scene folks. Just look at the credits or better yet, ask any band or club employee who was around back then. Maybe they were an uncredited part of it too.

Besides the Bruce Springsteen title song, the soundtrack to Light of Day was filled with works by many artists including the real life, young aspiring musician, Michael J Fox himself who wrote and played a track. Others included Joan Jett of course, Jimmie Vaughn and The Fabulous Thunderbirds, Ian Hunter (Mott The Hoople, Ringo and Bowie), Dave Edmunds and Bon Jovi!

Sadly, this movie never got the proper home release or press either. It was released on video cassette a short time later but never did much on the shelf. An official US DVD version was never made. It’s near impossible to get a good clean legit copy of this classic. You can watch a low grade version of it online, but it just doesn’t do it justice. This movie needs an official US remastered blu-ray or at least HD digital download. Seeing and hearing this in all it’s glory is truly warranted and from the chatter online, wanted by so many.

The Chicago Community Trust Jazz On The Rooftop Stage Will Return As Part Of The Chicago Jazz Festival Photo Gallery : Slipknot