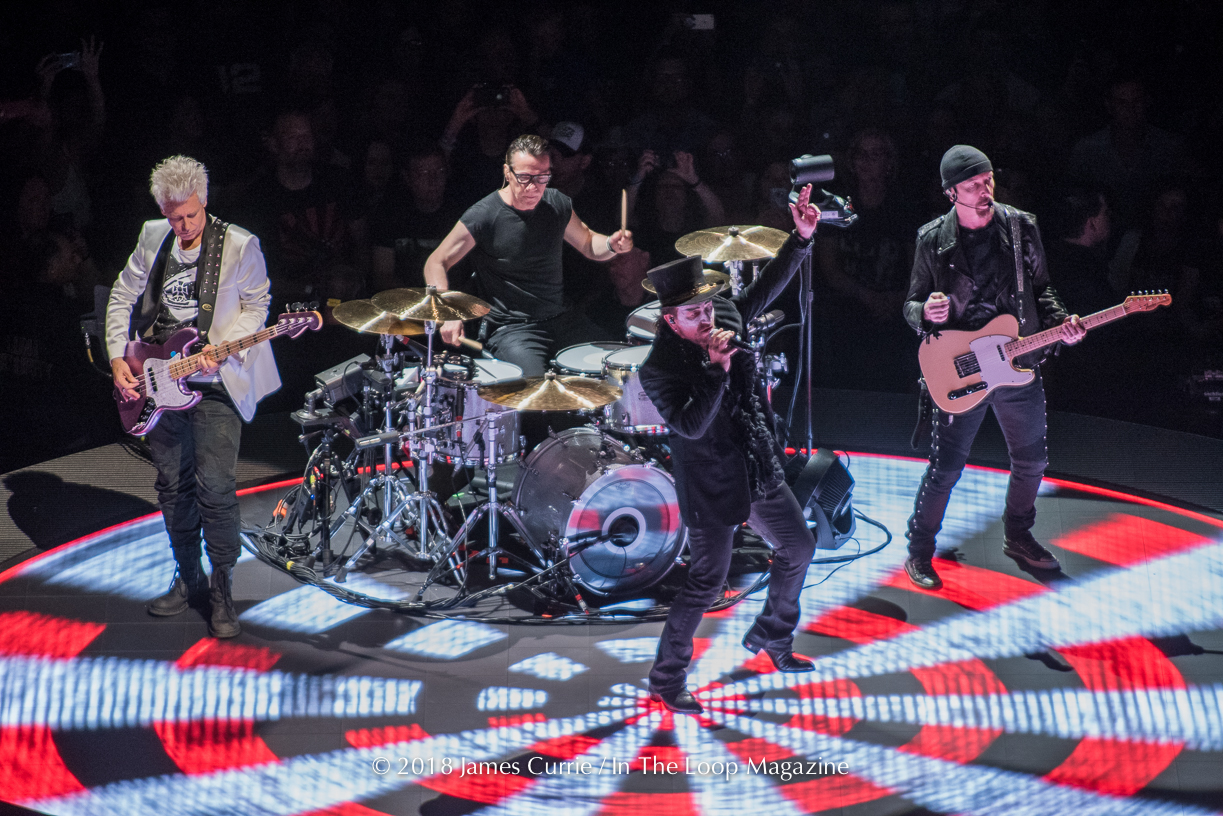 Looking back; looking forward. Two distinct approaches for any artist that are both wrought with opportunity and potential conflict. On one hand, looking back means an inevitable lean toward nostalgia (at least, in most cases) and looking to the familiarity of the past. When you’re in a band – one of the biggest bands in the world, as it happens – that means everyone will sing along with the songs you play live. Looking forward is a bit different; it relies on the hope that your audience will move forward with you, that they’ll want to see you grow. That they’ll want to see your innocence coupled with your experience, perhaps, and that they’ll accept whatever that means.

The world’s most famous Irish foursome got a chance to see what that type of acceptance looked like during U2’s eXPERIENCE + iNNOCENCE two-night two stop in Chicago this week, providing the final piece of what began as a planned trilogy back in 2014 with the release of Songs of Innocence and continued through last year’s anniversary tour for The Joshua Tree. Utilizing the same stage as the 2015 tour for obvious reasons – new album Songs of Experience is the second half of what Songs of Innocence started – the show featured new visuals, a daring setlist, and a message that, while at times forcing the audience to confront the darker side of American political culture, still resonated big and bold by the end, reinforcing the themes of love and hope that U2 have always championed.

Leading off with a salvo of tunes from Experience, including a wicked version of “The Blackout” played from inside the e+i tour’s massive, hollow screen, the set was as notable for what it included as what it didn’t include. Gone was any trace of The Joshua Tree, something the band had hinted at after last year’s anniversary tour, and while the removal of warhorses like “Where the Streets Have No Name” and “With or Without You” might have been jarring for casual, radio fans of the band (are there any of those left?), it was a refreshing opportunity for new tunes and rarities alike. Introduced by a comic-book style movie recalling the band’s flashy, glam rock ‘90s personage, they took to the ‘e’ stage at the far opposite end of the arena for a one-two punch of “Elevation” and “Vertigo” (which sounded as fresh on Wednesday night as it ever has) and a rousing, politicized version of “Desire” that featured a flashy, video roulette wheel adorned with the seven deadly sins. What followed was the rarest of setlist treats, the white whale of U2 fandom: Achtung Baby’s “Acrobat,” which, in the nearly three decades since its release, had never been played live until this tour. It came across like psychedelic gangbusters as Bono revived his ZooTV era alter-ego, the bedeviled rock star MacPhisto, who gleefully spoke of doing his best work during the recent KKK rallies and Russian election boondoggle before Bono took over again to sing “don’t believe what you hear, don’t believe what you see, if you just close your eyes, you can feel the enemy,” lines that have never been more relevant in American political culture as they are now. For an intensely personal song like “Acrobat,” the new context fit like a glove.

Which could be said of the setlist in general. The song selection for the eXPERIENCE + iNNOCENCE tour has been meticulously curated to fit the narrative that began in 2015, the tale of a personal journey from boyhood to manhood and everything that entails. In the case of U2, it entails a lot, from personal struggles and triumphs to becoming arguably the biggest band in the world and every step along the way. “Cedarwood Road” and a stripped-down, funeral march version of “Sunday Bloody Sunday” spoke to the band’s early years, as did a jubilant version of “I Will Follow.” “City of Blinding Lights” and “One,” which has become the anthem for the #womenoftheworldtakeover movement (see U2.com for more info), were prayers as much as they were songs, and “Get Out of Your Own Way,” immediately followed by “American Soul,” were a call-to-arms against the current tide of political narcissicism and false patriotism; in their own way, they embodied the sense of innocence that a young Bono might have felt toward America as a ‘idea’ more than a nation, a line that the band has used in the past, though never more effectively as they did here. And the show closers—new single “Love is Bigger Than Anything in Its Way” and “13”—felt as much like the end of something as U2 have ever offered on a live stage. As Bono lifted the roof on a house modeled after his own boyhood home on Cedarwood to reveal a giant lightbulb emerging—the symbolic glimmer of what was to come from a teenaged Paul Hewson—we can only hope that U2 will return home and, as they noted almost thirty years ago, “dream it all up again.” The break that followed that proclamation gave us Achtung Baby; indeed, each time U2 have ended one chapter, they’ve brought to life a new one that rivals everything that came before. And, as Bono sings in the opening lines of Experience, “this is no time not to be alive.

There’s a lot left to be done, gentlemen—the world needs you now more than ever, and this tour proves it.

For more on U2, the current tour and music, click here

For photos from the show at United Center, click here

Intermission (Hold Me, Thrill Me, Kiss Me, Kill Me – Gavin Friday version)

Photo Gallery: U2 @ United Center Courtney Barnett Asks Chicago, Tell Me How You Really Feel, At A Unique One Off Show At The Chicago Cultural Center