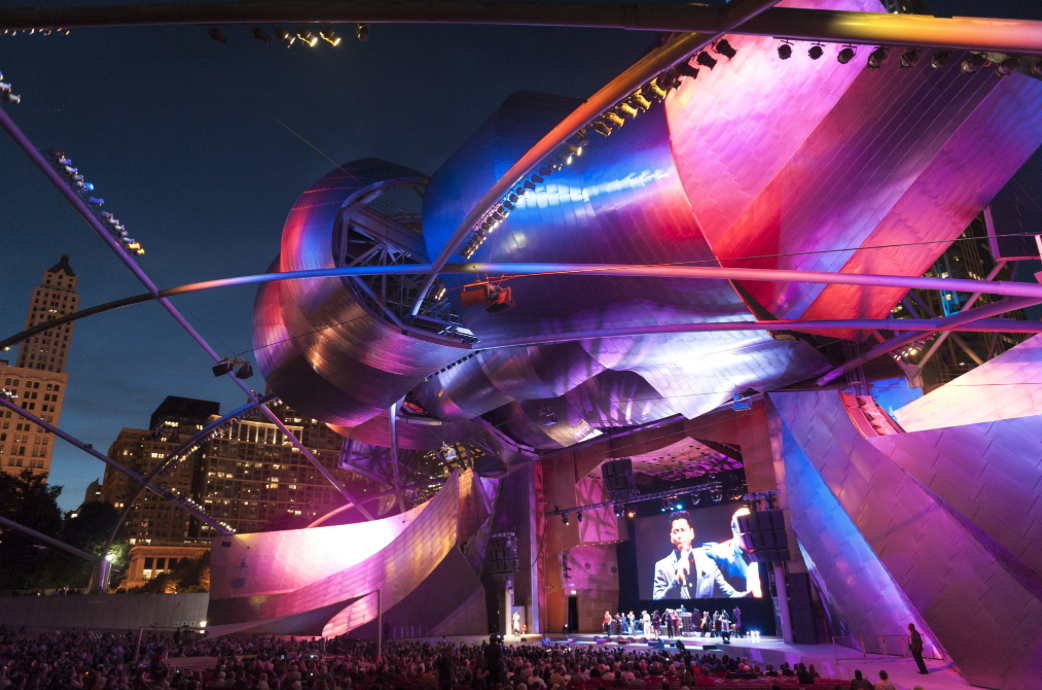 Chicago artists and cultural institutions, as well as youth “Rising Stars,” will be honored at a free show and concert in Millennium Park on August 28

Mayor Rahm Emanuel and The Chicago Department of Cultural Affairs and Special Events (DCASE) will honor four Chicago artists and institutions for their contributions to the city’s cultural landscape at the 4th annual Fifth Star Honors presented by Allstate Insurance Company. The 2017 honorees are hip hop artist and actor Common, celebrated architect Jeanne Gang, artist Kerry James Marshall and legendary Steppenwolf Theatre Company. Several youth artists will be recognized on the “Rising Star Honor Roll” for their emerging creative work. The free-admission show and concert will be at 7pm on Monday, August 28 at Millennium Park’s Jay Pritzker Pavilion.

“I am proud to honor these organizations and artists, who bring Chicago to the rest of the world and the world to Chicago,” said Mayor Emanuel. “Their work has changed and enhanced our city, and they have inspired and mentored new generations of artists who call Chicago home.”

The event will feature live performances and tributes recognizing this year’s honorees and their artistic work. The evening’s program will be announced at a later date. Last year, celebrity presenters included Cindy Crawford, and performers included Guy King and Shemekia Copeland.

“The Fifth Star Honors recognize the significant influence that these four honorees have had on Chicago’s magnificent art scene but also the world’s,” said Mark Kelly, Commissioner of DCASE. “Our honorees share one thing in common: they have brought beauty and enlightenment to the world while representing a city that respects and values the magic they have created.”

The City of Chicago will also honor outstanding youth with The Rising Star Honor Roll – a recognition program for students who show creative leadership, passion and exceptional skill in the arts. The Rising Star Honor Roll inductees will be announced later this summer, and an awards ceremony will be held in their honor at the Chicago Cultural Center in advance of the Fifth Star Honors show and concert in Millennium Park. DCASE is currently working with arts organizations to identify the Rising Stars for 2017. The honor celebrates the creative spirit of the next generation as an essential part of Chicago’s cultural life.

“At Allstate and The Allstate Foundation, we believe good starts young,” said Vicky Dinges, Allstate’s senior vice president of corporate responsibility. “Helping America’s youth gain the skills, resources and confidence to achieve success in their lives is an Allstate priority. That’s why we’re so proud to present ‘The Rising Star’ award, recognizing the tremendous talent among our hometown youth.”

Fifth Star honorees this year include:

Common is a hip hop recording artist, actor, film producer and poet from Chicago, Illinois. After debuting in 1992 with the album Can I Borrow a Dollar?, Common gained an underground following that led to his critically acclaimed and commercially successful album Like Water for Chocolate. He’s been honored by the Grammy Awards several times, winning Best R&B Song in 2003 for “Love of My Life” with Erykah Badu and in 2008 for Best Rap Performance by a Duo or Group for “Southside,” featurin    g fellow Chicago artist Kanye West. Common won the 2015 Golden Globe Award for Best Original Song and the 2015 Academy Award for Best Original Song for his song “Glory” from the 2014 film Selma, in which he co-starred as Civil Rights Movement leader James Bevel. Common’s acting career also includes starring roles in the films Smokin’ Aces, Street Kings, American Gangster, Wanted, Terminator Salvation, among others. He also narrated the award-winning documentary Bouncing Cats, about one man’s efforts to improve the lives of children in Uganda through hip hop/b-boy culture.

Jeanne Gang is an architect and MacArthur Fellow advancing the possibilities of architecture and design in the twenty-first century—including their ability to make a positive social and environmental impact. She is the founding principal of Studio Gang, an architecture and urban design practice based in Chicago and New York. Her analytical and creative approach has produced some of today’s most innovative architecture, including the 82-story, undulating Aqua Tower in downtown Chicago; the world’s first purpose-built structure for social justice education, the Arcus Center for Social Justice Leadership at Kalamazoo College; and the University of Chicago’s Campus North Residential Commons, whose curving landscape and pre-cast concrete buildings enrich the campus’ neo-Gothic tradition. Jeanne is the recipient of the National Design Award for Architecture from the Cooper Hewitt, Smithsonian Design Museum, and is a Chevalier de la Legion d’Honneur of France. In 2017 she was honored with the Louis I. Kahn Memorial Award and elected a Fellow of the American Academy of Arts and Sciences. She is the author of three books and her work has been published and exhibited widely.

Kerry James Marshall is an accomplished artist and MacArthur Fellow. Widely known as a painter, he also uses a broad range of media including collage, photography, video, sculpture, murals and comic books. His work addresses American culture and history, including the Civil Rights era and the Black Power movement. Painting in a Realist style, he depicts dark figures that celebrate black beauty and confront general racial stereotypes within contemporary American society. Marshall studied in Los Angeles at Otis Art Institute, graduating with a BFA in 1978. He spent one year, 1985-86 in the residency program at the Studio Museum in Harlem. He has had solo exhibitions throughout Europe and North America and his work has been included in such prestigious surveys as the 1997 Whitney Biennial, the 2003 Venice Biennial, the 2009 Gwangju Biennial, two Documentas (1997 and 2007) and the 1999 Carnegie International. His paintings are in the permanent collections of major public and private museums throughout the world. Marshall’s 30 year retrospective, Mastry, debuted at the Museum of Contemporary Art in Chicago in April 2016, then traveled to the Metropolitan Museum in NY, and the Contemporary Art Museum, Los Angeles, and included nearly 80 pieces.

Steppenwolf Theatre Company is the nation’s premier ensemble theater. Formed by a collective of actors in 1976, the ensemble has grown to 49 members who represent a remarkable cross-section of actors, directors and playwrights. Thrilling and powerful productions from Balm in Gilead to August: Osage County—and accolades that include the National Medal of Arts and 12 Tony Awards—have made the theater legendary. Artistic programing includes a seven-play season; a two-play Steppenwolf for Young Adults season; Visiting Company engagements; and LookOut, a multi-genre performances series. Education initiatives include the nationally recognized work of Steppenwolf for Young Adults, which engages 15,000 participants annually from Chicago’s diverse communities; the esteemed School at Steppenwolf; and Professional Leadership Programs for arts administration training. While firmly grounded in the Chicago community, nearly 40 original Steppenwolf productions have enjoyed success both nationally and internationally. With Anna D. Shapiro as artistic director and David Schmitz as executive director, Steppenwolf’s artistic force remains rooted in the original vision of its founders: an artist-driven theater, whose vitality is defined by its sharp appetite for groundbreaking, innovative work.