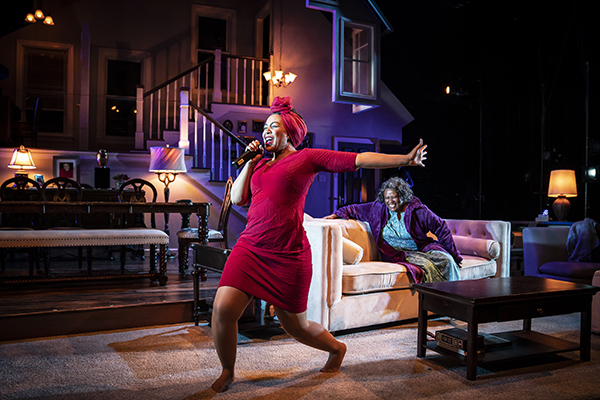 I often tell people that I was not lucky enough to see Steppenwolf’s original product of “August Osage County,” though I should have been smart enough – despite learning of the show early in its run (when WBEZ’s “Dueling Critics” labeled it a modern classic that was Pulitzer bound), I failed to make the time to commute from my DuPage County suburb to the theater’s Lincoln Park location, and thus missed out on a once-in-a-lifetime theater experience. As many an attendee has told me, seeing the production was akin to feeling greatness created right there on the stage.

Over the years, I’ve wondered what that experience would have been like, but now, thanks to the efforts of playwright Lee Edward Colton II, director Steve H. Broadnax III, and an exceptionally talented cast, I now know – the world-premiere play they have created at Victory Gardens Theater, “The First Deep Breath,” is undoubtedly an instant classic, a 210-minute epic that inspired more enthusiasm and energy than at least 95 percent of the plays I have seen on Chicago stages (and I have seen hundreds, over the years). Hilarious, heartbreaking, and inspiring in equal parts, this is a play destined for bigger stages, and Chicago audiences should see it now while they have the chance.

Set in present-day Germantown, Philadelphia, “The First Deep Breath” concerns the unique dysfunctions of the Joneses, an upper-middle-class black family headed by the charismatic preacher Albert Melvin Jones III, the lead pastor for a Philadelphia megachurch. Already teetering on the brink of disaster – Albert’s wife, Ruth, is suffering from an accelerated case of dementia; AJ, their youngest son, feels suffocated under his father’s immense expectations; Dee-Dee, their daughter, is constantly compared to her recently deceased twin sister, who has taken the status of martyr over the years; and Pearl, Ruth’s sister, is ostensibly staying with them to watch Ruth, while in reality, she yearns for Albert’s affections – amidst all that, the family’s eldest son, Little Albert, returns home after serving a six-year prison sentence for rape. Albert’s return is effectively a wrecking ball on the Jones’ glass house, and it sets in motions a series of events that shatter whatever stability the family still had – while forcing them to admit the uncomfortable truths that will help some of them finally move forward.

I will not reveal any more of the plot in this review – Colton’s twists and revelations are so carefully placed throughout the play’s long running time that it would be a grand injustice to reveal them here – but I do need to stress the atmosphere of this play, and why it is essential to its classic status. The play opens with a sermon from Albert. Standing before the audience in his robes, Albert (played brilliantly by David Alan Anderson) preaches with pronounced enthusiasm, whipping his imaginary congregation into a frenzy – except at the production I saw, there was nothing imaginary about it. The play’s audience, which was mostly black and brown, was enthralled with Anderson’s spirit and energy, and before long was answering his calls and beckoning him for more. That energy – musical, contagious, undeniable – hardly let up through the play’s entire run time, and created a feeling of community and empathy that is wholly unique to the stage.

This is truly as good as it gets when it comes to American theater, and you should make an absolute effort to see “The First Deep Breath” – if tickets are even still available.