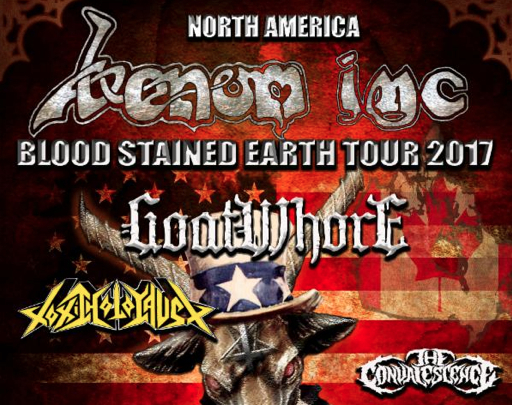 VENOM INC just finished up a huge performance at this past weekend’s Blackest Of The Black festival in Silverado, CA. Now, you have more chances to witness the band’s live onslaught! VENOM INC have announced their upcoming Blood Stained Earth Tour, featuring support from extreme metal giants Goatwhore and Toxic Holocaust, as well as fast-rising death metal group The Convalescence. The tour will kick off in Philadelphia, PA on September 1 and visit several major cities in both the U.S. and Canada, coming to a close in Baltimore, MD on October 2.

Tickets for the Blood Stained Earth Tour go on sale this coming Friday, June 2 at 10:00am local time. Visit your local venue website or band websites for more information.

VENOM INC frontman Tony Dolan says, “It is with the greatest pleasure that we announce our 2017 North American Blood Stained Earth Tour! With a brand new set, we cannot wait to see our North American fans – old, loyal and new. With our brothers Goatwhore, Toxic Holocaust and The Convalescence, we give you a package that will leave you full of the best metal any tour can produce! Don’t miss it, I promise you’ll regret it. ALL HAIL NORTH AMERICA. AVE!”

In addition to the tour, VENOM INC are set to perform dates in Europe throughout 2017, including stops at MetalDays Festival, Heavy Metal Cauldron and others. The band will perform classic Venom sets. See below for all current performance dates:

In 2015, a chance encounter brought an offer to Tony Dolan (vocals, bass) to reform the line-up of Venom that had recorded the classic Prime Evil album and solid follow-up albums. These classics kept the band very much alive during the onslaught of Grunge and Brit Pop that destroyed all but the most-hardy in the early 90’s. Dolan seized the opportunity to continue the Venom legacy that had begun when current bandmates Jeff Dunn (aka Mantas on guitar), along with Tony Bray (Abaddon, drums), formed the original band in 1979 and brought the world extreme metal in the form of the Welcome To Hell and Black Metal albums. Topped off in the beginning by the voice of Clive “Jesus Christ” Archer (and later by Cronos and “The Demolition Man” Tony Dolan), Venom was – and still is – a force of nature.

VENOM INC upholds the true intention of Venom that began in 1979, and vows to rekindle the original spirit that was lost over the years. For every single Legionnaire from Venom‘s Legions and new fans alike, VENOM INC will continue to grow and perform the classics with heart, soul and true meaning.