Twenty-Five Years and One Week Later… Pigface25 – The Live Review 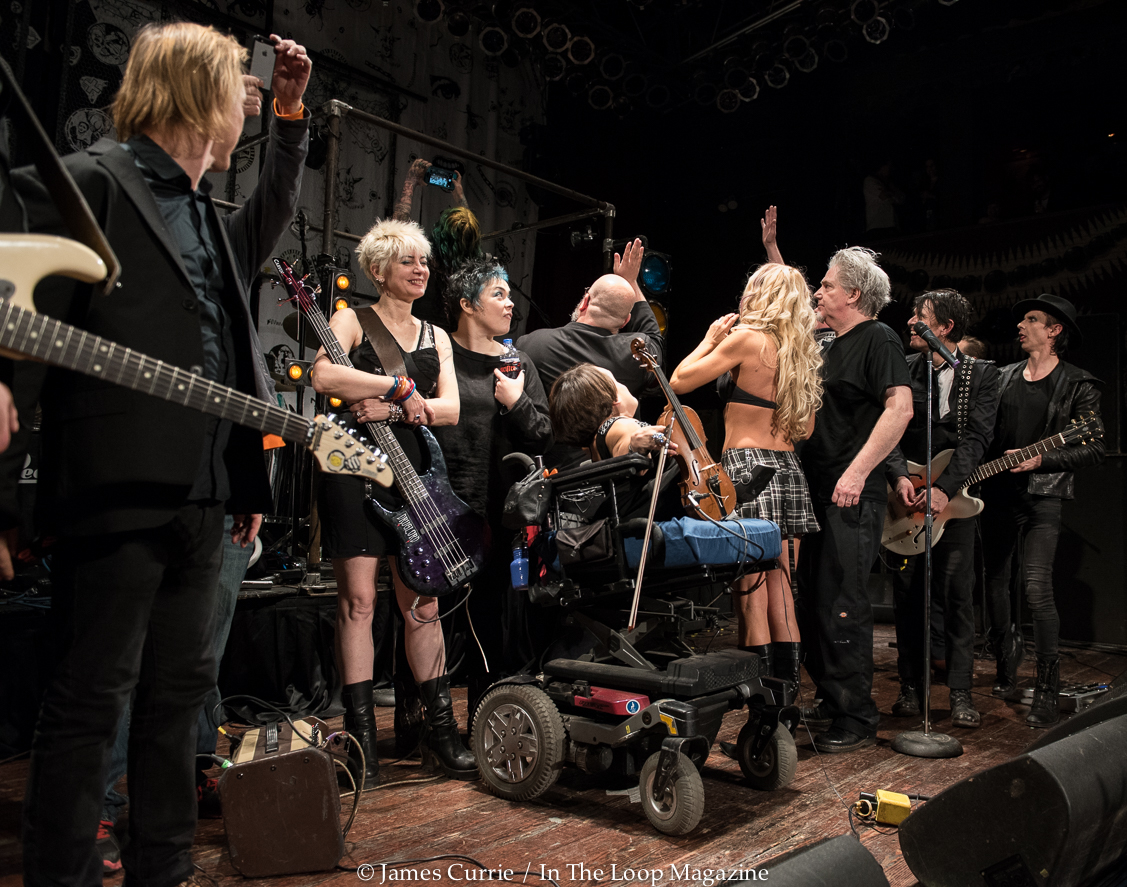 Last Friday night, November 25th, 2016 at Chicago’s House of Blues marked an important date in the city’s vast musical history. The night which members past and present, old and new of the often described “industrial rock supergroup” Pigface reunited to celebrate 25 years of organized chaos.

Pigface is a band who have had so many collaborators that not even Wikipedia can contain a full list. They branched off of the band Ministry in 1990 when Martin Adkins was touring with them. He and William Rieflin started the project with the idea of retaining a revolving pool of like-minded musicians to put out some of the most intensely dark music possible. Over the years Pigface has worked with musicians like Danny Carey from Tool, Dean Ween, Chris Connelly, Flea, Steve Albini, Duane Denison of The Jesus Lizard and Tomahawk, Paul Ferguson of Killing Joke, and Black Francis of The Pixies to name only a few. Trent Reznor of Nine Inch Nails co-wrote and sang on the song ‘Suck’ in the early days, eventually re-recording the tune for Nine Inch Nails’ “Broken” EP.

There were a few openers kicking off the night including W.O.R.M., and Project 44. During the set of the latter, I felt as if the WWE Royal Rumble had erupted on stage. The band powered through extremely fast and heavy riffs while pummeling the audience members with intense rhythms and melodies. One of the most fascinating parts of their set was their trash can player, who wore a black ski mask and beat the literal garbage out of his two metal trash cans. Occasionally he would throw them around on stage, almost as if he was trying to destroy his enemies. The drummer, who had a style reminiscent of Led Zeppelin’s John Bonham mixed with the industrial power of Nine Inch Nails plowed through the set, keeping the band on par with the energy that was consistently rising throughout the entire show.

The night was barely getting started as there were still two more openers, Ruby and Dead Voices on Air. Each getting their own 30+ minutes sets. After the show’s openers finished their sets, it was finally time for Pigface to hit the stage. The moment we had all been waiting for, the main event. Their performance consisted of the return of a few former members such as Dirk Flannigan, Mary Byker, En Esch, Lesley Rankine, Fallon Bowman, and Curse Mackey. The band and everyone involved was in high spirits for such a nostalgia filled evening. Pigface’s set opened with Adkins coming to the front of the stage to tell a few stories of the band’s past, as well as his now infamous, “Fuck” list poem expertly exclaiming “fuck Los Angeles”, and “fuck Peanut Butter” to the crowd’s delight. There were lots of cheers for the stories being told at the top of Pigface’s set. After a half hour or so of reminiscing and going through the past, it was time to face the present. That’s when all Hell broke loose.

Once Pigface went on the audience was treated to an all-too-trippy stage show. A six-panel silhouette screen, if you will, dominated the front of the stage while Pigface ripped into their opener behind it. Crew members were flashing lights onto the band from behind the screen while they played to create stunning effects. Pigface has been known to bring a wide range of visual elements to their shows to help push the overall performance over the top.

One of the first few songs played was ‘Murder Inc.’, a tune with absolute power behind it with a chorus exclaiming “We’ve come to fuck you over!”. The guitar solo by Krztoff AKA Chris Liggio of Bile was furiously ripped open, reminding audience members of the sheer musical talent on stage. It was almost as if the audience was being collectively, musically punched in the face over and over, to everyone’s delight. The energy was so high and could have only been generated by the uniqueness of this specific show. Twenty five years after its conception, Pigface was on stage again, doing what they did best.

There were some really high moments in the show. A multitude of different instruments found their way to the stage including when lead guitar player BobDog AKA Robert Catlin of Evil Mothers opened the song ‘Closer to Heaven’ with an electric sitar, while another played what seemed to be some sort of electric recorder. Adkins played a cautious and gentle tambourine part until jumping back behind the kit. After a few minutes of setting the scene with a beautiful soundscape they were joined on stage by Charles Levi on bass and vocalists Groovie Mann (Franke Nardiello) and Lacey Sculls to bring the eight and a half minute piece to a giant peak. Nardiello walked around the stage during the song with a tech holding a bright, electric halo over the back of his head, adding a unique visual element to the performance. They then rip into the Thrill Kill Kult classic, Daisy Chain For Satan. The crowd erupts yet again.

Another highlight of the show came during a down time. During one of the breaks, the lights dimmed, Atkins walked out and and introduced Gaelynn Lee (Murder of Crows). Lee a violinist from Minnisota, is in a wheelchair from brittle bone disease. She centers up on the stage and performs a Pigface classic written by Chris Connelly, Point Blank, solo, with only her violin, voice and effects pedals. After her four minute rendition was complete, there wasn’t a dry eye on stage. Atkins even said, “Wow, I never thought I’d have fucking tears at a Pigface show”.

During the song ‘Auto Hag’ several members of the industrial supergroup marched around the stage waving checkered racing flags, while head banging to one of the heaviest riffs ever played. Even guitar player Krztoff ,who was sitting down in a chair wearing a neck brace, was head banging harder than nearly anyone else in the venue. Adkins’ drum kit had a cube-like, six to seven foot high metal frame setup around it for the whole show. Hanging from the poles were a disco globe, which Martin would occasionally knock back and forth, creating a wild stream of light reflections all over the venue, a street light, a lit up, upside down cross, and more. Band members would sometimes hang from it like it was a jungle gym. From a percussion standpoint this song has some of the most complex rhythms and drum fills in their set. For nearly the entire show Adkins was joined by second drummer, Leanne Murray. Watching a band perform with two drummers simultaneously is always fascinating, especially when they’re perfectly synced up. So, to see a song like ‘Auto Hag’ expertly executed with two drummers was a big highlight.

The surprises just kept coming. Just when we thought the night was coming to and end, the stage is joined by yet another Chicago industrial icon, Jeff Scheel from Gravity Kills comes out and performs Guilty. This, after an already 2 hour set, after which, the show proceeds with even more.

Right before they launched into their famous song ‘Suck’ the house lights dimmed, and a giant frame hanging from the back of the stage lit up for the first time, spelling out the word “SHIT”. One crew member paraded around the stage holding up a ten foot high cross that resembled the six sides of a dice. This was an all-star performance, with members from the opening bands jumping on stage to add more and more drums, and even the trash cans from earlier in the night to the performance. At the end, the entire venue collectively screamed “Suck, Suck, Suck!” to end the song. This was, to say the least, a big ass party. What a way to go out.

To warm up for their big night, Pigface put on a show at Reggie’s Rock Club the evening before (Thanksgiving), working out their two and a half hour long performance. It seemed to pay off. It was obvious that everyone involved couldn’t be happier to be a part of such a big show. Pigface’s music can be aggressive and intense but the smiles on stage proved that they were in the right place. The amount of pride Adkins and his friends have for being such a big part of the Chicago music community is unmatchable. Every city and music scene needs a catalyst to push musicians beyond their normal creative boundaries. Martin Adkins and the entire Pigface family has given Chicago a wonderful gift by supporting the local communities and continuing to create and perform for us. November 25th’s show proved that music can bring anyone together at anytime, anyplace.

Fuck You! We’re from Chicago! – Pigface

For photos from the Pigface 25th Anniversary show, click here

For merchandise from the Pigface 25th Anniversary show, click here