Interview : The Darkness On Latest Album, Last Of Our Kind 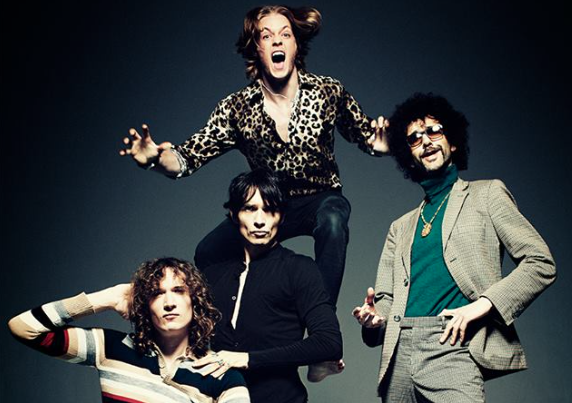 In The Loop Magazine’s Christopher David had a chat with The Darkness about the bands latest album, Last Of Our Kind. Below, you’ll find out about the recording process, the new drummer with a tie to Queen and longevity as a still evolving band.

The Darkness are currently out on tour for this album and dubbed it, Back To The USSA Tour 2016.

Chris (In The Loop Magazine): Tell our readers a bit about recording 2015’s Last of Our Kind.   How has the response been so far since its release?

Frankie Poullain (The Darkeness): We’ve had a warm and affectionate response to this album, plenty of hearty back slaps at first and that seems to have given way to one almighty slobbery cuddle.

ITL: How did having Dan produce the record (and acting as co-producer on 2012’s Hot Cakes) influence the process, or how did it differ, as a result, from your previous recording experiences – say, with Roy Thomas Baker?

FP: It’s certainly been more harmonious and open. Open hearts are important. An open creative environment if you like. A can opener at hand is crucial too for a quick beans on toast between takes.

ITL: Rufus Taylor, son of legendary Queen drummer Roger Taylor, is now your drummer.  How did that come about?

FP: Providence. Serendipity. Foresight. Circumspection. Sagacity. Circumcision… All words that I don’t really understand and yet perhaps, just maybe, they have something to do with this beautiful boy being the new drummer for The Darkness.

ITL: Last of Our Kind is a very conceptual record.  Concept albums tend to be a product of a band really visualizing something specific, so was making a concept album something that you’d planned to do previously, or was it something that evolved organically as the songs came along?

FP: We’re becoming more conceptual as we get older, I think…or it may be because people use concepts to escape from the current situation they are in. And to fulfill a need to express themselves. Which is also escape. Perhaps young folk have less need of concepts, perhaps concepts are a shield against death. Or maybe they’re just a laugh. Which is also a shield against death. It’s all pretty mystifying really so maybe I’ll quit while I’m ahead. Or behind, if you prefer.

ITL: You arrived on the rock scene at a very strange time in rock music – 2005 was a point at which a lot of different sub-genres and new bands were coming along, and you squarely focused on a more classic, glam-rock approach to things – to a point where there were critics who thought you were a joke.  How have you seen or how do you feel like peoples’ perception of The Darkness has changed?

FP: A lot of people have the blind spot of a fixed mindset, their original perception of something, no matter how randomly that perception came about, is cemented in there. I have a family member like that, he’s the loveliest fellow imaginable – generous, energetic, intelligent, positive, fun loving and yet he cannot or will not change his opinion of something once it is lodged in there. The British media is a bit like that. Except it’s not intelligent.

And actually, it looks like we’ve ridden out a 10 year backlash here in the UK and things are swinging around, we have the most festival bookings this summer since 2004. The British press are great again, yay!

ITL: That’s great to hear! So, what can American fans expect from the “Back to the USSA” tour?

For tickets to the Chicago House of Blues show and other tour dates, click here