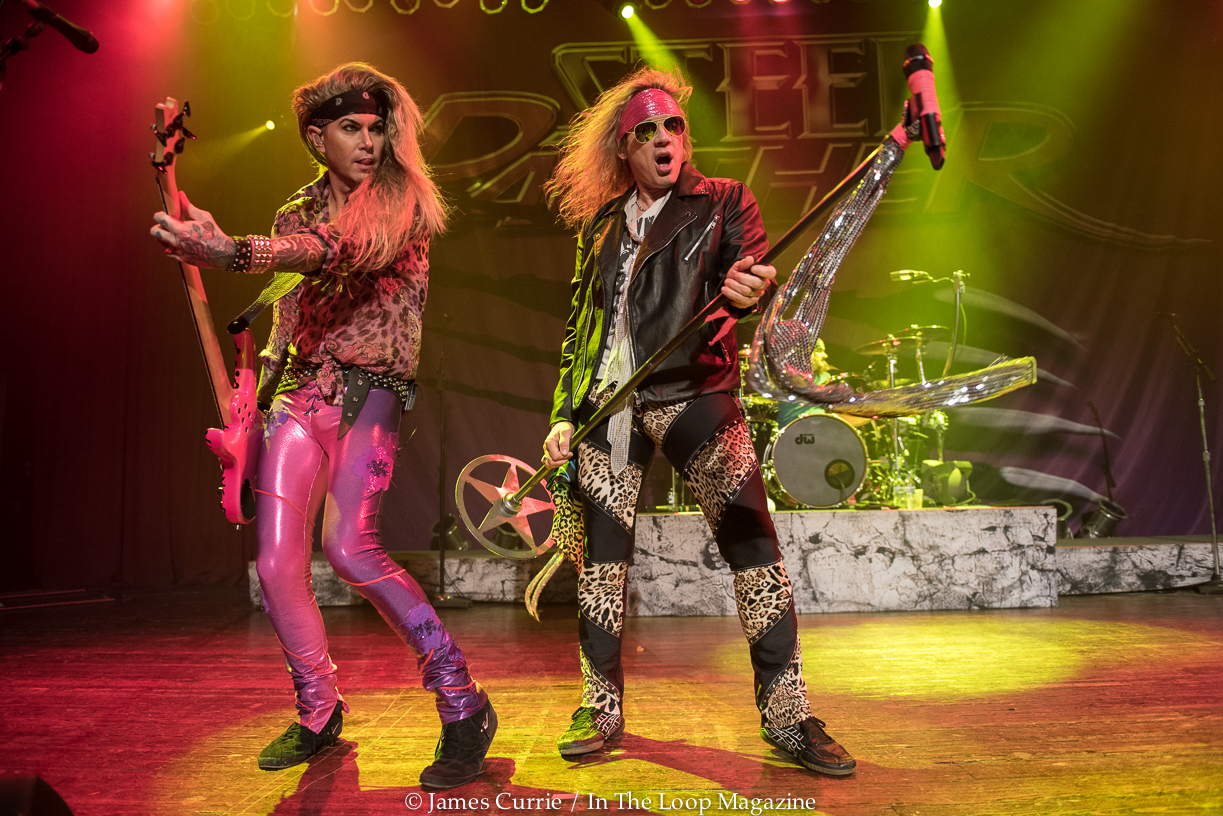 Steel Panther clawed through the crowd at House of Blues and gave a great set to a nearly sold out crowd. Whether you want to call them a novelty act or a parody band one thing in common is they still know how to entertain crowds.

Steel Panther started to gain popularity back in the early 2000’s on the Sunset Strip in Los Angeles as “Metal Shop” soon changing their name to “Metal Skool” and then to “Steel Panther” as we know them today. The lineup consists of Ralph Saenz (Michael Starr) on vocals, Russ Parrish (Satchel) on guitar, Darren Leader (Stix Zadinia) on drums and Travis Haley (Lexxi Foxx) on bass. As the band dresses in their tight clothes, teased hair and glam makeup, so did many of the fans. Steel Panther, is billed by many, as the best band that never made it big in the 80’s that you would want to party with if tomorrow is the end of the world.

As the curtain opened, the crowd roared with cheers as Michael Starr danced and sung to the crowd opening with the song “Eyes Of A Panther”. The crowd could be heard singing along word for word as they were swaying their arms in the air following Starr’s lead. The crowd’s enthusiasm was definitely on a high note throughout the night as they watched the humorous exchange that the band members gave each other in between many of the songs. Most of the kidding found it’s way to Lexxi’s glamorous and primadonna style. These jokes have been constantly used by the band over the years, but still are extremely funny some to the point of being raunchy.

Steel Panther does it the best of interlacing their filthy jokes with their exceptional playing and song writing skills. That goes to show how the band has maintained a strong fan following almost to the point of cult status. The band kept the crowd interacting with them with the favorites “Party Like Tomorrow Is The End Of The World” and “Death To All But Metal”. About two dozen girls found their way to the stage during “17 Girls In A Row”. The crowd cheered them on as they watched them danced and rubbed up against the band members.

They did a two-song encore with the rock ballad “Community Property” and kicked it up with “Party All Day (Fuck All Night) giving the audience one last time to enjoy the ultimate party on a Sunday night. No matter what day of the week it is Steel Panther brings the party every time, even if you have seen them perform before, you will not be disappointed. You can see that they do not take themselves too seriously as they connect with the crowd. What is serious, they have the staying power to keep rocking the world and to make sure that everyone enjoys the show.

For a video clip of Steel Panther at House of Blues, click here