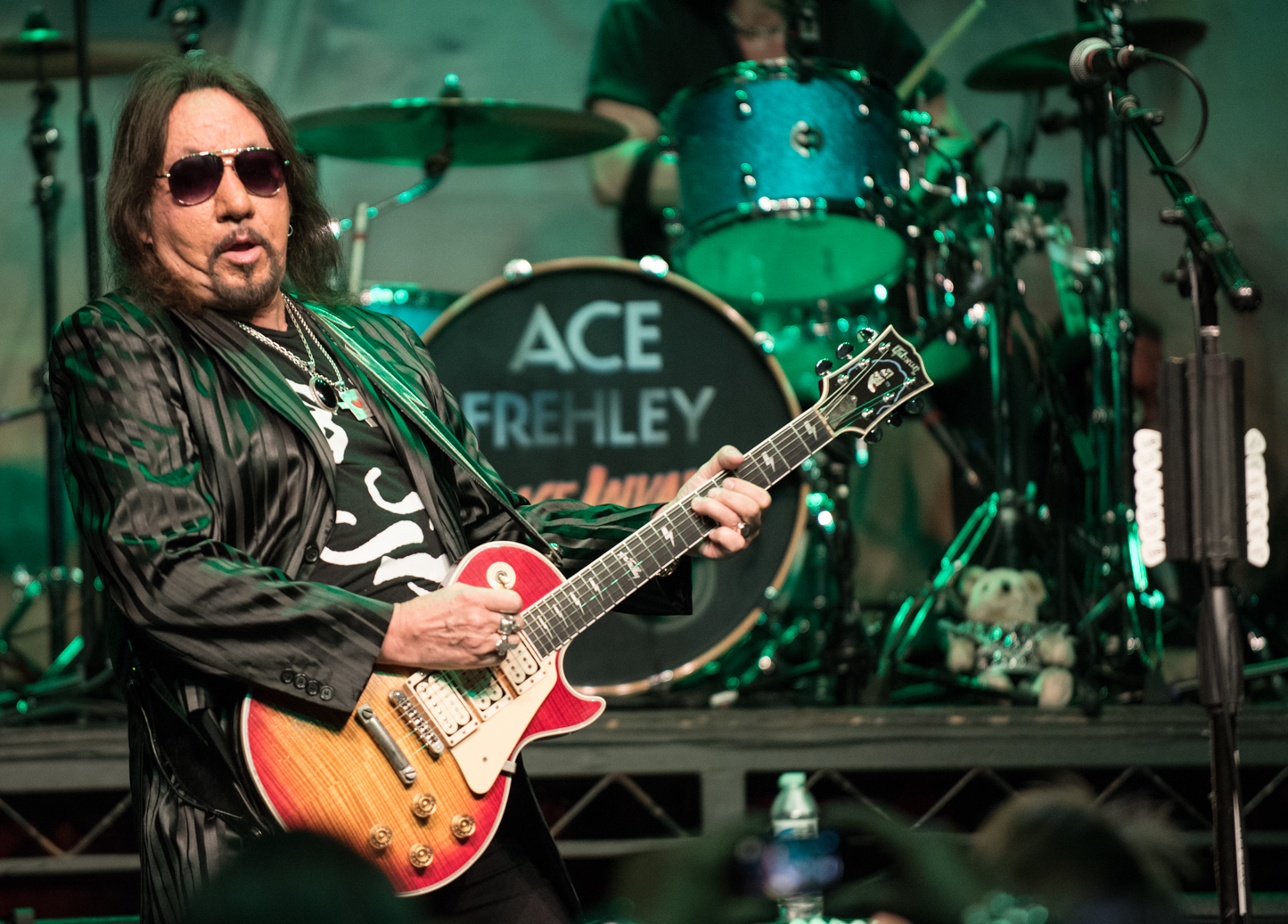 St. Charles’ Arcada Theatre was the unlikely spot for an space invasion on Tuesday night, but it wasn’t little green men or slimy creatures that graced the stage. It was rock n’ roll’s one and only guitar slinging spaceman: Ace Frehley.

Touring in support of 2014’s Space Invader album, Frehley’s current band is perhaps the strongest lineup he’s ever had since the dawn of his solo career. Bassist Chris Wyse, drummer Scot Coogan, and longtime guitarist/collaborator Richie Scarlet rounded out a no BS sledgehammer of a setlist, consisting almost 50/50 of Ace’s solo work alongside some KISS classics.

In the spirit of KISS, the band took the opportunity to showcase all four members on vocals at one point or another. Wyse, a brilliantly talented bassist (who utilized his bass solo to perform a very cool cover of the “Halloween” theme), took the lead for “Strange Ways,” while Scarlet proved his worth as a frontman on two cuts from Ace’s ‘80s solo work, “Breakout” and “2 Young 2 Die.” Coogan rounded out the foursome by standing in for Paul Stanley on cuts like “Love Gun” and “Detroit Rock City.” The band’s chemistry is far beyond that of a star and three bit players; rather, it feels like a solid unit that could do some real damage in the studio together.

But the star, of course, was Frehley. Pulling out most of his KISS era tricks (a guitar solo that literally smoked, the light up guitar for “New York Groove”) for the near capacity crowd, the guitarist’s multigenerational appeal was apparent to everyone, and he seemed to be having a blast. St. Charles is far enough out from Chicago to draw in audiences that might otherwise find their way to the city, and the Arcada has an intimate, small-town theater feel to it that made the experience unique even for the rock n’ roll vets in the room. With a group of enthusiastic kids holding down the front, the band ate up every second, flicking guitar picks, posing for pics, and even bringing one little girl in full Ace regalia and face paint onstage to sing along.

“Who thinks that Ace should run for president?” Wyse asked at one point, and Frehley laughed, waving off the cheers of the crowd to start the next song. Frehley was always the most humble member of KISS, focused squarely on straight forward rock n’ roll without much experimentation, a devotee of the ‘if it ain’t broke’ school of musical philosophy, and it’s served him well, as the 17 song set reflected, highlighting some of most anthemic moments in Frehley’s career. “Rocket Ride,” and “Rip It Out,” two of the best KISS era tracks on the list, were spot on with the decibel level of a learjet, and, of course, there’s the solo in “Shock Me,” the one that launched a thousand rock bands and had countless parents buying guitars for their kids.

Say what you want about KISS their influence is undeniable, and Ace Frehley is one of the last true rock legends. Seeing him in such an intimate setting, literally shaking dust from the Arcada’s rafters, was an experience that doesn’t come along very often. Count yourself lucky if you had the pleasure of being there. And if you weren’t, next time the rocket rides through town, you have no excuse.

For more on Ace Frehley including the tour, click here.