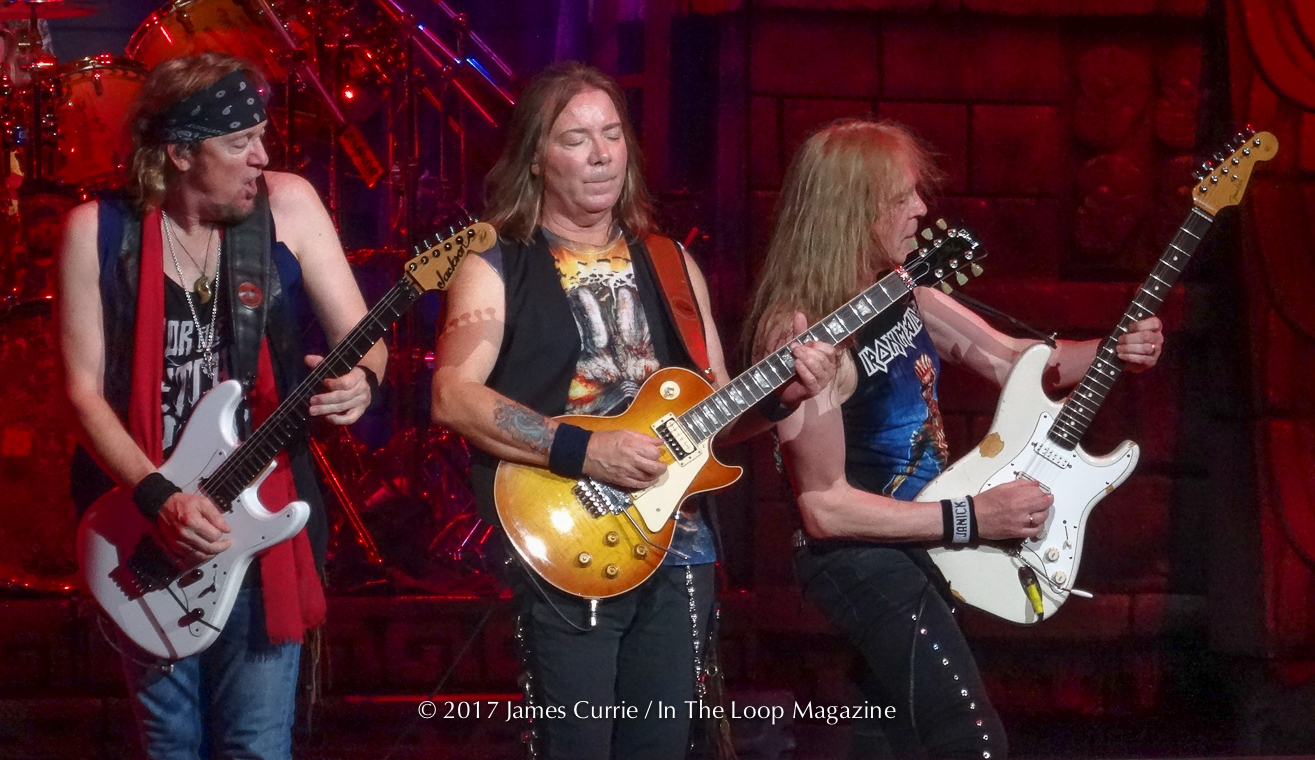 For as broad a genre as heavy metal is, there are a few undisputed heavyweights without whom the genre wouldn’t exist as we know it today – and Chicago got the chance to see one of those heavyweights in action when Iron Maiden brought the Book of Souls tour to Tinley Park on Thursday night.

The setlist leaned heavily on that 2015 record in a set that effortlessly balanced new and old, and if there were some obvious hits missing, it was refreshing to see a band go all-in on their sixteenth album this way, with bassist Steve Harris leading the crowd in sing-alongs of new tunes like “Death or Glory” and the sprawling, riff-drenched “Red and the Black.” (Indeed, it left this writer wishing for more of this from Maiden’s contemporaries, if they even have any left – Judas Priest and Metallica most immediately come to mind despite the difference in age – and the enthusiastic Maiden crowd was onboard all the way.)

Of course, it wasn’t just the solid ebb-and-flow of the setlist that kept the place on its feet. Vocalist/pilot/cancer-survivor/superhero Bruce Dickinson is surely, at this point, destined for some special Hall of Fame. What can be said about the dynamic, charismatic Dickinson that hasn’t been said already, at this point? At fifty-eight years old, his voice is as strong as ever, and considering the energy of Maiden’s set, it was no small feat. Whether waving flags from a platform during “The Trooper,” assaulting a towering Eddie by ripping the zombie mascot’s heart out during “The Book of Souls,” or stalking the elevated walkways during an epic “Powerslave,” Dickinson is a consummate showman who isn’t afraid to show how much he’s having fun. Indeed, the entire band exchanged smiles for most of the night, with drummer Nicko McBrain unable to contain his grins behind a massive kit while guitarists Dave Murray, Adrian Smith, and Janick Gers palled around the stage like teenagers trying to good-naturedly outdo each other. (Which, incidentally, would be a daunting task for any musician, given the complexity of Maiden’s three-pronged guitar attack.)

Ending the night with a giant, glowering Eddie sneering along to the anthemic “Iron Maiden,” “Number of the Beast” (featuring a giant demon goat for good measure), and “Wasted Years,” Maiden proved yet again that they are, at this point, unrivaled in the world of heavy metal – a band who has maintained its stature as giants of the genre by playing to their strengths for nearly forty years. Nearly two years after the release of arguably one of the best records in their extensive canon, Maiden hasn’t shown a hint of slowing down, and if Thursday’s show was any indication, let’s hope they don’t any time soon.

For photos from the Iron Maiden show at Hollywood Casino Amphitheatre, click here

If Eternity Should Fail

Children of the Damned

The Red and the Black

The Book of Souls