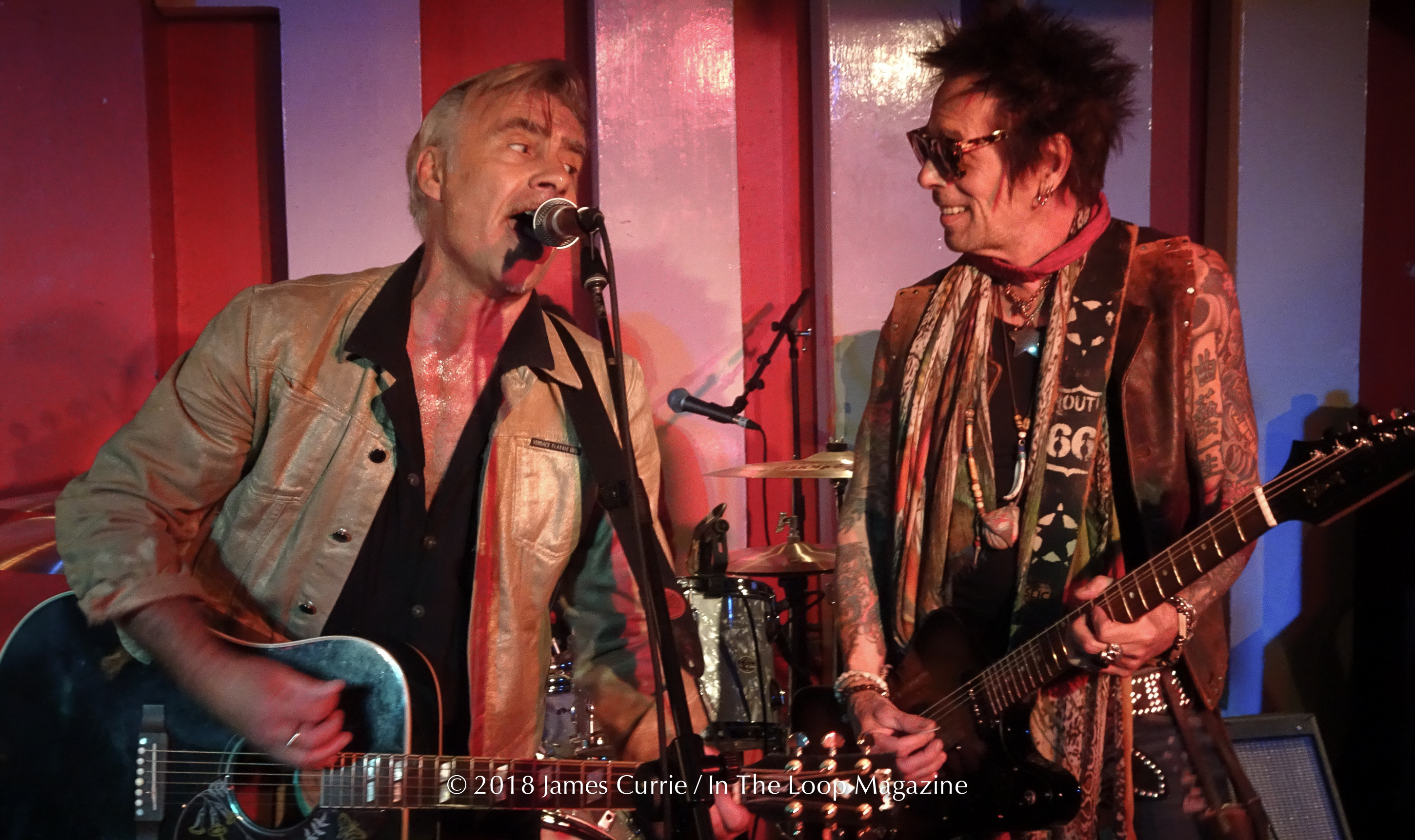 On a Friday night in the Soho district of London, a small venue called the 100 Club is stage to a night of original punk rockers from the UK. Headlining is Glen Matlock, the original bass player (and current when they reunite) for the Sex Pistols. There’s no denying he is a founding father of the genre that still runs strong today and nearly all who followed site Matlock and his mates for started it all. Tonight was is bands new album, “Good To Go” launch show.

Tonight, Glen Matlock brought along a rag tag show of supporting acts to support his current super group. Opening the night was a new band called, Thee Unholy Innocents. led by singer, Neil Robertson, the band played through the handful of originals they had. They sounded like a mix of Bauhaus, She Wants Revenge and Interpol. After they played, I got a chance to speak with him briefly and asked where did they come from and how do I buy their music. Robertson chuckled and said, “Sorry mate, we don’t have anything yet. This is only our second show.” I told him I really liked the single they have out (complete with music video) and really wanted more. “We’re working on that”, he said, “hopefully soon enough.” (Check back later for full interview and details on this in later editions of In The Loop Magazine)

Other acts on the bill included another local London punker, Jean Marie (JC) Caroll, from the band, The Members. He performed solo mixing things up with reworked tracks, cover tunes and their biggest hit, “This Is The Sounds Of The Suburbs” of their 1979 debut album, At The Chelsea Nightclub. All this while decked out head to toe in pink. A pink trucker hat, pink tennis shoes and pink t-shirt adorned with gold chains and grey rimmed pop bottle glasses.

For the main event, Glen Matlock came out with his band. He’s touring in promotion of his new album, Good To Go. His current line up consists of Jim Lowe (producer / mixer / engineer) on bass, Chris Musto (Nico / Kim Wilde / Joe Strummer) on drums, Earl Slick (David Bowie / John Lennon / Phantom, Rocker & Slick) on guitar and Matlock himself on acoustic guitar and vocals.

This ain’t a tribute band. He’s not going around doing gigs riding on his past, far from it. Yes of course he plays a couple Sex Pistols songs, but they are now reworked for a modern, grown up era. He’s grown tremendously as a musician in the last 30 + years. He’s more dapper and refined. His music now more resembling a more rock-a-billy sound. His look now complete with greying hair and john Waters pencil mustache.

The 100 Club was absolutely packed and filled with aged punkers from the time when that genre was new. And they still know how to represent with not only the look, but attitude and voice to match.

Matlock played through fourteen songs that included new tracks, cover songs and ending the main set with a classic Sex Pistol track that he wrote, “Pretty Vacant”. This was of course the highlight for many including myself as we all sang along like kids gathered around a campfire sing song. The band took a small break and came back for three more songs before calling it a night.

It was a real treat to witness this show for this Yank. I mean, how often to do you get to say you saw a Sex Pistol live in an underground punk club in London? While there was no anarchy at this show, it was defiantly one for the books. Never mind the bollocks, these are todays true punk rockers.

For a live video from Glen Matlock at the 100 Club, click here