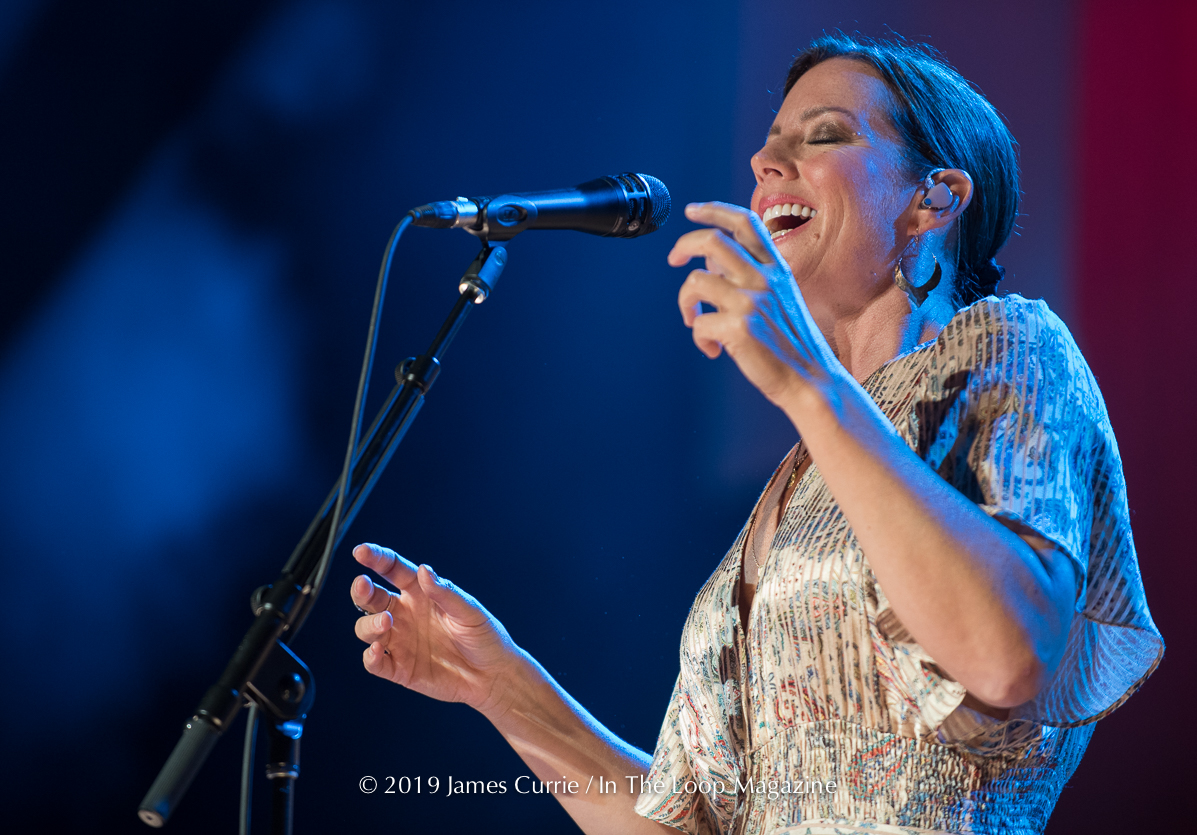 Multi-instrumentalist, Sarah McLachlan, finishing out her summer tour at Ravinia last night in Highland Park. She was joined on stage by her backing band and the Ravinia Festival Orchestra and performed a large collection of hits from her back catalog spanning just over 30 years. The house was packed despite it being warm and rainy throughout the performance, this was an evening with Sarah McLachlan.

Tonight was all about the Grammy award winning artist, as she was the only act on the bill. No need for an opener as she had enough stories and material to cover two sets. The first set was just about 35 minutes of music followed by another of about the same minus the encore. Throughout, we got her trademark eloquent depth of emotional feelings through songs.

Walking out barefoot, hair pulled back in a loose bun and wearing a stunning, long flowing elegant dress with patterns and textures in gold, she took center stage and thanked the fans for coming on this rather unpleasant weather night. This while showing her excitement for being here with a genuine smile running ear to ear.

Surrounded by her band taking position equally to each of her sides and conductor Sean O’Loughlin directly behind her, they started the show with a long running fan favorite that truly gave her start to the US market, “Possession”. An early 90’s MTV 120 Minutes classic.

From there, she turned around and sat at the massive grand piano behind her. She talked a little more about love songs and lost friendships then caressed the ivory keys and lovingly released, “I Will Remember You”.

The next number was a song she rarely talked about. “Adia” was introduced as a song about a time long ago when she was young and naïve and did something bad. She said, “This is not something I normally talk about, and haven’t in the past, but I’m ok with now. She continued with, “I wronged a friend with a boy (former drummer Ashwin Sood), but ended up marring and having children with him so it seemed right. Until we got a divorce and everything with that ended.” She went on to talk about how much pain it brought her on loosing that friend, but luckily, after time healed a few wounds, that friendship came back.

“Song For My Father” is well, a song she wrote about her father. She said, “I lost my father to cancer nearly ten years ago (she also lost her mother to the same disease in 2001). “I still think of him and miss him every day. This is a way for me to remember him and what he meant to me.”

Ending the first set on “Rivers of Love”, she got up from the piano, thanked the crowd and said she’d be back after a short break. After about 30 minutes the orchestra finished filling in followed by Sarah’s band and finally herself again taking center stage only this time wielding a guitar.

The second set started off with a song that was among numerous other accolades, the first track ever played on Apple’s iPod, “Building A Mystery” with went quickly into the next track, “Hold On”. McLachlan played through many other songs before ending the set on “Ice Cream”.

She came back with three encore songs, the final being the heart string tugger, and ASPCA anthem, “Angel”, before ending the night and the tour right here in northern Illinois.

When I first heard Sarah McLachlan live, it was over 25 years ago. A small venue on the northside of Chicago. She was with her band at the time that consisted of just 4 members. They more resembled a 90’s alt band than the eloquent songstress she eventually transitioned into. I saw her later at her festival, Lilith Fair, where again she again grew to new heights, but tonight, with a full orchestra behind her and knowing all she’s been through, it just felt like witnessing a star being reborn. Her confidence was strong. Her interactions precise. Her song selection a perfect pairing with the surrounding musicians. She is on top of her game in every way. This was the way to see her live.

Despite the muggy wet night, the fans took it all in with great stride. Outside the great sheltered pavilion, the masses huddled near each other under giant umbrellas making mini mushroom villages in the parkland. These are true fans. People who want to be here even on a Monday night in the rain.

The one song I would have loved to hear that we didn’t get was an early track from her second studio album, “Solace”, called, “Into The Fire”. That to this day is still one of my favorite tracks from Sarah McLachlan of all time. Here’s to the next tour and the possibility it makes the live cut.