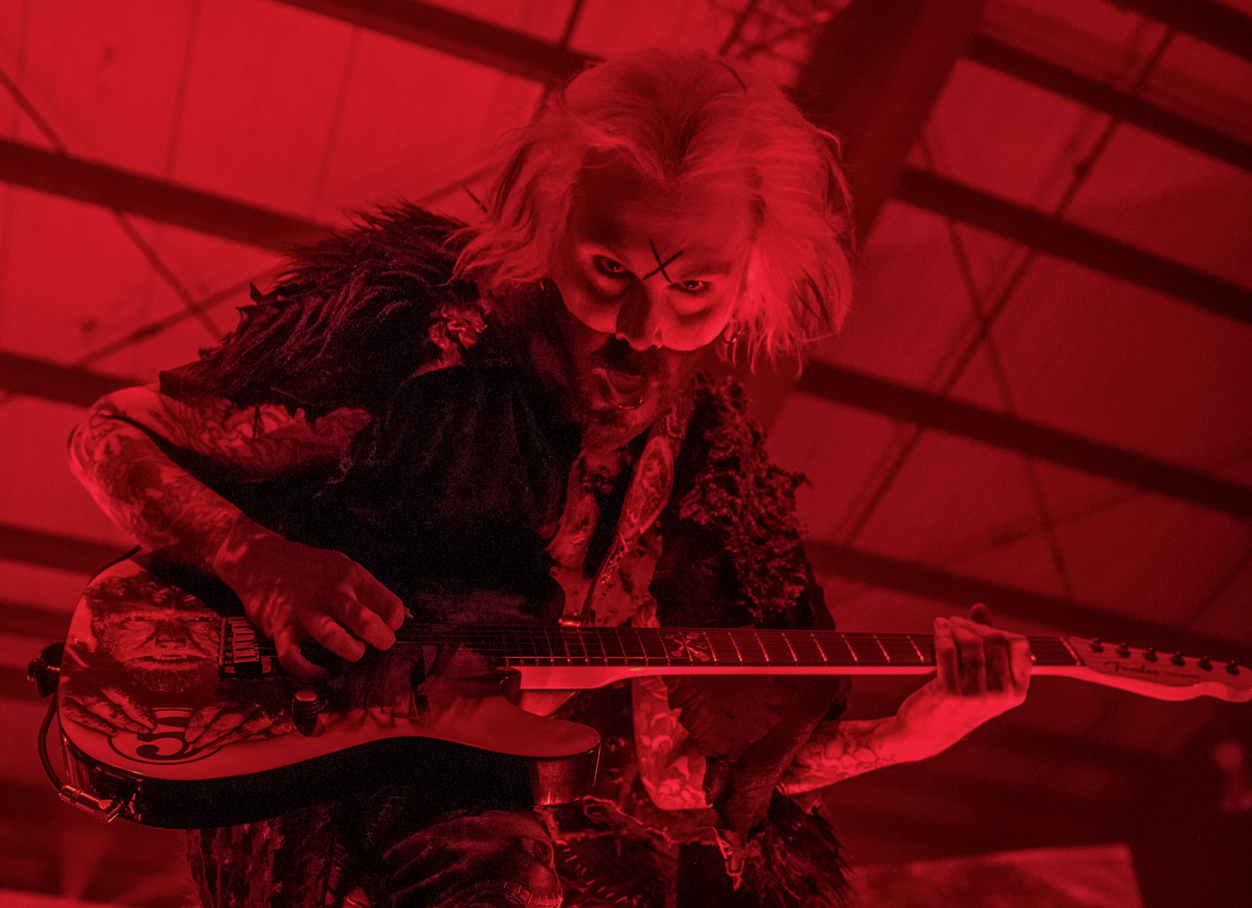 Rob Zombie’s Great American Nightmare returned to the Chicagoland area for a second year on Friday, October 2nd, and brought with it everything that spawns nightmares for just about everyone, as well as one of the most dynamic live shows you’ll see.

Last year’s inaugural GAN at the Odeum Expo Center in Villa Park was subject to a good deal of negative press, from fans who claimed it wasn’t scary enough to logistical issues like hours-long lines. Those issues – both the fear factor and the organizational concerns – have been addressed this year. A numbering system has solved the line problem, and as for the haunt itself…well. Bring a change of pants, people. From the time Dr. Satan and a nine-foot El Superbeasto greet you at the head of the line, it’s clear that you’re in the hands of someone who wants nothing more than to scare the absolute shit out of you by any means necessary.

The “house” is actually three separate, sequential experiences – not to mention an introduction that will leave all attendees disoriented, to say the least. (At the risk of disclosing TOO much, you may want to take the “Pussy Exit” and circumvent the intro if you’re someone who experiences vertigo.) First up is Captain Spaulding’s 3-D Clown School, where you’ll be ushered through a garishly painted maze of fantastic creatures, disturbing “lessons” for the budding psycho clown scrawled on the walls, and of course, the Captain himself, perhaps Zombie’s most recognizable film character. The 3-D effect is used to great effect in the Clown School maze, with images and colors popping out everywhere to create a ghostly aura throughout. There’s a firmly tongue-in-cheek, gag-reel kind of quality to this first third of the attraction…

…that disappears completely once you exit the Clown School and find yourself in front of the infamous Firefly farmhouse, blood-soaked residence of the Firefly family of House of 1000 Corpses and Devil’s Rejects fame. Following an immersive recreation of the sheriff’s raid that opens Rejects, attendees are led into the house, where the real scope and vision of Zombie’s hard work becomes apparent. The attention to detail is incredible, from dust on the book shelves to pages from magazines hung on the wall, to pieces of clothing and other ephemera that any Zombie fan will recognize from the Firefly clan’s film appearances. Of course, Otis, Baby, and Mother Firefly make their appearances, along with a sickening cast of characters that makes you feel…well, like you’re trapped in a Rob Zombie movie for thirty intense minutes of your life.

Escaping through the underground catacombs below the house (and passing a truly stunning animatronic super-beast on the way), the final third of the Great American Nightmare focuses on 31, Zombie’s forthcoming film slated for release in February. 31 focuses on a group of abducted carnival workers who are forced to survive Halloween night in “Murder World,” a desolate industrial wasteland populated by people and things whose focus remains squarely on filling their human slaughterhouse.

Murder World is not for the weak stomached individual, all the more grotesque for the fact that a variety of smells (rotting meat, death, and other foulness) are pumped into the rooms as you pass. The unfortunate victims of Murder World are as graphic as anything you’re likely to see, and may for a moment make you question the reality of what’s in front of you – small wonder, given that the various dismemberments and tortures on display were largely inspired by and designed around actual crime scenes photos. Bodies hang from hooks dressed like deer, a skinned woman staring in horror welcomes passersby into a meat locker, where you’re forced to push your way your way through – you guessed it – human carcasses. Murder World is a full-on assault, and features one of the most impressive creature puppets you’ll ever see in a commercial haunt – you’ll know it when you see it.

All of this, of course, was prologue on Friday night to Rob Zombie’s equally impressive live show, which treated goers to a excellent mix of material from all eras of Zombie’s career. Zombie is a musical ringmaster for the exploitation and b-movie set, and at this point, needs no introduction. Starting things off on a perfectly dark note with “Teenage Nosferatu Pussy” from 2013’s Venomous Rat Regeneration Vendor, there would have been little else on earth that could be a more perfect kickoff to the Halloween season than the spectacle of Zombie – the grand marshal of all things horror – and his band, who are stunningly tight. John 5 remains one of the most underrated rock guitarists out there, commanding the stage like a frontman in his own right, sporting a variety of accoutrements throughout the night, from light-up monster masks to a disturbing gas-mask ensemble that called to mind the coal-mine killer from the slasher classic My Bloody Valentine.  Ginger Fish – another crib from Marilyn Manson’s ‘classic’ lineup – is given far more room to show his chops in Zombie’s band, and together with bassist Piggy D, the quartet is fiercely in-sync with each other. Throughout the costume changes, John and Piggy both had an arsenal of guitars to compliment this show ranging from classic universal monsters to AK47 machine gun. They smoothly switched them out every other song.

Seeing Zombie and crew tear through everything from standbys like “Superbeast” and “Pussy Liquor” to lesser known tracks like “Demon Speeding” almost made you wish that the haunt could accompany the band everywhere, as they were clearly having a great time in context, exchanging laughs and smiles, taking in the atmosphere of the event from start to finish. Taking a cue from the interactive nature of the Great American Nightmare itself, John 5’s stunningly intricate guitar solo provided the backdrop for Zombie’s march through the crowd with a floodlight, literally walking through the crowd from one end of the stage and all the way around the entire venue, slapping hands, rousing the already frenzied crowd, and bringing the entire place closer together. By the time he returned to the stage for a skull-crushing finale of “Thunder Kiss ‘65,” White Zombie breakthrough hit, “The Lords of Salem,” and Hellbilly classic “Dragula,” you could almost have forgotten the sound of screams, wails, and other cacophony that seemed to still echo through the venue from the haunt upstairs.

Although, let’s be honest. Once you’ve seen the Great American Nightmare, there’s no forgetting it. And I’m sure that its creator would have it no other way. 2016 is shaping up to be a big year for Zombie, with a new movie and record that he promised onstage are “really fucked up,” so there’s no better way to prepare yourself than by taking a tour of his head and doing Halloween up right.

And don’t forget your extra pants.

For photos of the haunted house attraction, click here.

For photos of the performance at the Odeum, click here.

For more information on Rob Zombie, his tour and music, click here.