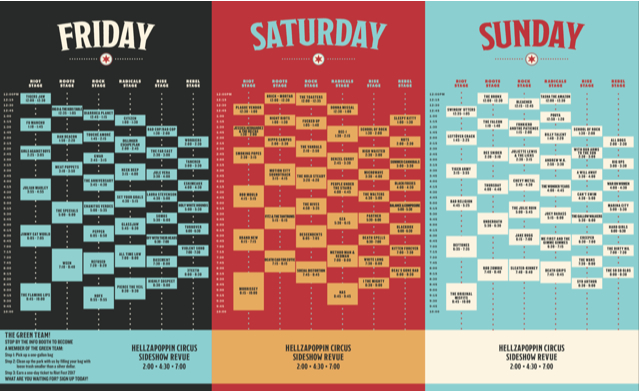 The good folks over at Riot Fest have released the daily lineups for this years Riot Fest Chicago. You can go over to their site and view it all in one sitting or better yet, create your own daily list with their handy little app.

For more on who’s gonna be where, click here

Riot Fest has announced the daily band schedules for Riot Fest & Carnival in Chicago: check them out here. Headliners include Flaming Lips, NOFX & Pierce the Veil Friday, Morrissey, Death Cab for Cutie, Social Distortion and Nas on Saturday and The Original Misfits, Rob Zombie, Sleater-Kinney and Death Grips closing out the festival on Sunday.

Riot Fest Chicago closes out the summer with a with a line up unlike any other festival. In addition to offering up artists that appeal to a wide range of fans, Riot Fest continues to have something for everyone, including Hellzapoppin Sideshow Review, a Ferris Wheel and Carnival games, and excellent food and beverage options.

Outside of several reunions, including The Original Misfits, Thursday, Set Your Goals,  The Anniversary and a rare appearance by Girls Against Boys ; several bands and artists will be performing their quintessential albums during Riot Fest 2016.  Most notably, Julian Marley will perform Bob Marley & the Wailers’ Exodus on Friday, Social Distortion will be exclusively performing White Light, White Heat, White Trash on the exact date of the album’s initial release (Sept. 17, 1996) for a special 20th Anniversary performance in Chicago on Saturday while Rob Zombie’s first Riot Fest appearance will include an unexpected and exclusive album play of White Zombie’s Astro-Creep: 2000 on Sunday while The Hold Steady will also play (Boys and Girls in America) Saturday night.